OWA is a Spokane, Washington, business founded in 1979 and now a leading distributor of Christmas related products with showrooms in Atlanta, Las Vegas, and Dallas.  OWA’s products include glass Christmas tree ornaments, holiday nutcrackers, greeting cards, and framed holiday prints.  Defendant KWO maintains a place of business in Duluth, Georgia, and Gump has a place of business in San Francisco.

According to the complaint, OWA creates original designs for its products, portrays them in photographs in published catalogs, including its 1998 and 1998 editions which were registered with the United States Copyright Office – Registration Numbers TX 4-837-270 and TX 4-990-940. Included in those catalogs were photos of OWA’s “Alpine Skier” nutcracker (the “Work”).

OWA contracted with KWO to manufacture the Work in the past, but is not currently sourcing the product from KWO.  OWA alleges that KWO has “recently begun to produce, distribute, and offer for sale . . . a nutcracker . . . identical or substantially similar to [the Work].”  The complaint includes as Exhibit 2 side by side photos of the original OWA Work and the KWO accused infringing nutcracker for comparison.  Those photos appear below as denominated by OWA. 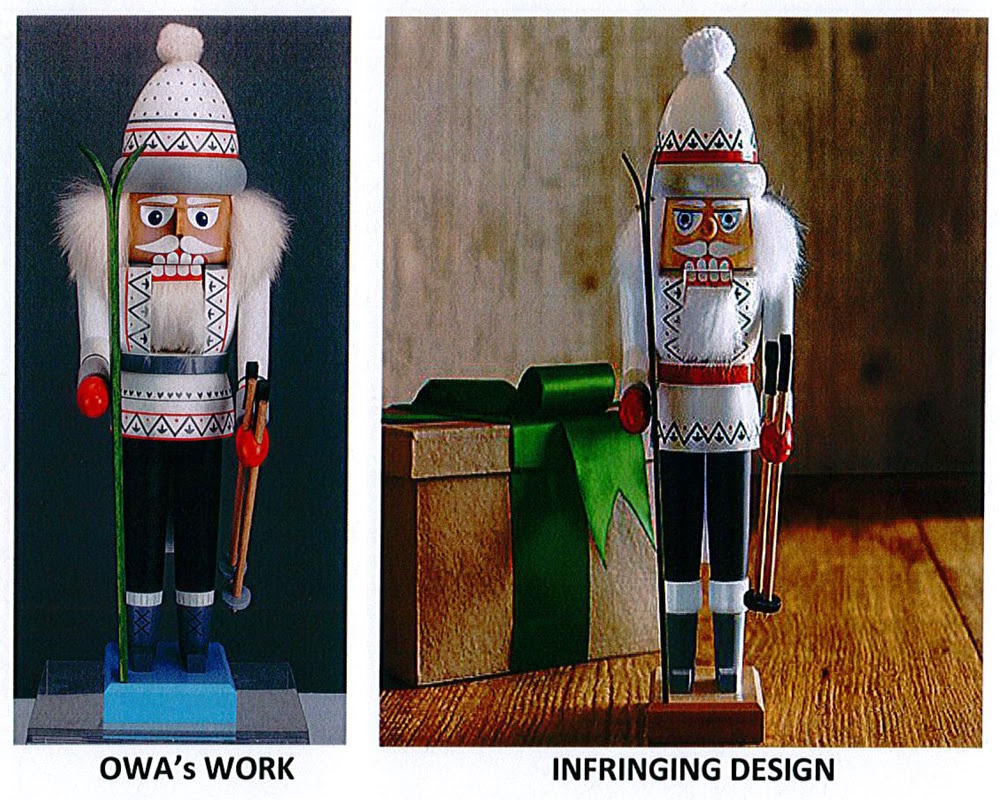 The complaint goes on to allege that Gump is distributing infringing nutcrackers sourced from KWO.  Defendants are accused of willful infringement.  OWA seeks an injunction and damages, further mandating Defendants to advertise that the infringing goods sold violate OWA’s copyrights

U.S. Supreme Court to Review Copyrightability of Privately-Produced Annotated State Statutory Compilations
By
Susan Neuberger Weller
Photographer Alleges Copyright Infringer Used Unauthorized Photo For Road Atlas And, When Caught, Offered $10 As Compensation
By
Intellectual Property
Folks Alleges Jim ‘N Nick’s B B Que South, Inc.’s Use of GOOD TO GO MARK Should Get Up and Go
By
Intellectual Property
Singer-Songwriter Lee Hutson Sues Rapper Young Jeezy Over Alleged Use of "Getting It On" Sample
By
Preston H. Heard
Advertisement