The Overlap of Drug Pricing Proposals

On September 19, 2019, Speaker of the US House of Representatives, Nancy Pelosi (D-CA), released a much- and long-anticipated proposal to contain federal and individual spending on prescription drugs.  Generally, the draft bill, designated H.R.3 and called the “Lower Drug Costs Now Act of 2019,” includes the following provisions:

With the Speaker’s plan now public, reaction from other Members of Congress, the Administration, and health care stakeholders becomes critical.

On the Democratic side, the Speaker may face progressive members who will say this plan does not go far enough. For example, an earlier version of the Pelosi package that was previously leaked included price negotiation for 250 brand-named drugs. The updated version sets the minimum number of brand-named drugs eligible for negotiation at 25 and the maximum at 250. (The Secretary of Health and Human Services will determine the number of drugs subject to negotiation.) On the other hand, moderate Democrats may believe that the Pelosi plan is a step too far, and refuse to support the measure. Without Republican support, which is not expected, it is far from clear that the Speaker can coble together an adequate number of votes among Democrats to pass her proposal through the House.

What is arguably more interesting, and potentially more important, is how the Administration and Senate Republicans who support the Grassley-Wyden prescription drug pricing package (which was approved by the Senate Finance Committee in July) react to the Pelosi bill. A compromise could be possible between Pelosi, Grassley-Wyden, and the Administration. There is significant overlap between the Pelosi bill and the Grassley-Wyden bill. Additionally, the Administration has indicated its support for Grassley-Wyden, and is pursuing its own similar drug pricing reforms through regulation, including the International Pricing Index (IPI) model. Examining where these proposal converge and diverge in a Venn diagram demonstrates considerable alignment among these disparate players.

**Please note, our assumptions are that the Administrations supports all provisions within the Grassley-Wyden proposal. Additionally, we are basing the information of the Grassley-Wyden and Pelosi packages off proposal summaries. As a result, there are general topic areas that the proposals are in agreement on, but the specifics in implementing the provisions could vary. Finally, the direct-to-consumer advertising reforms as outlined in the Trump Administration regulation, which was overturned in federal court, are not in the Grassley-Wyden proposal. However, Senator Grassley has indicated support for legislation that adopts these provisions. 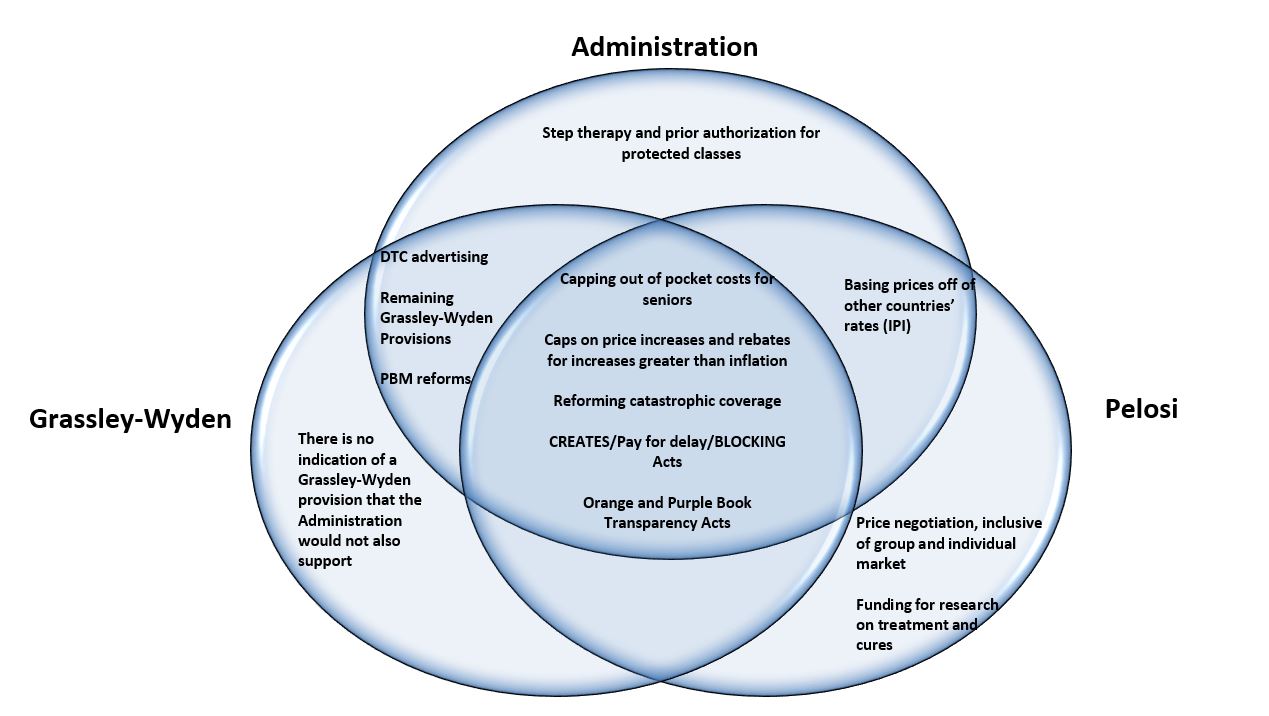 Based on the above Venn diagram, it is totally plausible that a prescription drug pricing package could come together. The policy overlap for a significant package is clearly there.

First, there are significant overlaps between the Grassley-Wyden and Pelosi proposals. Both parties want to address a similar set of issues; however, the specifics in implementing the policies could vary between the groups. Areas of overlap in both proposals include provisions to cap out-of-pocket prescription drug costs for Medicare beneficiaries, provisions to reform catastrophic coverage and how it is paid for, and provisions to include inflationary caps on prescription drug price increases. Additionally, let’s not forget that there already are bipartisan and bicameral prescription drug policies, including the CREATES Act, BLOCKING Act, pay for delay, and the updates to the Orange and Purple Book. These policies are considered consensus provisions and can easily be included in any prescription drug package. These policies combined could represent the core of a drug pricing package that could be signed into law.

Then there is the overlap between the Administration and the Pelosi package. The most striking overlap is the interest in pegging drug prices to other countries’ rates. The Pelosi plan that was released today is a step back from the previously leaked version. The updated version mandates that only 25 brand-named drugs (and a maximum 250 brand-named drugs) be subject to price negotiation.  The maximum price negotiated for the drugs would be tied to the cost paid in other developed countries. Additionally, the Trump Administration is actively developing a regulation to test phasing down the current Medicare payment amount for selected Part B drugs to more closely align with international prices. While this is clearly an area of controversy, there may be potential for a small pilot, perhaps within Medicare Part B, to subject certain drugs to costs paid in other developed countries.

There is also the Administration’s direct-to-consumer (DTC) advertising regulation, which would have required drug manufacturers to include list prices in DTC advertisements. This regulation was ultimately overruled in federal court. However, since that time, Senator Grassley has indicted support for legislation implementing this regulation. So although it is not technically in the Grassley-Wyden proposal, it could be introduced in negotiations.

It is also worth noting that there could be more overlap between the Grassley-Wyden and Pelosi proposals than what we can determine based on only having the summary of the Grassley-Wyden proposal available and not legislative text.

The remaining measures that fall under only one stakeholder include the Administration’s regulation to implement step therapy and prior authorization for certain drugs within the protected classes, and Pelosi’s concepts on Medicare price negotiation and increased funding for research, treatment, and cures. Although some of these policies may not be an area for common ground, other provisions can find their way into negotiations.

Clearly, there is plausible ground for agreement between the Speaker, the Senate Finance Committee leaders, and the Administration. What is less clear is if there is political interest in reaching the policy agreement. And any gains made between these three groups could be completely shattered by a ruling in the Texas v. Azar case.

It’s definitely an interesting time to be in health policy!

Katie works with clients to represent their needs before the US Congress and the US Department of Health and Human Services (HHS) and its agencies by relying on extensive experience as a policy advisor on the Medicaid and Medicare programs, as well as the 340B program and other aspects of the Public Health Service Act. She anticipates the effects of state and federal policymaking on issues impacting their businesses and...

Rodney is an accomplished health care executive with more than two decades on the Hill where he specialized in rural health, the health care safety net and disability policy.

With nearly 25 years of experience, Rodney possesses and offers clients the kind of knowledge that is uniquely available to those who have drafted and advanced legislation. He strategically guides clients through dense Medicare and Medicaid issues that have significant business impact.

Eric Zimmerman is a partner in the law firm of McDermott Will & Emery LLP and is based in the Firm's Washington, D.C. office.  Eric is co-chair of the Firm’s Life Sciences Government Strategies team, and is a member of the Firm’s Government Strategies practice and Personalized Medicine team.  Eric is a recognized Medicare law and policy authority who helps clients navigate federal legislative and regulatory processes related to Medicare coverage, coding, reimbursement and compliance.  He primarily counsels and represents hospitals and health...