SEC: A “Record Year for Whistleblowers”

Going into 2020 there was tremendous apprehension among whistleblowers and their advocates that the U.S. Securities and Exchange Commission may turn the clock back on holding Wall Street accountable.  The Commission had proposed a series of rule changes that would have devastated the Dodd-Frank Act reward program, including limits on large awards and technical requirements that could have disqualified a majority of whistleblowers from obtaining rewards simply by filling out the wrong form.

By year’s end, these fears never came to pass.  The opposite happened.  In its Annual Report for Fiscal Year 2020, the SEC’s Enforcement Division proudly proclaimed that 2020 was a “record year for the Whistleblower Program.”  They were correct.  The Enforcement Division explained that the Dodd-Frank Act reward program triggered “whistleblower tips” that “resulted in numerous high-quality enforcement actions.”  By the end of Fiscal Year 2020, the Commission had awarded $562 million in awards to whistleblowers whose original information held corporate fraudsters accountable.

Significantly, in FY 2020, more whistleblower rewards were granted than in any other year ($175 million in total awards to 39 individuals).   As the Enforcement Division noted, these awards represented a  “200% increase in the number of individuals awarded in a single year over the next-highest year.”  The $175 million in awards paid was also a record.  In October 2020 (just after the Fiscal Year ended on September 30th), the Commission issued the largest SEC award ever,  $114 million paid to a single whistleblower.  Another historic milestone. 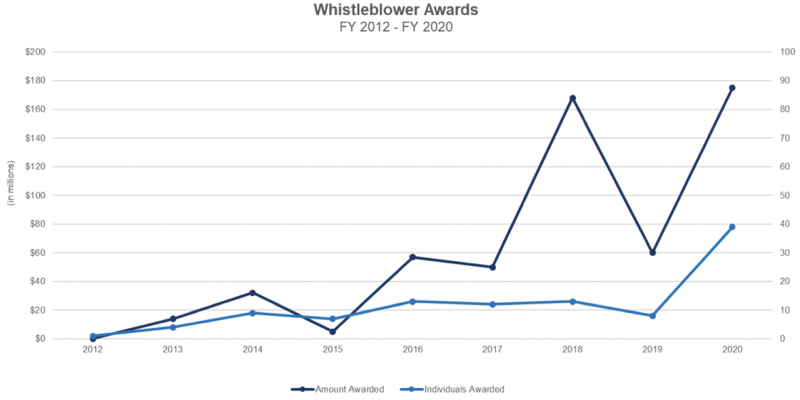 These achievements were all obtained due to the importance of incentivizing whistleblowers to come forward with evidence of fraud, protecting whistleblower identities and confidentiality, and honestly conducting investigations into some of the most powerful corporate interested in the world.  The SEC Enforcement Division confirmed that “ over the past ten years, the whistleblower program has been a critical component of the Commission’s efforts to detect wrongdoing and protect investors in the marketplace, particularly where fraud is concealed or difficult to detect.”   The success of the program was confirmed by the statistics published by the  Enforcement Division:  “whistleblower tips have resulted in more than $2.5 billion in ordered financial remedies, including more than $1.4 billion in disgorgement of which almost $750 million has been, or is scheduled to be, returned to harmed investors.” 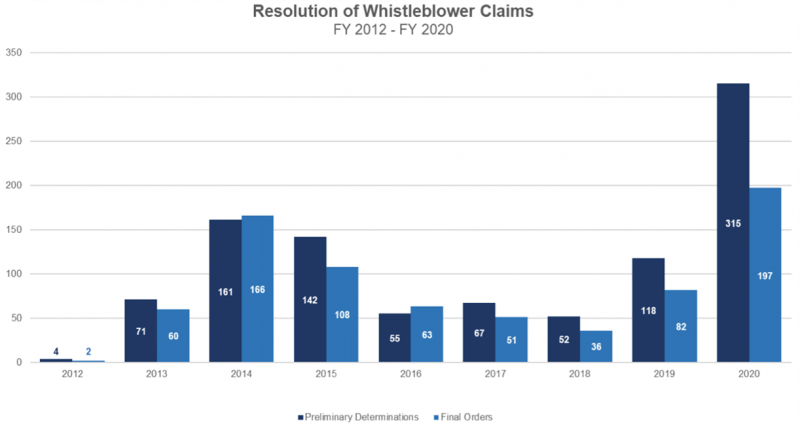 Recognizing the importance of rewarding meritorious SEC whistleblowers in a timely manner, the Enforcement Division made efforts to streamline and substantially accelerate the evaluation of claims for whistleblower awards. These efforts paid off. The fiscal Year 2020 was a record-breaking year for the whistleblower program. The Commission issued awards totaling approximately $175 million to 39 individuals, both greater than any other year in the program’s history.