On Thursday, November 21, Judge Moon heard arguments on summary judgment motions in a case challenging Charlottesville's panhandling ban under the First Amendment.  Judge Moon had originally dismissed the case, but the Fourth Circuit reversed that decision in February. 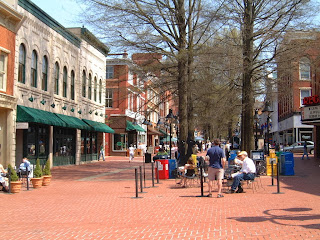 The arguments during the summary judgment hearing focused on whether the City targeted a specific form of speech or whether the City regulated speech in a neutral way, and whether the ban was broader than reasonably necessary.  The ordinance bans panhandling within 50 feet of two vehicle crossings on the Downtown Mall.  The City justifies the ban as a content-neutral regulation that protects public safety.

The Daily Progress quotes Judge Moon as saying: "The way I see this case, frankly, is whether 50 feet, on either side is too much....  I thought the big problem would be the distraction to divers and the danger to pedestrians."

Counsel for the plaintiffs -- a group of homeless men who want to panhandle on the Downtown Mall -- argued "Panhandlers, for the most part, including my clients, sit passively with a sign along the walls of the Downtown Mall.  They don't stop people."

The attorney for the City of Charlottesville argued that the 50 foot ban was reasonable, especially given the other areas where panhandling is allowed: "What we are dealing with is 200 feet total ... on two crossings on a mall that is one-third of a mile long and 60 feet wide."

Judge Moon not expected to rule for another two months.  Trial is scheduled in the Western District of Virginia for March 3, 2014.