One of the many recent targets of Twitter criticism from President Trump has been the internet retailer Amazon.  Presumably after being informed by his staff that jobs in the retail industry constitute a much more significant share of national employment than those in coal mining (or after hearing about it on CNN), Mr. Trump posted the following tweet on August 16:

This followed Trump’s tweet from June 28, which is the most recent one in which Mr. Trump accuses Amazon of not paying “internet taxes”: 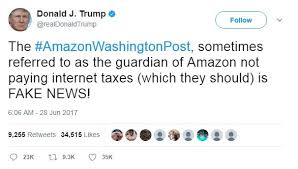 The President is, however, correct that online vendors should be subject to the same requirement as their brick-and-mortar competitors to collect and remit sale/use taxes.  As more consumers purchase items online, rather than at physical stores, the collection and remission of sales/use taxes has plummeted.  The demand both for governmental services (especially in light of the jobs in the retail services sector that have been, and will continue to be, lost as consumer buy more goods online) rendered by state and local governments and for the repayment of debt issued by these governmental entities has not abated.

The U.S. Supreme Court held in Quill Corp. v. North Dakota, 504 U.S. 298 (1992), that, under the dormant Commerce Clause, an online vendor does not have to collect and remit sales/use tax on sales made to customers who reside in a given state unless the vendor has a physical presence in that state.  Congress, which has absolute power to regulate interstate commerce and can therefore overrule a Supreme Court decision issued under the dormant Commerce Clause, has considered in its last several sessions bills that would overrule Quill, but it is unlikely that Congress will ever pass this legislation if the Supreme Court does not overrule Quill.

It will be very interesting to see whether the U.S. Supreme Court would overrule Quill if the South Dakota case comes before the Court.  Under the Court’s current composition, there would be at least three Justices who would very likely side with South Dakota – Justices Kennedy, Thomas, and Gorsuch.  Justice Kennedy in a concurrence in Direct Marketing Association v. Brohl, 575 U.S. ___ (2015), invited a future challenge of the Quill decision and noted that both he and Justice Thomas had concurred in Quill’s result based solely on the doctrine of stare decisis in upholding the prior case law upon which Quill was based, rather than agreement with the substantive principle involved.  Moreover, Justices Thomas and Gorsuch view the dormant Commerce Clause as a judicially crafted monstrosity without basis in the text of the Constitution.  Perhaps two more Justices will join Justices Kennedy, Thomas, and Gorsuch to overrule Quill and force Congress into action on a matter over which, pursuant to the actual (awake?) Commerce Clause in Article I, Section 8, Clause 3 of the Constitution, it has absolute power.

[1] All states other than New Hampshire, Oregon, Montana, Alaska, and Delaware levy a sales/use tax.  You can remember the states that lack a sales/use tax by the mnemonic N.O.M.A.D.  You’re welcome.

Michael Cullers focuses his practice on matters involving tax-exempt bonds and state and local taxation. Michael has extensive experience in the tax aspects of state and local bond issues, including governmental use bonds, qualified 501(c)(3) bonds and other tax-exempt private activity bonds, such as airport financings, as well as tax-advantaged bonds, such as Build America Bonds and qualified school construction bonds. This experience includes private business use and private payment analyses; arbitrage issues in new money, refunding and multipurpose bond issues;...