Like CIPA, the case law around the FTSA is still developing. That allows folks to make some clever arguments in a bid to limit the scope of the statute while the law is still in formation. And I LOVE that.

Unfortunately some arguments–no matter how valid–are going to fall on deaf ears out of the gate. Although they may pick up steam down the road.

Now this may seem like a bad argument–I mean how are college courses not a consumer “service”?–but the definition of “consumer goods or services” in the FTSA is actually really weird and narrow. They are defined as “real property or tangible or intangible personal property that is normally used for personal, family, or household purposes[.]” Fla. Stat. § 501.059(1)(c)

SO even though the word “service” is in the statutory language it is NOT within the applicable definition. Weird right?

Its sort of like the TCPA banning the use of automatic telephone dialing systems but the the word “automatic” does not actually appear in the statutory definition and it took a trip to the Supreme Court to confirm that the “automaticness” of a dialer doesn’t event matter.

So under the FTSA, perhaps, a call offering nothing but a consumer service cannot be a “consumer good or service” because it is not property. Interesting, no?

Well, interesting or not, the courts just aren’t there yet. Or at least the Leiegue court wasn’t.

After noting that neither the Plaintiff nor the Defense had cited any valid case law the Court simply fell back on the assumption that the legislature had intended to ban calls regarding college courses because it hadn’t expressly exempted them, as it had in another provision of the FTSA.

But the fact that the Legislature did exempt such calls in a different section of the FTSA actually tends to prove that the definition does not include service calls of the type being made here–that’s why, the argument goes, the Legislature didn’t have to enact a specific exemption, they were never covered in the first place!

Either way, however, the Leigue court held that calls by the EDU sector are covered by the FTSA. So… sorry. Not a bad swing though, even if it was a miss.

There’s a second major piece to this case as well. The Plaintiff in Leigue had accepted the following disclosure prior to receiving the calls at issue:

By clicking the “Request Info” button, I consent to calls, emails and texts from Keiser University at the phone number that I have provided and some of these calls may occur from automated technology

The Court, however, held that this consent was invalid because it did not specifically reference marketing or telephone solicitation calls. This is the same rule under the TCPA, so it should not be a surprise to anyone. But please keep in mind you need to abide the FULL “Troutman Nine” (soon to be the R.E.A.C.H. Nine) to be safe. 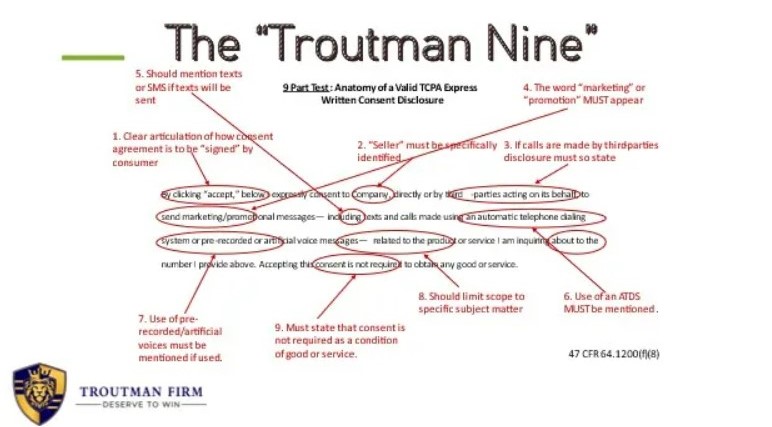 So the FTSA train keeps rolling. As a reminder the statute applies to calls made to ANY Florida consumer–even if the caller is out of the state!

Stay safe out there TCPAWorld.

Eric J Troutman is known as one of the country’s prominent class action defense lawyers and is nationally recognized in Telephone Consumer Protection Act (TCPA) litigation and compliance. He has served as lead defense counsel in more than 70 national TCPA class actions and has litigated nearly a thousand individual TCPA cases in his role as national strategic litigation counsel for major banks and finance companies. Eric also helps industry participants build TCPA-compliant processes, policies, and systems.

Eric's perspective allows him to...