In Terral River Serv. v. SCF Marine, Inc., the US Court of Appeals for the Fifth Circuit affirmed a district court’s grant of summary judgment dismissing claims brought by a loading facility, Terral River Service, Inc. (Terral), against the owner of a cargo barge that sank while secured at Terral’s facility, even though Terral alleged that the barge sank as a result of a fracture in the hull that pre-existed the barge’s delivery to the facility. 20 F.4th 1015 (5th Cir. 2021); 2021 AMC 458. Two main lessons can be drawn from this case for loading facilities.

1. A loading facility bears the burden of proving that a latent unseaworthy condition pre-existed delivery when seeking recovery of costs incurred to salvage a barge that has sunk at the facility.

When attempting to recover costs incurred as a result of damage sustained to a barge after delivery due to a latent unseaworthy condition, loading facilities should be mindful of the fact that they carry the burden of proving that the unseaworthy condition responsible for the damage pre-existed delivery.

Compare this to the more traditional version of a bailment dispute, where the bailor-owner sues the bailee for damage sustained in the bailee’s care. There, a rebuttable presumption of fault applies and requires the party being sued (the bailee) to prove either (1) that the cause of the damage was something other than its own negligence or (2) that it treated the bailed article with reasonable care.

If a loading facility has incurred damages, such as salvage costs, arising out of a latent unseaworthy condition that pre-existed delivery of a barge, such as a fracture in the barge’s hull that is not readily apparent to the naked eye and causes the barge to sink at the facility, the rebuttable presumption of fault discussed above will not apply to shift the burden of proof to the bailor-owner, because the presumption only applies in the traditional bailment scenario — when a bailor-owner sues the bailee (i.e., when the barge owner sues the loading facility for the damage to a barge).

Therefore, a loading facility in a similar situation should immediately retain experts, such as engineers and metallurgists, to inspect the damaged barge if the damage may have resulted from a latent unseaworthy condition. These front-end costs will pay off by permitting the loading facility to carry its burden of proof at trial.

2. A loading facility cannot bring a salvage claim against the owner of a barge that has sunk at the facility, because the facility owes the owner a pre-existing duty of care arising out of the bailment relationship.

Analysis of the Decision

Before the barge was delivered, its owner, SCF Marine, Inc. (SCF), had the barge cleaned by C&M Marine, Inc. (C&M), on May 2, 2018. Id. at *1. The court characterized this cleaning as an inspection because C&M completed a report on the condition of the barge, particularly with respect to C&M finding no leaks in the hull and only trace amounts of water in the void tanks. Id. at *1–*2.

After the C&M inspection, the empty barge was towed and delivered to Terral’s facility without incident. Id. at *2. After Terral took custody of the barge, a Terral employee inspected it and completed a report on its condition on May 7, 2018. Id. He claimed that he inspected the barge’s knuckles and void tanks and that he saw no water or sunlight in the void tanks, which would have indicated a fracture in the barge’s hull. Id.

After Terral incurred costs retaining a salvor to raise the barge, a fracture that was 12 inches long and three-quarters of an inch wide was discovered on the port bow rake knuckle, which was covering a void tank. Id. at *2–*3. Green marks surrounded the site of the fracture, as well. Id. at *3.

Terral brought claims for general maritime negligence, unseaworthiness, breach of contract, contribution, and indemnity against SCF on the basis that the fracture allegedly pre-existed delivery of the barge to Terral by about two to four weeks. Id. at 3. Terral also claimed salvage for recovery of SCF’s barge. Id.

a. Burden of Proof

Terral primarily argued that the bailment relationship should operate to shift the burden of proof to SCF as the party being sued for damage in connection with a bailment relationship. Id. However, this case differs from the traditional bailment case because here, the bailee is suing the bailor for damages, instead of the other way around. Id.

As discussed above in the “Lessons Learned” section, in the traditional version of a bailment dispute, the bailor-owner sues the bailee for damage sustained in the bailee’s care. There, a rebuttable presumption of fault applies and requires the party being sued (the bailee) to prove either (1) that the cause of the damage was something other than its own negligence or (2) that it treated the bailed article with reasonable care. Id. (citing Richmond Sand & Gravel Corp. v. Tidewater Const. Corp., 170 F.2d 392, 393 (4th Cir. 1948)).

Consequently, in bailment suits, the party being sued more often than not carries the burden of proving that it did not cause the subject damage. However, this case is not a traditional bailment dispute, because bailee Terral sued bailor SCF for mitigation costs arising out of damage to the bailor’s property discovered while in the custody of the bailee. Id.

The Fifth Circuit found similarities between this unusual bailment dispute — i.e., a bailee suing a bailor — and the more familiar situation involving a charterer suing a vessel owner for breaching its duty to provide a seaworthy vessel, in which action the burden of proving the breach rests on the claimant. Id. at 5. Similarly, the Terral River court concluded that Terral, as the claimant, bore the burden of proving that the barge was unseaworthy at the time it took custody and control of the barge. Id. at 5–6.

b. Substantive Arguments Regarding the Timing of the Fracture

In support of its theory that the fracture pre-existed delivery, Terral offered two main arguments: (1) the Terral employee’s inspection conducted at the time of delivery was performed from the deck of the barge, which would not provide him an adequate angle to see a fracture in the hull, and (2) Terral’s expert testified that the green marks around the site of the fracture indicated that the fracture was caused by a collision with a green object, and there was no green object in Terral’s facility that could have caused the fracture. Id. at 7.

The court disposed of the first argument by noting that the Terral employee’s inspection procedures included looking for water and sunlight in the void tank, which would have indicated a fracture. Id. The court also noted that Terral’s second argument was not sufficiently persuasive to satisfy an essential element of its case — that the fracture occurred prior to delivery. Id.

The court also considered the evidence presented by SCF, and particularly the fact that no fracture was discovered during the C&M inspection five days prior to delivery. Id. at 6. The court did not appear to strongly weigh the possibility that neither the C&M nor the Terral inspections were sufficiently thorough to discover a fracture on the bow rake knuckle. The diagram below indicates the location of the rake knuckle. It is not difficult to imagine that a routine visual inspection performed from the deck of a barge would not discover this latent defect. 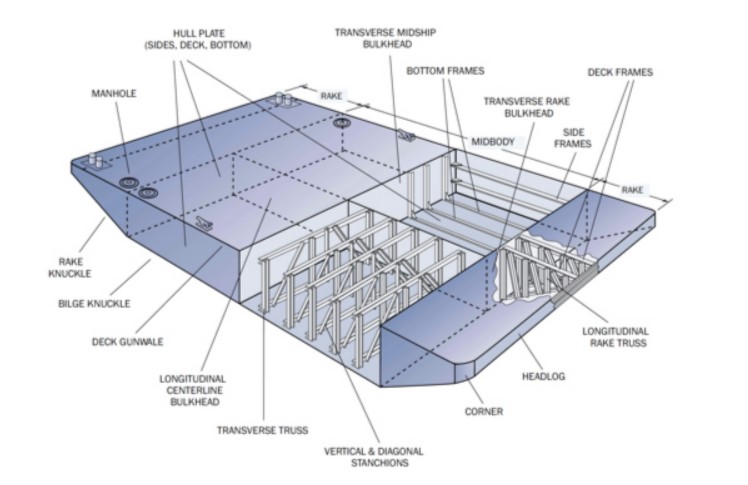 Terral theorized that the fracture existed or arose during the voyage to the loading facility. Due to the barge’s low draft while empty, the fracture caused no problems in transit. It was only after the barge was partially loaded with rice at Terral’s facility that the barge’s draft increased, the fracture reached the water level, and the barge sank.

Terral’s expert metallurgist’s testimony regarding the timing of the creation of the fracture and its pre-existence of delivery was stricken for the metallurgist’s failure to inspect and test the fracture before it was repaired. W.D. La., Case No. 3:19-cv-00406, Rec. Doc. 109-1, at p. 11 (“[Terral’s metallurgist] did not perform any testing, conduct any experiments, or interpret any specialized literature. … [H]is testimony should be excluded under Rule 702.”). In the absence of direct evidence of the timing of the fracture’s creation, the court treated the C&M inspection as more significant evidence than perhaps it should have, considering that it was merely a cleaning, not a formal marine inspection, and the fact that no direct evidence of the condition of the barge during the C&M inspection was presented. W.D. La., Case No. 3:19-cv-00406, Rec. Doc. 63, Plaintiffs’ Memorandum in Opposition to Motion for Summary Judgment, at p. 9 (“The only witness to testify about the C&M report is the owner of the company, … who has no personal knowledge of the barge generally, the scope of the inspection, or the condition of the barge during such inspection or any other time.”).

Ultimately, the Terral River court concluded that Terral’s inability to present evidence of the fracture pre-existing delivery precluded its non-salvage claims from succeeding, and it affirmed the district court’s summary judgment dismissing Terral’s claims. Id. at 8.

Finally, the court disposed of Terral’s salvage claim on the grounds that a salvage claim has three elements — (1) marine peril; (2) service voluntarily rendered when not required by an existing duty or special contract; and (3) success in whole or in part, or that the service rendered contributed to such success — and Terral’s pre-existing duty of ordinary care owed as the barge’s bailee to SCF precludes recovery. Id. at 9.

This case presents an uncommon dispute arising out of a bailment relationship, as the bailor-owner is ordinarily the complaining party when damage to its property is discovered while in the care of a bailee. For that reason, this case will have limited application moving forward.

That said, the main lesson to draw from this case is that bailees in the maritime context that believe that damage sustained to property in their custody resulted from a latent defect that pre-existed delivery will have the burden of proof on their claims against the bailor. Therefore, upon discovery of a casualty, loading facilities should immediately appoint experts, such as engineers and metallurgists, to inspect significant barge damage discovered in their custody when a question exists as to causation. If the loading facility incurs costs to mitigate this damage, the significant benefit provided by expert testimony in carrying the bailee’s burden of proof in litigation will vastly outweigh the initial cost of retaining expert services.

Additionally, this case establishes that barge owners and loading facilities alike should regularly perform and document thorough inspections of barges that will be the subject of bailment arrangements, particularly at the time of delivery to the bailee. Additionally, the use of specialized inspection equipment would help ensure discovery of latent defects in areas of the hull that may otherwise go unnoticed, such as the rake knuckle.

Andy focuses his practice on representing and advising domestic and multinational shipping companies, insurers, and underwriters in brown water, blue water, and offshore energy matters regarding maritime and admiralty litigation, insurance, and indemnity. Andy assists in a broad range of disputes, including vessel collisions and allisions, cargo claims, charter party and commercial disputes, and personal injuries. He also assists clients in regulatory issues arising out of business operations before government agencies such as the United States Coast Guard, Office of...