Judge Steve C. Jones entered a Markman Order (full order here) in the dispute between Synchrome Technology Inc. (“Synchrome”), as plaintiff, and Toshiba America Information Systems, Inc. (“Toshiba”), and Samsung Semiconductor, Inc. (“Samsung”), as defendants.  The Court construed the disputed terms of U.S. Patent No. 6,304,925 (the ‘925 patent), titled “Method and Apparatus for Allowing Communication Between a Host Computer and At Least Two Storage Devices Over a Single Interface.”  The patent issued on October 16, 2001, claiming priority to November 13, 1990.

Judge Jones’ Order assesses the parties’ positions on seven disputed claim terms where Synchrome seeks to ensure that its patent claims cover evolving technologies within the claim language and Toshiba and Samsung seek to ensure that the patent is not extended to technologies unknown to the person or ordinary skill at the time of the original invention.

This case is a study in the boundaries of patents in fields of rapidly progressing technologies, where the landscape looks entirely different toward the end of the patent term than it did at the time of the patent's issuance.  Judge Jones takes a careful, analytical approach that provides different results on different terms and may serve to guide current prosecutors in drafting patents and inspire inventors to describe anticipated future technologies in their patents. The approach implemented by Judge Jones, while highly specific to the circumstances of the technologies at issue, is broad in its applicability to broadly worded claims.

The Specific Circumstances of the Case

The Synchrome ‘925 patent solved a peculiar limitation of computer storage connectivity prevalent in the late 1980’s (and early 1990’s).  In that period computers had a limited number of card slots available for connecting data storage devices (floppy disks, tape drives, etc.).  The floppy disk interface allowed two separate device connections but at a slow rate.  In the late 1980’s the rate was greatly improved by the development of the Intelligent Device Electronics (“IDE”), which could also support two data storage devices.  However, the IDE only allowed access to one device at a time, setting a bit (the “BUSY bit”) that prevented communication with the second device until communications with the first device were complete.  The ‘925 patent solved this problem by allowing quicker access through the IDE (by putting the execution of the communicated instructions in the first device off-line – turning off the BUSY bit after the instructions were sent but before execution).  The IDE therefore only blocked communications between the computer and a storage device when communications were actually taking place between the computer and the other storage device. 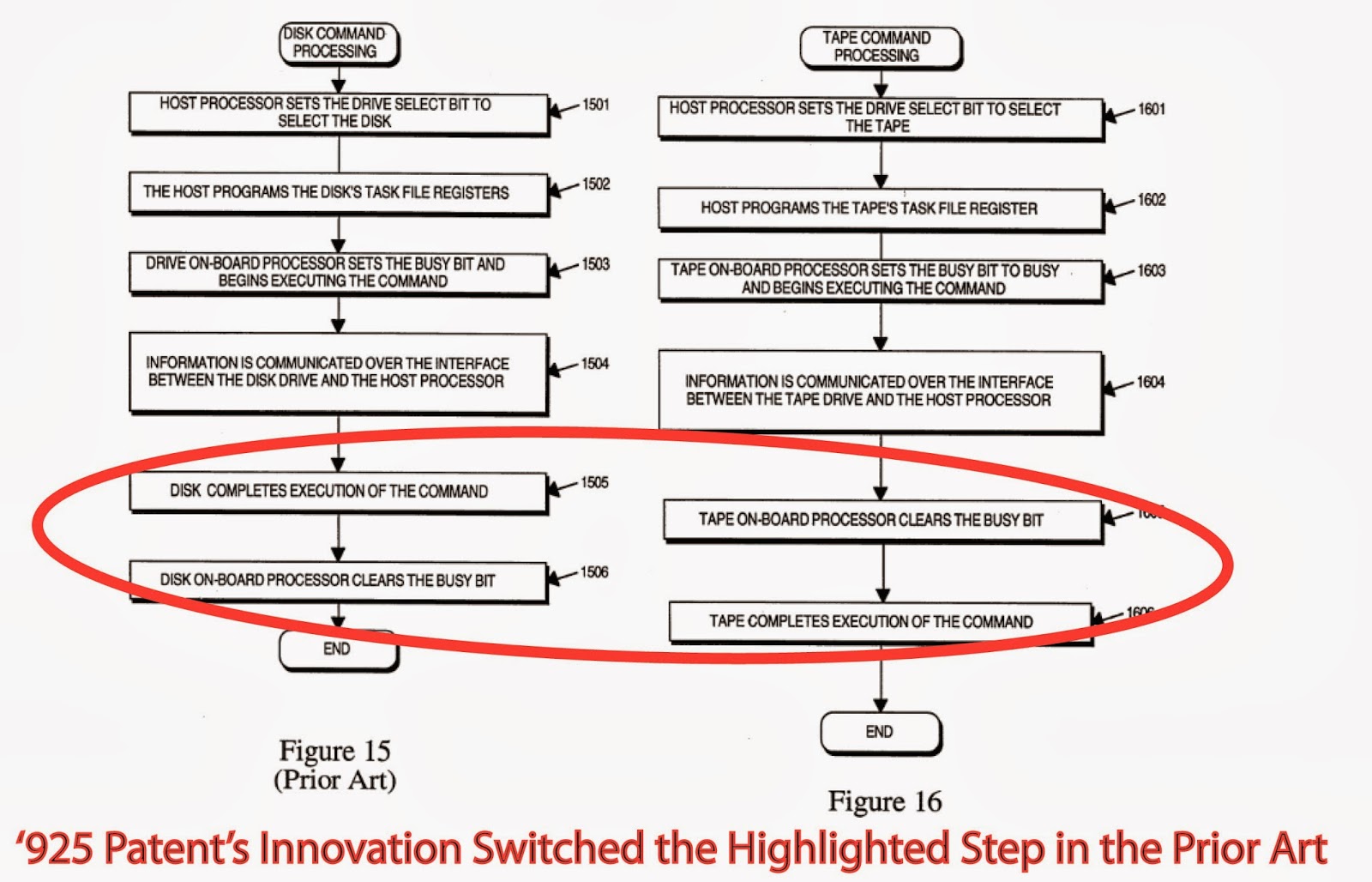 The claims of the ‘925 patent were drawn to cover the solution.  The patent was asserted against Toshiba and Samsung relating to their use of resetting the BUSY bit to communicate with CD and DVD drives using IDE as it evolved over the years.Below are Figures 15 and 16 from the patent showing the innovation to the prior art:

The claims in dispute were listed by the Court as:

With regard to “storage device” and “separate storage device,” Synchrome argued for ordinary meaning and Samsung and Tohsiba proposed that the terms be limited to a tape drive[1] and a floppy disk drive.[2]  In adopting Synchrome’s proposed construction, the Court noted that the specification does not compel the distinction proposed by Toshiba and Samsung.  The Court found that “a person of ordinary skill in the art would recognize that the term ‘storage device’ as used in the ‘925 patent could apply to more than a tape drive.”  The Court refused to restrict the claim to the preferred embodiment, also pointing to dependent claims identifying a tape drive under the claim differentiation doctrine.

The principle of claim differentiation also served Synchrome in the Court’s adoption of its position that storage devices not be required to both read and write data.  Again the preferred embodiment did not restrict a broader application of the claim terms.  This analysis led to the Court’s adoption of Synchrome’s position on the construction of  “storage medium.”  Similar analysis controlled the Court’s construction of the term “formatting circuit,” which was not limited to formatting for writing to tape drives.

In considering construction of the term “IDE Interface,” the Court noted that the patent specifications referred to the specific IDE Interface existing at the time of the invention and that is how a person of ordinary skill in the art would have understood the term at the time.  The Court noted:  “There have been a number of revisions to the IDE/ATA specification since the time the grandparent application of the ‘925 Patent was filed in November 1990.”   The Court followed the rationale of PC Connector Solutions LLC v. SmartDisk Corp., 406 F.3d 1359, 1363 (Fed. Cir. 2005) regarding “terms with ‘implicit time-dependence’ as imposing a limitation to ‘technologies existing at the time of the invention.’”  As further support of this approach, the Court noted:  “During the prosecution of the ‘925 Patent, the examiner noted that ‘the term ‘IDE’ is a trade name describing an industry standard which is revised from year to year’ and that ‘the examiner continues to understand the claimed IDE interface as being the IDE interface or interfaces that were known at the time of the applicant’s  invention.”  The construction of the term was not controlled by the inventor’s subjective intent but by “what one of ordinary skill in the art at the time of the invention would have understood the term to mean.”  Markman v. Westview Instruments, Inc., 52 F.3d 967, 986 (Fed. Cir. 986) aff’d, 517 U.S. 370 (1996).

The Court’s Order presents two sides of the same coin – one result coming up “heads” and the other “tails.”  Patent claims only cover technologies disclosed in the specifications and reasonably contemplated by the inventor as capable of being perceived at the time by one of ordinary skill in the art.  Describing standard products and existing standards as components of the invention and including those components by reference in the claims will restrict those claims to the technology of the date of the invention as understood by one of ordinary skill in the art.  Would the result have been different if the specification had contemplated a developing IDE standard continuing to employ the BUSY bit communication functionality, or if the term IDE was left out and a more general reference to the BUSY bit concept had been utilized instead?  Is hindsight 20/20?

[1] The full term proposed by defendants was “[a] tape drive for reading and writing data.”

[2] The term defendants proposed was “[a] disk drive for reading and writing data.”