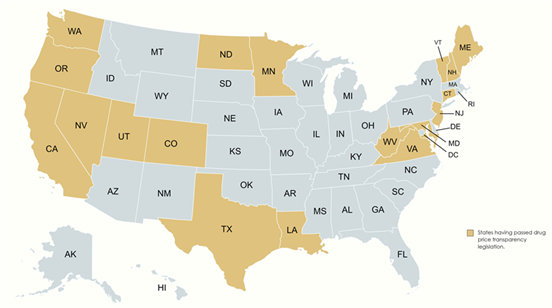 “Drug pricing information,” otherwise known as “transparency,” is a broad concept; consequently, the scope of the various state requirements for disclosure varies markedly by state. States generally use one of three parameters to determine which drugs trigger reporting requirements.

Once a drug satisfies one or more of the above reporting conditions, manufacturers must provide a range of information. Some states have relatively minimal disclosures while others have more rigorous disclosure regimes. For instance, some states require reporting of the WAC, the names of the drug and the manufacturer, whether the drug is brand or generic, and other basic information. Meanwhile, Oregon lists nineteen distinct disclosures ranging from basic information about the drug and the manufacturer to cost determination methodology and financial data if a drug’s WAC is $100 or more and the net yearly WAC increases by 10 percent or more. States in enacting laws have significant latitude to fashion their reporting requirements. Therefore, states may choose from an infinite number of disclosures, which states can tailor to specific reporting conditions.

Reporting methods and technological infrastructure vary among states as well. Most states have implemented highly sophisticated online portals requiring manufacturers to register a user account, conform reportable information to specific file formats, and submit drug pricing information through the portal within a specific timeframe upon the occurrence of certain conditions. Some states make reporting templates available online and attachable to an email. Finally, some states have not fully implemented their required file exchange protocols due to either lack of funding or administrative delays caused by the COVID-19 public health emergency.

To Whom Manufacturers Should Disclose

The state administrative authority overseeing drug price reporting requirements varies by state. Some states have conferred authority to subdivisions within a state’s general department of health tasked with monitoring prescription drugs, health data, or health strategy, while others have delegated oversight authority to a board of pharmacy, a department of insurance, or an attorney general’s office. Colorado, however, requires disclosures directly to Colorado prescribers, rather than to a state agency. In conformity with confidentiality requirements, most state agencies publish the WAC metrics and other basic information received from manufacturers.

Congress may also be taking steps to require transparency. On April 22, 2021, House Energy and Commerce Committee Chairman Frank Pallone (D-NJ) re-introduced the “Elijah E. Cummings Lower Drug Costs Now Act” (H.R. 3), which was originally introduced in 2019 but stalled in the Senate. The bill, currently undergoing committee markup, is significant in several respects. First, it may upend the historic ban on the federal government directly negotiating drug prices with manufacturers. Second, under Section 401, the bill may require manufacturers to notify and report certain information about both the prescription drug and the manufacturer to the U.S. Department of Health and Human Services (HHS). Notable reporting conditions and associated timing provisions, required disclosures, and potential penalties are outlined below.

The landscape of prescription drug price transparency is complex and evolving. The independent criteria developed by 18 states and the potential enactment of a federal version with distinct obligations could pose logistical and compliance challenges for manufacturers seeking to adhere to the requirements of multiple jurisdictions.

Chia-Feng Lu guides life sciences and emerging technology companies, as well as industry associations, through the regulatory and transactional law surrounding life sciences and emerging technologies. He represents companies in strategic regulatory and legislative processes before various government agencies, to guide and develop new legislation and policy, to frame effective approaches to working with the various agencies on compliance and investigation issues, and to help clients develop strategic plans to obtain the regulator’s favorable view on their innovative products or ideas. This...