When Does the Relocation of a Public Hearing on a Development Approval Require Additional Notice?

As Justice Brandeis once said, "Publicity is justly commended as a remedy for social and industrial diseases. Sunlight is said to be the best of disinfectants; electric light the most efficient policeman."  Professor Frayda Bluestein of the UNC School of Government gives good analyses here, here and here of North Carolina legal expectations for public meetings and public hearings in the local government context.

Does the relocation of a noticed public hearing to an entirely different, non-government and non-noticed location violate applicable open meetings laws?  It was contended as much in New York, though an appellate court would not bite on the complainant's argument.

In Frigault v. Town of Richfield Planning Board (May 22, 2013), available here, the New York appellate court determined that moving a public meeting regarding a special use permit due to attendance overflow and limited space in the "noticed" room did not violate New York's Open Meetings Law. 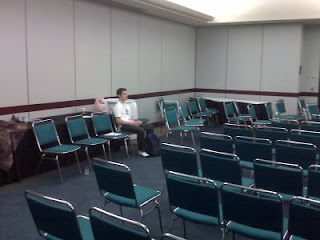 We will ignore the other holdings and analyses of the decision -- suffice it to say, the appellate court ultimately annulled the special use permit -- and limit this discussion to the relevant facts to and review of the New York Open Meetings law.

Monticello Hills Wind, LLC applied to the Town of Richfield Planning Board for a special use permit for a construction project.  The Planning Board held a public hearing for the permit application in September 2011.  In November 2011, the Planning Board reviewed the application at a public meeting, which was noticed for a specific location.  However, so many people showed up to the meeting that the room reached its maximum capacity and the meeting was relocated to a local church.  The Board notified those who were present of the relocation as well as placed a note on the Town Hall door for any latecomers to the meeting.

The appellate court reversed, holding that the Board did not violate the New York Open Meetings Law by moving the November 2011 meeting meeting for capacity reasons.  The appellate court cited to the State law requiring that “all reasonable efforts” be made to accommodate and ensure public access to public meetings and hearings.  Once the Board realized that the Town Hall was over capacity, the Board made immediate accommodative efforts by relocating the meeting and notifying the latecomers as well as it possibly could have done.  The appellate court determined that these accommodations were reasonable under the circumstances and the Board did not violate the Open Meetings Law.

While this instance passed muster, local governments and developers alike will care about the validity of meetings on specific projects.  Meeting notice is always a point of careful concern, but it should be a point of ongoing careful concern.