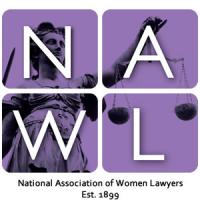 The National Association of Women Lawyers (“NAWL”) is 114 years old this year. It is not only the oldest women’s bar association, it is also the only national bar association for women, dedicated to advancing women lawyers and the interests and rights of women under the law. NAWL truly is the voice of women in the law™.

In the last few years, NAWL has seen women lawyers working within in-house corporate legal departments begin to make great strides in their advancement into leadership positions and break through into the higher echelons of the General Counsel’s Office. In 2006, NAWL challenged corporations and law firms to double their number of women general counsel and equity partners from 15% to 30% by 2015. Recent statistics indicate that the “NAWL Challenge” for corporate legal departments in the Fortune 500 corporations already has been met. Women today comprise 30% of General Counsels, when only a few years ago they comprised only 15% of the General Counsels in the same companies. This achievement is in sharp contrast to the fate of women lawyers in the 200 largest U.S. law firms (“AmLaw 200”), where women have stagnated at 17% of equity partners since NAWL’s annual survey of advancement of women lawyers within the AmLaw 200 began.

How have women in corporate legal departments been able to achieve their climb up the corporate ladder -- at least compared to the glacial movement of women in large private law firms? Certainly the advancement is due, in part, to the women who have come before them, the trailblazers who always reached back and brought other women along with them, who always were available for consultation and advice and shared their insights and perspectives. It is also due to top-down management and implementation of diversity and inclusion objectives instilled in the corporations by their business leaders and boards of directors. And, I am proud to say that in part the achievements of corporate in-house counsel are due to programs, like the General Counsel Institute (“GCI”), that help to define best practices for women in-house lawyers to achieve their personal and professional aspirations and facilitate their advancement.

This year’s 8th Annual GCI promises to make its own significant contribution to that effort. SUCCESS STRATEGIES—Defining Success and Adding Value as In-House Counsel in the 21st Century will be held at the Intercontinental Times Square in New York City on November 8 and 9, 2012. Highlighting the event will be the plenary sessions, including:

•“Success”—Going Beyond Webster’s Definition, an interactive session focused
on personal definitions of success;

•The Road to Chief Legal Officer, presented by a panel of successful General
Counsels;

•The Myth of the Ideal Worker: Does Doing the Right Thing Really Help Women
Get Ahead?, a panel discussion of practical advice based on research conducted
by Catalyst; and

•Speak Your Truth, Colette Carlson’s presentation on the art of effective self-
promotion).

The timeliness of the educational programs, the wisdom imparted by the keynote speakers and the unparalleled networking opportunities will offer significant guidance and assistance to in-house counsel as they strive to achieve continued success for themselves and their companies. For more information on GCI8, go to www.nawl.org.

Beth L. Kaufman is a senior partner and head of litigation at Schoeman Updike Kaufman & Stern LLP, an AV® Preeminent™ Law Firm based in New York and one of the largest women-owned law firms in the United States. Ms. Kaufman concentrates her practice in complex litigation, including commercial matters, employment defense, product liability and toxic tort matters. Ms. Kaufman is a past President of NAWL (2012-2013), recently concluded a four year term, from 2010 to 2014, as Secretary of the ABA Section of Litigation and, from 2009-2012, served as the...