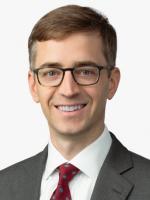 Brian H. Jenn focuses his practice on US and international tax matters for US and foreign multinationals and other clients. As former Deputy International Tax Counsel (DITC) for the US Department of Treasury, Brian has extensive experience and insight on the Tax Cuts and Jobs Act (TCJA), having been deeply involved in the process of issuing proposed and final regulations and other guidance implementing the TCJA. Brian also has significant insights on taxation of the digital economy, transfer pricing and US taxation of foreign currencies.

Prior to joining McDermott, Brian spent several years at the US Department of Treasury where he was an attorney advisor, and most recently DITC. While at Treasury, he served as co-chair of the Organisation for Economic Co-operation and Development’s (OECD) Task Force on Digital Economy and as US delegate to the Committee on Fiscal Affairs. In this capacity, Brian led Treasury’s engagement at the OECD on digital tax issues, playing a central role in discussing tax challenges associated with the digitalization of the economy, as well as the development of new international norms for allocating tax rights among countries.

In addition, Brian was one of the primary drafters of a recently issued detailed set of regulations governing US taxation of transactions involving foreign currencies.

Prior to law school, Brian served as a staff economist to the White House Council of Economic Advisors where he assisted the chairman and members of the council in advising the president on tax policy and other public finance issues. In addition, he served as senior economist to the Joint Economic Committee of Congress where he advised the chair regarding tax policy, including issues related to the economic implications of potential international tax reforms.