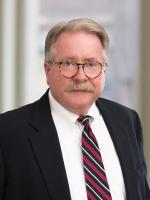 Dean Barnhard represents major businesses, including a Fortune 50 chemical and genetically engineered seed manufacturer, in the defense of toxic tort and product liability claims. With a substantial body of published decisions over the course of his career, Dean offers the tactical dispute resolution and trial experience, creativity and resourcefulness needed to resolve complex, high-stakes litigation.

Dean has defended product-related mass tort and environmental contamination cases in Hawaii; mass tort, putative class action and RICO claims in New York; and cases of like kind, including individual wrongful death, personal injury, and crop loss cases across the country. He remains personally dedicated to making each client’s litigation more efficient and less costly by creating an actionable plan that concentrates on the solution, and not the fight. Dean possesses a seemingly innate ability to make discovery productive and beneficial to his client.

Dean believes that every dollar spent on litigation is money that cannot be invested back into his client’s business or the community. As a result, his goal is to find positive resolution as quickly as possible. He is particularly skilled in understanding what plaintiffs need in order to prove their cases, and then negotiating the right result based on those requirements. By isolating dispositive themes at the beginning of a case, Dean is consistently able to design the best possible approach to problem-solving.

Over more than three decades of continuous practice, Dean’s demonstrated artistry and proven ability to develop an optimized strategy has allowed him to defend, settle and fend off even the most challenging cases. Because Dean began his career in stage performance and music, he knows how to present his client’s position in a manner that is persuasive and effectual. Dean’s erudition, coupled with his approachable and down-to-earth personality, make him personable and dynamic both in and out of court.

Dean is involved in the national opioid litigation with over 550 lawsuits brought by counties, cities and towns from across the country seeking recovery for their costs associated in dealing with the opioid abuse epidemic. Dean also tried the first televised federal court trial in an action in New York involving James Dean's rights of publicity and helped successfully defend the James Dean Foundation Trust and others in a $90 million suit in Los Angeles brought by Warner Bros. over the merchandising rights to James Dean's persona, securing an award of defense costs, including attorneys' fees, in excess of $1.6 million.

As former outside counsel to CMG Worldwide, an international sports and entertainment licensing and business agency, Dean has represented the families and estates of numerous celebrities such as James Dean, Marilyn Monroe, Humphrey Bogart and Babe Ruth. He has also represented legendary NASCAR champion, Bill Elliott. Dean has successfully pursued infringements of celebrity rights nationally and internationally, including infringements in England, Japan, Spain and Australia.

He is a frequent speaker on issues relating to effective discovery techniques and motion practice in the defense of chemical manufacturers. Before the law, Dean was a professional tuba player and taught at the University of Miami in Coral Gables, Florida.