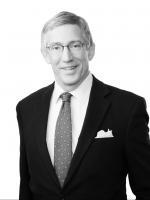 Edward has represented assureds, underwriters, and other industry participants in a broad range of disputes involving hull, cargo, builder's risk, P&I, MEL, CGL, control of well, and excess and umbrella policies. He has given opinions regarding coverage, prepared reservations of rights, and advised lenders with respect to the insurance aspects of maritime finance transactions. From 1990 to 1994, Edward served as chairman of the US Maritime Law Association sub-committee on P&I insurance and, from 1994 to 1998, as chairman of the organization’s standing committee on marine insurance and general average.

Edward is an experienced maritime attorney who has represented numerous vessel, charter, and cargo interests. He has obtained judgments for carriers on the basis of error in navigation, customary freight unit, and lack of a recoverable property interest, as well as for charter and cargo interests recovering for the loss of packaged and bulk shipments.

He has litigated collision, removal of wreck, pollution, products liability, and other vessel-related cases in inland and blue-water settings; prosecuted complaints for exoneration from limitation of liability and obtained judgments of no fault in collision cases; and has arrested vessels in the assertion of various maritime liens, including those arising from charter parties.

Edward has defended numerous personal injury cases involving jury and judge trials, including claims that have arisen in inland waters and ocean trades and include limitations on the rights of foreign seamen. Such matters have involved a variety of injuries, including toxic torts, as well as issues of contract and indemnity and the application of the Louisiana and Texas anti-indemnity statutes.

In non-marine insurance, Edward has represented insureds and underwriters with respect to property, general liability excess, pollution, fidelity bond, and title coverage questions. He also defends insureds under general and other liability policies.

In the energy field, Edward has prosecuted and defended control of well and loss/delayed production claims. He also has defended personal injury claims arising on offshore and inland rigs, including fire and explosion, defended claims involving damage to production equipment and underground pipelines, and obtained a substantial recovery in the capsize of a drill barge.

In bankruptcy court, he has represented claimants and defended various adversary proceedings, including claims for preference, avoidance, and fraudulent transfer.