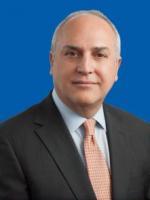 Ethan has long represented clients in significant electronic, chemical, and mechanical patent cases, including a case in which he obtained the first-ever preliminary injunction on a design patent on behalf of Oscar Mayer, defending its Lunchables product against Sara Lee. He also has represented Miller and Molson, who were accused of violating Labatt’s patent on the process for making ice beer. He represented Spansion, a flash memory fabricator in one of the largest International Trade Commission cases in history, involving a two-week trial on two patents — one on the construction of a flash chip and the other on the programming of a flash chip.

Ethan has also tried numerous trademark, trade dress, and dilution lawsuits. These include representing Pepperidge Farm in a landmark case that resulted in a preliminary injunction based on Pepperidge Farm’s rights to the shape of its Goldfish cracker. This case was among the first to issue a preliminary injunction based solely on a dilution claim.

In other trademark and trade dress cases, he defended Lotus’ mark “Notes” against an attack by Borland; Kraft’s trade dress for its Singles product against infringement by Borden; and Kraft’s trade dress and trademark for its Philadelphia Cream Cheese product from infringement by Bongrain. He also defended Cosmair (L’Oreal) and Ralph Lauren in an action brought by Calvin Klein to enjoin their new fragrance, Ralph Lauren Romance.

In false advertising cases, Ethan represented Kraft’s Jell-O gelatin and stopped Del Monte from calling its product “Gelatin Snacks.” The snacks were actually made of carrageenan, which is commonly described as gelatin though it fails to meet the technical definition. In addition to many court actions involving false advertising, he has brought and defended cases before the National Advertising Division of the Better Business Bureau and its Canadian and German equivalents.

In copyright cases, he represented Joe Simon, a co-author of the comic character Captain America, against Marvel Comics and won a landmark Second Circuit case holding that Mr. Simon could sue to recover his copyright from Marvel. In another case, his client, Colgate, was accused of copying Procter & Gamble’s advertising for Crest toothpaste. The respective ads were used by both companies in many countries around the world. Ethan argued the case before the National Copyright Administration in Beijing, and then tried to a verdict for Colgate, which was affirmed by the Second Circuit.

Articles in the National Law Review database by Ethan Horwitz