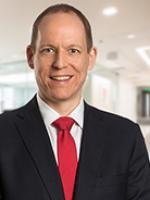 Marc Vander Tuig focuses on high-stakes patent litigation. He has helped his clients win complex patent cases in district courts throughout the United States and at the U.S. Court of Appeals for the Federal Circuit. Marc also has extensive experience handling contested cases at the Patent Trial and Appeal Board (PTAB) at the U.S. Patent and Trademark Office, including inter partes review, covered business method review and interference proceedings.

Marc has litigated many other types of intellectual property and commercial disputes in federal court. These cases include trademark, trade dress, trade secrets and antitrust cases.

Marc assists clients with a variety of other intellectual property matters, including patent counseling and opinions, due diligence and licensing. His experience spans a wide range of industries, including semiconductors, pharmaceuticals, telecommunications, chemicals, electronics, motors and software.

Won a preliminary injunction for a large chemical company against its competitor in a patent case after beating an inter partes review (IPR) petition challenging the company’s patent.

Defeated an IPR petition filed by a large European competitor against a steel manufacturer, including a successful appeal to the Federal Circuit.

Won a favorable settlement in a trademark case for a large, privately held company.

Won a complete defense victory for a Midwest financial institution in a patent lawsuit brought by a large patent-assertion firm by defeating multiple asserted patents in IPR proceedings and successfully defending these victories at the Federal Circuit.

Defeated all patent claims after early summary judgment for an electric motor manufacturer in a lawsuit brought against it by a direct competitor asserting design patent, utility patent, and trade secret claims.

Won a favorable settlement in a trade secret case for a Midwest manufacturer brought against the company’s former employee that went to work for a competitor.

Won a complete defense victory for a large financial institution in a patent lawsuit brought by a patent-assertion entity that had previously successfully enforced the asserted patent against numerous parties.

Won a high seven-figure settlement for a U.S. manufacturer of construction products in a patent case against a large European competitor.

Won a jury trial for a U.S. manufacturer in the semiconductor industry in a patent case against a primary competitor involving competing patent infringement claims.

Won a high seven-figure settlement and ongoing royalty for large chemical manufacturer in a patent case brought against the company’s direct competitor.

Won a complete defense victory for U.S. manufacturer in an antitrust case brought by a Japanese competitor seeking nine-figure damages.

Won a complete defense victory for a utility company in a patent lawsuit brought by a patent-assertion entity asserting 16 patents relating to telecommunications.