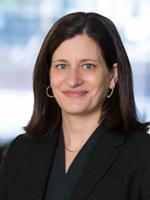 Margaret Daum advises clients facing congressional and related investigations, including the coordination of media and public policy, and implementation of strategic defenses.

As the leader of the firm’s Congressional Investigations team, Margaret represents companies and individuals under investigation by the US House of Representatives, US Senate, State Attorneys General, and Department of Justice. She has prepared many current and former corporate executives and government officials for interviews, depositions and hearings before congressional committees.

During more than a decade on Capitol Hill, Margaret led or played a major role in investigations in both the Senate and House of Representatives.

As the Democratic Staff Director at the US Senate Committee on Homeland Security and Government Affairs and its powerful Permanent Subcommittee on Investigations, Margaret led a wide range of oversight and investigations examining possible criminal activity, fraud, waste, abuse or mismanagement, including investigations into the sales and marketing practices of opioid manufacturers, the cost of prescription drugs, online sex trafficking and Backpage.com, and customer service in the cable and satellite television industry.

Previously, Margaret served as the Committee on Homeland Security and Government Affairs Staff Director for the Subcommittee on Financial & Contracting Oversight and Staff Director for the Subcommittee on Contracting Oversight, where she directed investigations into sexual assault at colleges and universities, aggressive sales and marketing tactics in the medical equipment industry, wartime contracting practices in Iraq and Afghanistan, and mismanaged and mismarked graves at Arlington National Cemetery.

Prior to serving in the Senate, Margaret served as Counsel for the US House of Representatives Committee on Oversight and Government Reform under Chairman Henry Waxman, where she conducted investigations into the federal government and private sector.