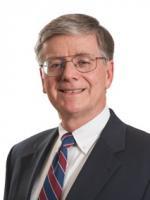 Mike Apfeld, a shareholder and a member of the firm’s Litigation Practice Group in Milwaukee, devotes the majority of his practice to civil appeals and complex motion practice. He has appeared repeatedly before the Wisconsin Supreme Court, all four districts of the Wisconsin Court of Appeals, the United States Court of Appeals for the Seventh Circuit, and the state and federal trial courts of Wisconsin. He also has appeared in the United States Courts of Appeals for the Tenth and Federal Circuits, the Illinois Appellate Court, the Circuit Court of Cook County, as well as various United States District Courts and administrative agencies.

Mike also is a long-standing co-chairman of the firm's ethics & conflict committee and in that capacity advises members of the firm, corporate legal departments, and other law firms on questions of legal ethics.

Mike is one of the co-authors of Apfeld, et al., Contract Law in Wisconsin (Wis. Bar 2d ed. 2002), and has written and spoken on a number of topics, including appellate practice, legal ethics, contract law issues, hostile takeovers, and products liability. From time to time, Mike has served as an adjunct professor at Marquette University Law School.

Articles in the National Law Review database by Michael B. Apfeld