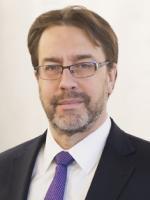 Paul O’Hop is a partner in the Washington DC office, where he has represented government agencies, large international companies and banks in transactions around the world in the development and financing of major infrastructure transactions in the energy, transportation and telecommunications sectors. Paul also assists large international corporations in a variety of industries in connection with structuring and managing their overseas holdings, and has substantial experience in the creation of international joint ventures, including joint ventures between government and private sector entities (public-private partnerships).

With more than 25 years of experience in the energy sector, Paul has represented large US-based energy companies on power generation, pipeline and production projects in the US and Latin America, including Mexico, Brazil, Argentina, Bolivia, Costa Rica, Peru and Venezuela. He has also been lead counsel in connection with several “first ever” transactions involving the private sector and government-owned energy companies in Latin America.

Paul also works extensively in the renewable energy industry. For example, in the solar industry, he has been involved in the development of some of the world’s largest solar projects, including the negotiation of solar power purchase agreements (PPAs) with the largest utilities in the US. He has also represented some of the largest US solar companies in a wide range of activities, including new project development and new supply procurement. Paul is also experienced in all aspects of energy project development, including joint ventures, PPAs, EPC contracts and O&M contracts, etc. His experience also includes working on the registration of credits under the Clean Development Mechanism (CDM) of the United Nations Framework Convention for Climate Change and the Kyoto Protocol.

In the transportation sector, he has acted as legal adviser to governments in Africa and Central Europe on the commercialization of and private sector participation in transportation infrastructure, including port systems and airports.

He has also been an adjunct professor of international law at The George Washington University. Paul has lived in Spanish-speaking countries on two occasions and has practiced law in the Netherlands and Belgium as an exchange lawyer.

Articles in the National Law Review database by Paul A. O'Hop