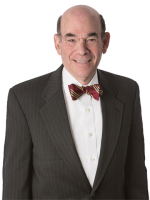 As the former general counsel of the U.S. Department of Health and Human Services (HHS), Bob Charrow brings to bear unparalleled experience in health care law. In January 2018, Bob was sworn in as general counsel of HHS, where he led an office of more than 600 lawyers and oversaw the chief counsel for the various agencies within the department, including the Food and Drug Administration, the Centers for Medicare & Medicaid Services, and the various Public Health Service agencies such as the National Institutes of Health and the Centers for Disease Control and Prevention. Bob serves as senior chairman of Greenberg Traurig’s Health Care & FDA Practice.

While at HHS, Bob helped to lead the U.S. government’s response to the coronavirus pandemic. Bob was at the epicenter of the legal issues triggered by the unprecedented global health crisis. He also actively participated in formulating department policy with respect to Medicare reimbursement, fraud and abuse, the Affordable Care Act, the PREP Act, drug and device approvals, drug pricing, including 340B issues, tort liability, and technology transfer.

Bob focuses his practice on research, biotechnology and health care issues. He represents health care providers, insurers, pharmaceutical companies, universities, research institutes and other entities with respect to regulatory and litigation matters arising under the Federal Food, Drug, and Cosmetic Act, Public Health Service Act, including the PREP Act, Medicare, Medicaid and Affordable Care Act, and fraud and abuse issues that may arise under the False Claims Act and other federal laws.

Bob previously served as a board member of Operation Warp Speed, a member of the senior staff at the AIDS Coordinating Council, the Attorney General’s Task Force on Tort Reform, and the Secretary’s Task Force on Medical Liability, and was chairman of the Task Force on Scientific Misconduct. He served as deputy chief counsel to Reagan-Bush ‘84, the president’s authorized campaign committee, and also taught as an associate professor of law at University of Cincinnati College of Law.

Bob has written extensively in the area of science and the law, and in particular on the effects of the legal system on scientific research, product development and health.