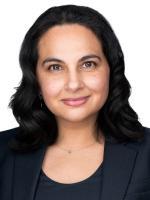 Sabita J. Soneji is a Partner in Tycko & Zavareei’s Oakland office.  She focuses her practice on consumer protection class actions and whistleblower litigation.  Ms. Soneji has extensive experience in litigation and legal policy at both the federal and state level and a passion for fighting consumer fraud.

Ms. Soneji began that work during her time with the United States Department of Justice, as Senior Counsel to the Assistant Attorney General. In that role, she oversaw civil and criminal prosecution of various forms of financial fraud that arose in the wake of the 2008 recession.  For that work, Ms. Soneji partnered with other federal agencies, state attorneys’ general, and consumer advocacy groups.  Beyond that affirmative work, Ms. Soneji worked to defend various federal programs, including the Affordable Care Act in nationwide litigation.

Ms. Soneji has extensive civil litigation experience from her four years with international law firm Baker Botts LLP, her work as an Assistant United States Attorney in the Northern District of California, and her most recent work as Deputy County Counsel for Santa Clara County, handling civil litigation on behalf of the County including regulatory, civil rights, and employment matters.  She has successfully argued motions and conducted trials in both state and federal court and negotiated settlements in complex multi-party disputes.

Early in her career, Ms. Soneji clerked for the Honorable Gladys Kessler on the United States District Court for the District of Columbia for three years, during which she assisted the judge in overseeing the largest civil case in American history, United States v. Phillip Morris, et al., a civil RICO case brought against major tobacco manufacturers for fraud in the marketing, sale, and design of cigarettes.  The opinion in that case – which is over 1600 pages — paved the way for Congress to authorize FDA regulation of cigarettes.

In her spare time, Ms. Soneji teaches for National Institute for Trial Advocacy (NITA), coaches a moot court team at Berkeley Law School, and volunteers at a local food bank.