Summary: Recent court trends suggest that preemption under the Employee Retirement Income Security Act (ERISA) may not apply to certain state laws that regulate pharmacy benefit managers (PBMs), including state laws governing Maximum Allowable Cost (MAC), which is essentially the process used by a PBM to determine in-network pharmacy reimbursement rates for generic drugs and multi-source brands. If this trend continues, this may mean that ERISA plan administrators and PBMs will need to pay very close attention to state MAC laws, as well as certain other state laws regulating PBMs. See our interactive map below that summarizes which states currently have a MAC law in place. See further details in our legal analysis below.

In December 2020, the Supreme Court in Rutledge v. Pharmaceutical Care Management Assn. (Rutledge)unanimously reversed a decision by the Eighth Circuit Court of Appeals holding that the Arkansas MAC law was preempted by ERISA. More recently, the Court ordered the Eighth Circuit to reconsider its holding in Pharmaceutical Care Management Assn. v. Tufte, that a broad-based North Dakota PBM law that did not include a MAC provision was preempted by ERISA, based on its holding in Rutledge.

The Eighth Circuit’s opinion in Rutledge and its earlier opinion in Pharmaceutical Care Management Assn. v. Gerhart, 852 F.3d 722 (8th Cir. 2017), regarding an Iowa MAC law had raised issues both about the viability of the more than thirty similar state MAC laws, as well as the continued viability of the more than 45 state laws that regulate other aspects of the business relationship between PBMs and the pharmacies participating in their retail pharmacy networks.

Both opinions on the surface seemed in conflict with the Court’s holding in New York State Conference of Blue Cross Blue Shield Plans v. Travelers Ins. Co., 514 U.S. 645 (1995), that state laws that merely increased the cost paid by ERISA plans for medical services without affecting plan design decisions or otherwise precluding uniform national plan administration of ERISA plans were not preempted. However, the Eighth Circuit analysis relied on the Court’s more recent decision in Gobeille v. Liberty Mut. Ins. Co., 577 U.S. 312 (2016), which many commentators suggested raised questions about the continued viability of the Court’s analysis in Travelers.

In Gobeille, which was decided while PCMA’s challenge to the MAC law in Iowa was working its way through the courts, the Court found Vermont’s all-claims database law to be preempted based on the risk that conflicting similar laws in other states would make uniform national plan administration impossible. The Eighth Circuit similarly held in both Gerhart and Rutledge that MAC laws were preempted because variations between such laws in different states similarly impermissibly interfered with uniform national plan administration.

The opinion in Rutledge, which relied heavily on Travelers and clarified the basis for the holding in Gobeille, has added more clarity with respect to when state laws regulating the relationship between PBMs and retail pharmacies in the PBM’s networks raise ERISA preemption concerns. First, the opinion clarifies that the reason that the all-payer claims database law at issue in Gobeille was found to be preempted was because the law regulated an area that was a central matter of plan administration under ERISA, namely recordkeeping, disclosing, and reporting of claims data, and that a majority of the Court in Gobeille was concerned about the impact that differences between such laws in multiple states could have on the ability of plans to be administered on a uniform national basis.

As a result of the emerging case law, going forward, we would expect courts to evaluate ERISA preemption claims with respect to broad-based PBM laws on a provision-by-provision basis and only invalidate those provisions that clearly and directly impact ERISA plans’ plan design choices (e.g., any willing provider laws) or other areas of plan administration, such as how claims are processed (e.g., prompt pay laws). Given these developments, state MAC laws will likely become more relevant for ERISA plan administrators and PBMs. The map below indicates which states currently have some sort of MAC law in place. 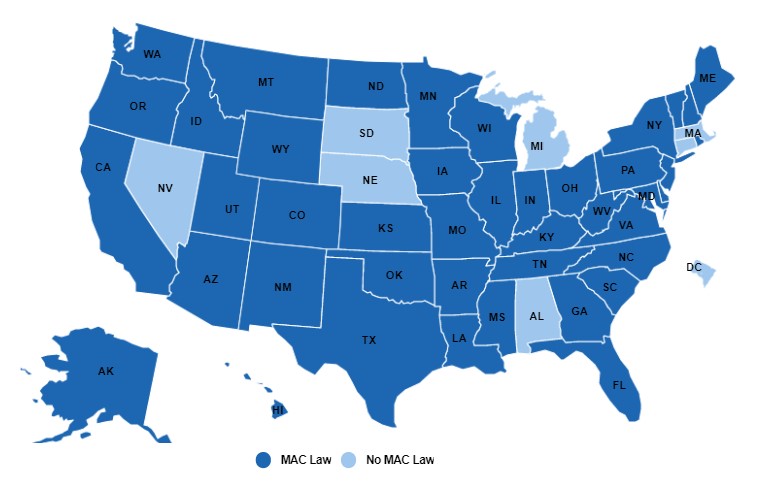 Nick Welle is an associate and business lawyer with Foley & Lardner LLP. His practice is focused on health and welfare plans. He also assists clients with qualified retirement plans, including defined benefit and defined contribution plans.

Michael H. Woolever is a partner and tax lawyer with Foley & Lardner LLP, where his practice focuses on executive compensation, ERISA Title I issues, ERISA class action litigation and other employee benefit and federal income tax matters. Mr. Woolever regularly represents both employers and senior executives in all forms of executive compensation and executive employment matters involving employment agreements, equity compensation plans and various other forms of compensation arrangements. He has written and spoken extensively on Code Section 409A and its impact on various forms of...

Marian E. Dodson is an associate with Foley Lardner LLP, where she represents health care providers, governmental entities, and other private and public sector employers who sponsor retirement plans and health plans. She drafts health plan documents and provides guidance on compliance with the Affordable Care Act, COBRA, and HIPAA. She also works with defined benefit and defined contribution retirement plans, and advises plan sponsors on compliance with ERISA and the Internal Revenue Code’s tax qualification rules.

Hannah Demsien is an associate with Foley & Lardner LLP and a member of the firm’s Business Law Practice.

Before attending law school, Hannah worked in Chicago as a legal assistant for an immigration law firm, helping corporate clients sponsor foreign workers for permanent residency. As a law student, Hannah served as a legal intern for several government offices in Wisconsin, focusing on insurance and employee benefits. Additionally, she was a summer associate in the firm’...