All You Need to Know About Qualified Opportunity Zones. For Now.

Interest in Qualified Opportunity Zones ("QOZs") has increased since October 29, 2018, when the Department of the Treasury and the Internal Revenue Service published the proposed rules relating to QOZs in the Federal Register.

Anticipation for the final rules has been thick since the Valentine's Day hearing on the rules. Nothing says love like tax rules. Given the complex nature of the program, and the lack of final rules, there is still a lot of uncertainty about how QOZs can be used. Based on that, I would imagine that if I were to have a conversation with a "friend" about QOZs, it would go something like this. I anticipate having additional conversations – with a "friend" – on related QOZ topics, and if there is anything you would like to see discussed, please let me know.

Author: Since this is our first time getting together in quite a while, I thought it would be useful to discuss a topic that is applicable in all 50 states and the rules of which, at present, are still being written. I'm talking about Qualified Opp...

Friend: QOZs, right? Little late to the party there, aren't you sport? I'm pretty sure I've read about 60 of these little summaries since the IRS and the Department of the Treasury released the proposed rules. You have anything fresh?

Author: Perhaps. The key thing you just said was "proposed rules." That means the final rules haven't been issued yet, and a lot of your summaries were based on information that may change, even though the proposed rules do state in various sections that people or entities "may rely on the proposed rules … before the date of applicability of this section, but only if the rules [are applied] in their entirety and in a consistent manner."

Friend: Let me guess: you're going to offer to publish a blackline of this article that will show all of the changes to the proposed rules made by the final rules. Man, you lawyers love your blacklines.

Author: That's not a terrible idea. Could be a quick way for taxpayers and investors to get up to speed on the final rules and the changes. Either way, anyone interested in forming a Qualified Opportunity Fund...

Friend: What in the world is that?

Author: We'll get to it below. As I was saying, if you're interested in forming a Qualified Opportunity Fund ("QOF"), or investing through one of these funds, you really should consult a tax advisor, CPA, and an attorney.

Friend: Wait. Are you talking about having to talk to all three of these people? At the same time? For one deal? I think I'd rather just pay full taxes.

Author: Up to you, but right now, I'd like to refresh the recollection...

Friend: You're not a litigator.

Author: ...of some of our readers about QOZs as the proposed rules are currently structured.

Friend: If you must. So, what are these things – what's their purpose? Most importantly, what's...

Author: ...in it for you? I thought that was where you were going. For this initial scintillating legal education piece, I'll divide up the topic so that the main facets of QOZs are easier to understand.

Friend: I'm starting to think I'll need to consult an attorney about all of this. You know any good ones? How does all of this work? 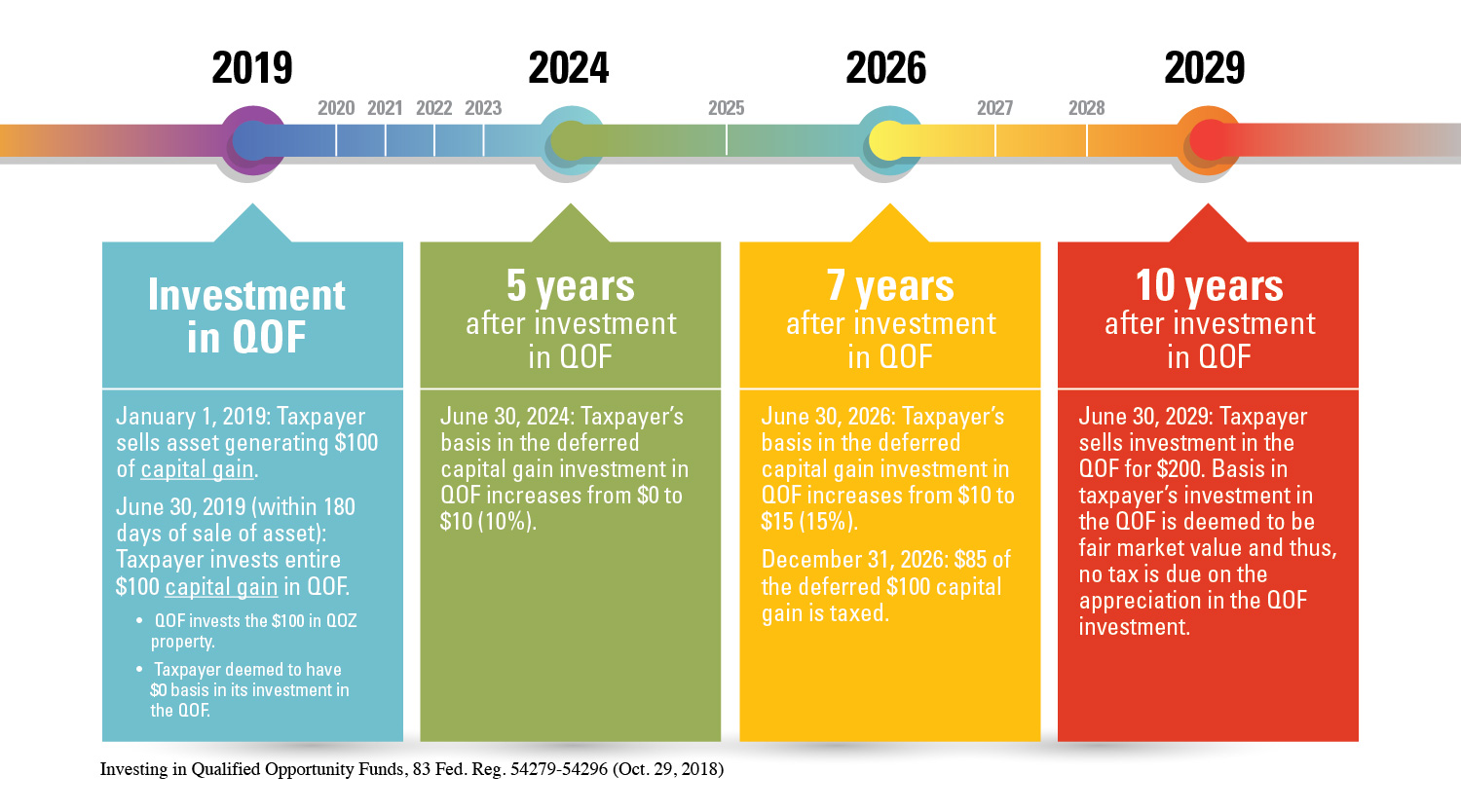 Friend: That diagram is helpful and well done – clearly you didn't make it. You said the deferral of the original capital gain is only good until December 31, 2026? That means someone has to sell an investment with capital gain and invest it into a QOF within 180 days this year to get the extra 5 percent step up in basis. Is that right?

Author: That is correct.

Friend: You don't think we could have used that information, say, last year?

Author: That's why we're going over it now, and I'm pretty sure it was in at least one of the 60 QOZ summaries you said you'd received.

Author: If I may continue, I should also note that an investor only has to roll his or her deferred capital gain into a QOF, not the original principal of the investment.

Now that we're through the tax fun, let's discuss what some of these different key terms mean.

Author: I'll press on. Here are some of the key terms:

Author: Maybe I got ahead of myself.

Friend: Please, make it stop. I'm starting to feel like Dark Helmet in "Spaceballs:" "My brains are going into my feet..."

Author: Well, we can't stop; we've got to slow down first. Back to QOZBs.

A QOZB is a trade or business in which

And since I know you're dying for clarification, the working capital safe harbor is dependent on three requirements:

Friend: You lost me after the golf course thing. That's a deal killer right there. I already have plans drawn up for a tanning and massage facility for racehorses.

Author: I'm going to ignore that. There's another way to explain how all of these terms work together, and that is in terms of ownership structure: direct and indirect. We'll assume a partnership for the purpose of this explanation 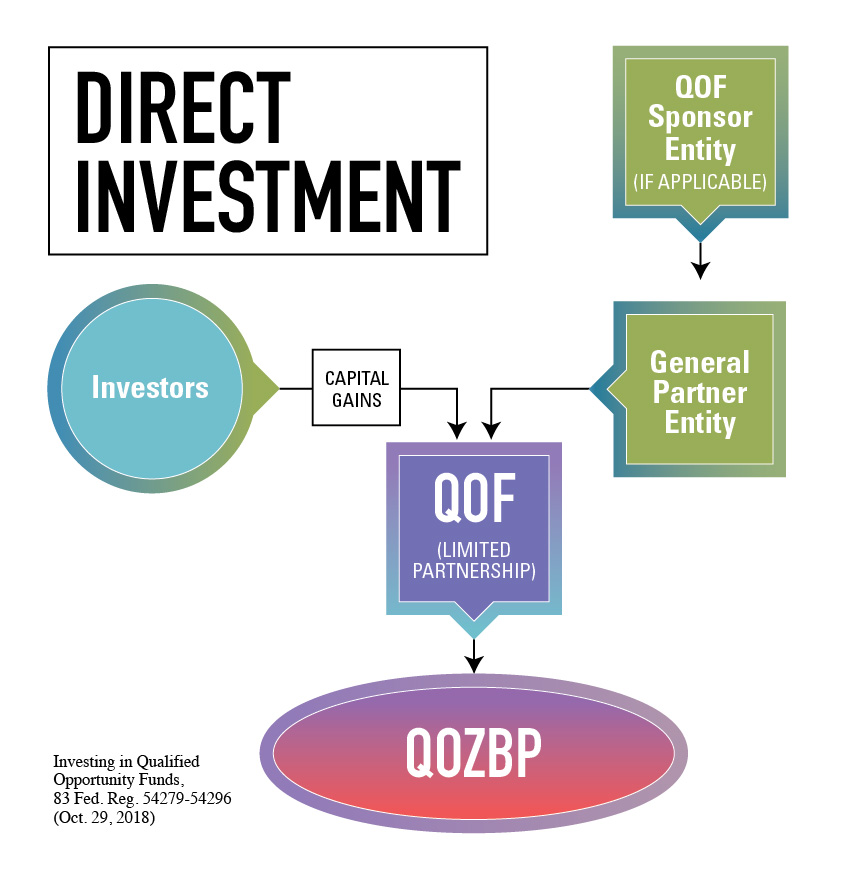 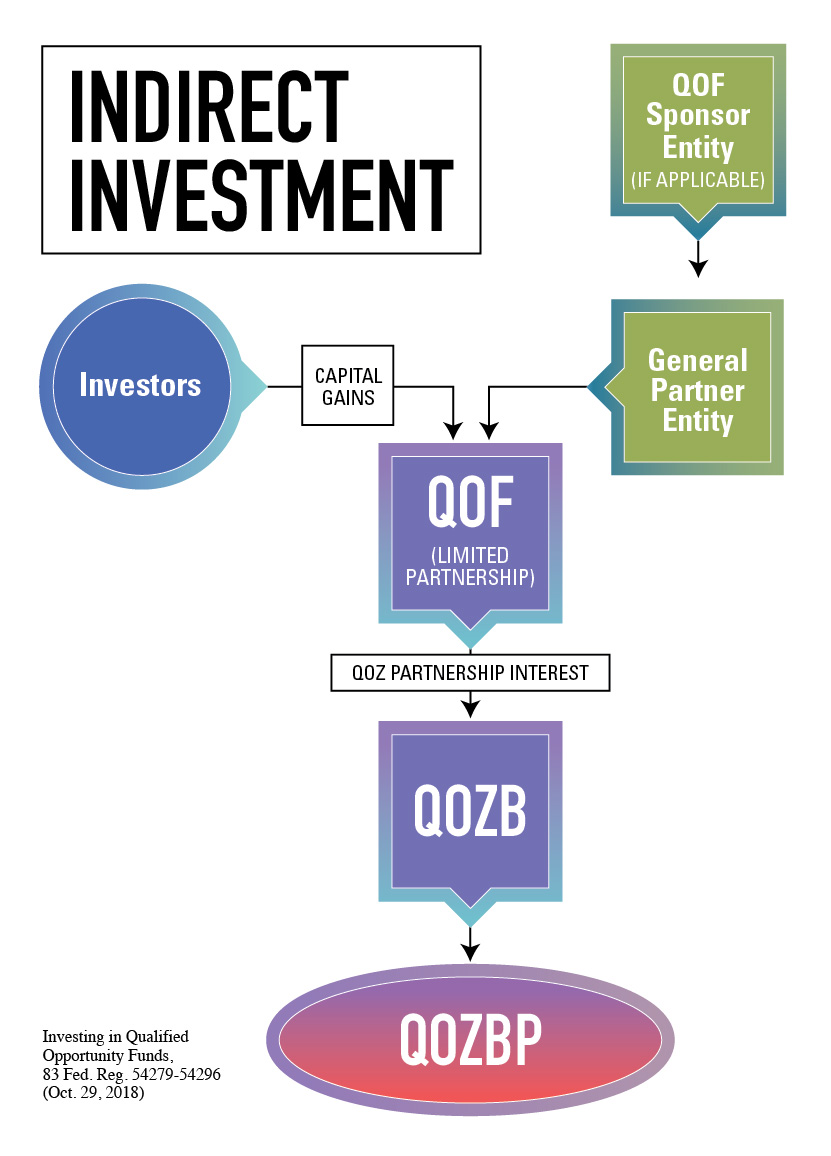 Friend: Perhaps something a bit stronger.

Friend: All of this sounds like there is a lot of complexity and a host of additional issues behind what you've already, perhaps futilely, tried to explain. What's the next phase of QOZs? Who can really benefit from these things? And do I have to have another of these conversations with you?

Author: I'll answer your last question first: almost certainly. We still need to see the final rules on QOZs, and once we do, we can (a) take a look at how QOZs are impacting or could impact North Carolina, (b) analyze what kinds of structures have begun to appear (and by "structure," I mean fee structure, of course), (c) see about comparing or combining QOZ tax benefits with other tax structures and programs, including 1031 exchanges, and (d) dig into the aspirational or theoretical economic and other impacts QOZs are supposed to have.

Friend: I asked if I had to have another conversation. That's four you just listed. Your math isn't so great. History major, right?

Author: And proud of it.

Anyway, to finish up here, there are a lot of different kinds of people or entities that could use or benefit from QOZs. Managers of existing funds looking for additional sources of capital or looking to diversify their fund offerings, family offices or high net worth individuals with substantial unrealized capital gains, entrepreneurs looking for different ways to start or expand businesses in QOZs, existing businesses looking to expand their operations or geographic footprint either within or into QOZs, individuals in the real estate industry that could use the new, tax-efficient sources of capital for ground-up development or renovation projects. I would think that once the final rules are promulgated...

Friend: You could have just said "released" or "published." You didn't have to use a fancy lawyer word.

Author: I'm beginning to like your idea of one more conversation a lot better than four.

Once the final rules are promulgated, I think we will begin to see an increase in the amount of QOFs being created or engaging in transactions and also what their targeted investments are and who or what entities are taking advantage of them. It seems that there is some hesitation to throw significant resources into QOFs without the final rules, despite the Department of the Treasury's and the IRS's assurance that taxpayers and entities can rely on the proposed rules.

Friend: I await your call with bated breath.

Attorneys in our Tax Practice Group regularly advise clients on local, state, federal, and international tax matters.  Such matters involve income, estate, gift, employment, excise, sales and use, property, and other taxes.  We are accustomed to achieving favorable outcomes in dealings with the U.S. Department of the Treasury, the Internal Revenue Service ("IRS"), the North Carolina Department of Revenue, and other State and local tax authorities.  Our services include both tax planning and dispute resolution.