In a case relating to compounds for the treatment of the Hepatitis C virus (HCV), the US Court of Appeals for the Federal Circuit upheld a district court’s grant of judgment as a matter of law (JMOL) for lack of enablement and reversed the court’s denial of JMOL for lack of written description, finding that practicing the full scope of the claims required excessive experimentation. Idenix Pharmaceuticals LLC v. Gilead Sciences, Inc., Case No. 18-1691 (Fed. Cir. Oct. 30, 2019) (Prost, J) (Newman, J, dissenting).

Idenix filed a patent infringement suit against Gilead alleging that imminent US Food and Drug Administration approval and launch of Gilead’s HCV treatment drug sofosbuvir would infringe Idenix’s patent. Gilead stipulated to infringement under the district court’s claim construction but argued that the patent was invalid for failure to meet the written description and enablement requirements. The jury rejected Gilead’s arguments and upheld the patent’s validity. Gilead filed a renewed motion for JMOL with respect to written description and enablement. The district court denied the motion with respect to written description but granted JMOL on enablement. Idenix appealed. 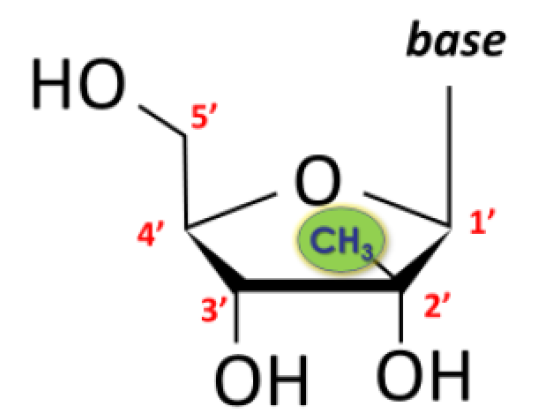 On appeal, Idenix argued that the key to its invention was the methyl group (CH3) in the 2’-up position (green oval). The district court construed “β-D-2’-methyl-ribofuranosyl nucleoside” to mean that there must be a methyl group in the 2’ up position, but that the substituents at the 2’ and 3’ down positions (which is depicted as an –OH group in the drawing above) could be “any non-hydrogen substituent.” Based on this construction, billions of theoretical compounds fall within the structural limitations of the claim.

Idenix argued that a person of ordinary skill in the art would not attach substituents at random and instead would know to “take into account the patent as a whole to focus on a ‘significantly smaller’ set of candidate compounds.” In addition to the eight compounds that were synthesized and tested for antiviral activity, the specification described the formula of thousands of “principal embodiments” of the claimed invention that had this 2’-methyl-up substituent. These additional embodiments were untested and uncharacterized, and the Federal Circuit found that given the unpredictability in the art, a person of skill in the art would have to test each of the thousands of compounds that met the structural limitations of the claims in order to determine which compounds were effective against HCV. While Idenix argued that such testing was routine, the Court found that the “decision here rests on the ‘limits on permissible experimentation’ not on the relative time that experimentation would take.” Here, practicing the full scope of the claims would have required excessive experimentation even if routine, and thus the patent was invalid for lack of enablement.

The Federal Circuit also found that the claims lacked written description. For the billions of compounds not disclosed by formula in the specification, the Court found that the “specification . . . provides no method of distinguishing effective from ineffective compounds” and therefore failed to adequately describe the necessary structural features of the genus. Further, the Court noted that the specification failed to disclose any “2’-flouro-down compounds” (Gilead’s infringing product was a 2’-flouro-down compound). The Court found that “in light of the conspicuous absence of that compound, a person of ordinary skill in the art would not ‘visualize or recognize the members of the genus’ as including 2’-fluor-down, and the specification could not demonstrate to a [person of skill in the art] that the inventor had possession of that embodiment at the time of filing.”

Judge Newman dissented, stating that the error was in interpretation of claim scope. She argued that a reasonable jury could have found that the claims were directed to the 8 β-D-2’-methyl-ribofuranosyl nucleoside compounds with antiviral data, and that claims of this narrower scope would comply 35 USC § 112.

Practice Note: Enablement is a fact-specific analysis, but here Idenix relied on antiviral activity of just eight compounds with very similar chemical structures to support claims to a much broader genus of compounds. At least in the chemical arts, it appears that the courts are looking for more experimental data from compounds with more diverse structures to support broad genus claims.

McDermott Will & Emery is a premier international law firm with a diversified business practice. Numbering more than 1,100 lawyers, we have offices in Boston, Brussels, Chicago, Düsseldorf, Frankfurt, Houston,...