As Celsius Network LLC, et al., Case Number: 22-10964 (MG), proceeds in the Bankruptcy Court for the Southern District of New York (the “Court”), the following summarizes two important case updates as of November 18, 2022:

Setting of Bar Date for Filing Proofs of Claim:

As outlined in the Bar Date Order, with few exemptions, any claim that is not filed by the respective bar dates listed above will be barred from being asserted against the Debtors unless such claim is already listed on the Debtor’s Schedules.  If the Debtor has listed a claim as contingent, unliquidated, or disputed, it is critical that a proof of claim be filed in order to reserve a right to the claim.

What must be included in the proof of claim:

Personal information not to be included:

As we have mentioned before, given the complexity of the claim it remains our recommendation that all parties file a proof of claim regardless of how their claim is scheduled.

As mentioned in our previous updates, the Court has approved procedures for an auction of the Debtors’ assets (in particular, the Debtors’ retail assets). Part of the controversy behind this auction is that parties are being asked to submit bids prior to a determination of how the company plans to treat the Custody accounts with a decision on the Earn accounts not even on the near horizon.

The Debtor has made it clear that the approval of these auction procedures is not a commitment to sell assets and is at least purporting to be considering restructuring and remaining a standalone entity as an alternative. Note the proposed sale here would take place under a plan of reorganization and not as a separate asset sale under Section 363 of the Bankruptcy Code.

Initial Bid: The initial bid deadline for retail assets is set for November 21, 2022, at 4:00 p.m. ET. This non-binding initial bid must include a price including for both cash and non-cash components as well as any conditions. Submitting this initial bid does not obligate the bidding party to bid further, nor will it definitely allow one to submit a final bid as the Debtor still needs to approve final bid candidates prior to giving them confidential information about the Debtor.

Final Bid: Final bids are due on December 12, 2022. In the final bid, the Debtors are looking for bids that, in theory, the Debtors can be ready to sign. This includes a signed transaction document with any markup that the bidder requests as well as committed financing, a good faith deposit of the greater of 10 percent of the bid or 20 million dollars.  Under these bid procedures, the Debtors are unwilling to accept any financing or other conditions There are several other requirements including that bids provide information on how with a potential buyer of the assets will deal with the Debtors. It is highly unlikely that any particular bid made on December 12, 2022, will be accepted in its form as submitted.

Many creditors are hoping that the auction will lead to a buyer taking over accounts that will include Earn accounts, thus allowing creditors to keep their accounts or a percentage of them intact. While this is in the realm of possibility, it is not a likely outcome.

An important element of the approved bid procedures is that it will allow the Debtors to sell the assets in question free and clear of liabilities.

In many ways, these bid procedures give the Debtors the ability to test the waters to gauge the interest of buyers in their assets without committing themselves to anything. As such, there is little that we can learn from here (for now) as to the final direction that the case is going to take or how claimants are going to be paid back.

A full listing of action deadlines is as follows, though may be subject to change: 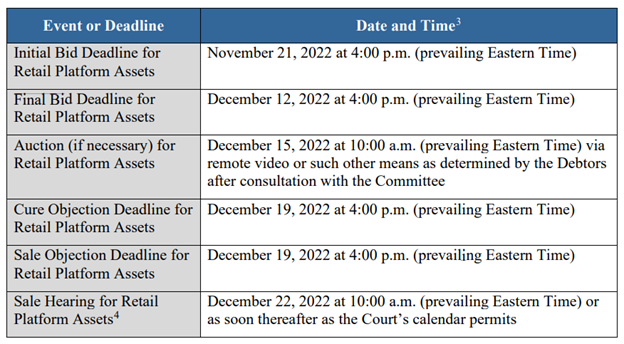 Stephen Rutenberg’s practice focuses on the intersection of special situations investing and FinTech including cryptocurrency and blockchain technology.

A significant component of Stephen’s practice relates to his work in the distressed debt market, representing clients in the purchase and sale of loans and securities of distressed and bankrupt companies. Recent representations include advising on the purchase, sale and financing of bankruptcy trade claims in several major chapter 11 cases, including Lehman Brothers, and the MF Global and Icelandic bank liquidations. He works with...