To provide additional financial support for Medicare providers responding to COVID-19, and pursuant in part to CARES Act requirements, the Centers for Medicare & Medicaid Services (CMS) expanded the Accelerated and Advance Payment Programs for providers and suppliers. CMS used existing rules that allow providers and suppliers to receive an advance on Medicare claims payments if they have experienced financial difficulties due to a delay in payments or in other exceptional situations.

Now, approximately four months after the first accelerated and advance payments were distributed, early applicants are approaching the date when Medicare will begin recouping payments through zeroed out claims, absent congressional action. These repayments are coming due at a time when providers still face critical financial challenges and reduced patient volume due to the pandemic.

COVID-19 placed significant financial pressure on hospitals, physician practices and other providers and suppliers. Some were overwhelmed by a dramatic increase in COVID-19 patients, while others sat empty as non-emergency procedures were cancelled and patients under stay-home orders delayed care. CMS used the Accelerated and Advance Payment Programs to provide cash flow to affected providers. Unlike the Provider Relief Fund, the Accelerated and Advance Payment Programs provide loans that must be repaid.

For providers and suppliers who participate in the Accelerated and Advance Payment programs, claims recoupment via withheld claims begins 120 days after issuance of the payment. For suppliers, repayment of the full balance is due 210 days after the issuance of the payment; most hospitals have a full year to repay the balance. For both the Accelerated and the Advanced Payment Programs, unpaid balances due at the end of the repayment period are subject to the private consumer rate of interest rate, currently 9.5%.

CMS paused both programs on April 26, 2020, citing other funds available to the provider community. 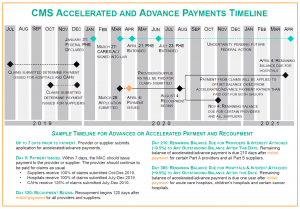 Payments Come Due for Hospitals, Physicians and Suppliers. Physician practices and other suppliers had 120 days from the date CMS issued their payment. At least one MAC has indicated recoupment began July 27, 2020.

Given the state of COVID-19 recovery, it seems likely that Congress will extend the recoupment period for loan recipients. In May 2020, the US House of Representatives passed the Health Economic Recovery Omnibus Emergency Solutions (HEROES) Act, which would extend the timeline for recoupment and repayment of the loans. On July 27, 2020, Senate Republicans introduced the Health Economic Assistance, Liability Protection and Schools (HEALS) Act, which also would extend the repayment and recoupment terms, although for a shorter period. HEROES would take the additional steps of reducing the interest rate and reducing the amount of clHT NNaims recoupment. HEALS does not include parallel proposals affecting interest rates or recoupment amounts.

Some provider groups are pursuing legislation that would forgive these loans altogether. H.R.7292, introduced in June, would, among other things, forgive debts arising under these programs for providers, suppliers and physicians meeting certain criteria and conditions. This bill has over 74 cosponsors as of July 31st, and support from both Republican and Democratic Representatives. Senate Democrats introduced a version of forgiveness in May. S. 3750 would grant CMS the authority to waive repayment for Accelerated and Advance payments for providers facing significant hardship for at least two years. Full forgiveness has not appeared in either HEROES or HEALS, making it a long-shot to be included in a negotiated compromise this month.

Leadership from both parties continues to work toward a deal on broad stimulus and relief legislation that also would address this program. Final agreement is anticipated sometime in the next few weeks, but it is unlikely that an agreement will be finalized before some providers’ and suppliers’ repayment periods commence.

How Will the MACs Respond? Practical Considerations for Providers

Seven MACs are tasked with administering accelerated and advance payments and taking initial actions to recoup Medicare funds. In general, CMS instructs MACs on how to adhere to the agency’s guidance and regulatory requirements. MACs therefore may need clear instructions from CMS to alter their recoupment process in response to any legislative change. It is unlikely that CMS will take any such action in the absence of legislation. Providers and suppliers that obtained advance or accelerated payments therefore may experience a few bumpy weeks as MACs implement a large-scale recoupment program under shifting instructions from CMS, and as CMS awaits final stimulus legislation. Early recipients of advance or accelerated payments may be subject to claims reductions that start and stop as a result of the shifting policy environment and current lack of clarity for MACs.

Providers and suppliers may wish to take steps now to advocate for a smoother approach and to prepare operationally for a period of uncertainty. Providers and suppliers can communicate with their MACs to request information on how they will handle recoupment of advance and accelerated payments, and to request a brief grace period to account for the legislative process on Capitol Hill. Providers and suppliers also should continue to share feedback with CMS and the MACs regarding the internal disruption that could result from recoupment processes being started and stopped, and to urge CMS and the MACs to hold off on recouping funds until the timeline is finalized legislatively.

Finally, providers and suppliers can continue to put pressure on Congress to resolve this matter legislatively as quickly as possible. In the meantime, providers should take operational steps to prepare for recoupment to begin.

Paul is a highly regarded physician and healthcare executive with deep experience in both the academic and patient care spaces. He offers clients critical insights across a wide range of clinical areas and healthcare technologies, and provides guidance on Medicare policy and regulatory requirements.  Paul also has significant experience in health outcomes research and scientific computing.

Before joining McDermottPlus, Paul served as chief medical officer and MolDX director of clinical science at a commercial provider and Medicare Administrative Contracting company. MolDX has a...

Sheila advises clients on a wide variety of Medicare payment and regulatory issues. With more than 10 years of experience, Sheila is highly skilled in the areas of Medicare physician and hospital outpatient payment, Medicare quality programs, and the establishment and valuation of CPT® codes. Sheila has a deep understanding of emerging technology’s impact on Medicare reimbursement. She has facilitated relationships and discussions with physician specialty societies and industry stakeholders, helping to develop mutually beneficial collaborations. Sheila also has guided...