On February 18, 2022, the European Union (EU) made a Request for Consultations with China over anti-suit injunctions in standard essential patent (SEPs). Chinese courts have issued these injunctions blocking patent holders from enforcing their foreign patent rights outside of China (i.e., in Europe and Japan) with extensive daily fines for violators.  The dispute settlement consultations that the EU has requested are the first step in World Trade Organization (WTO) dispute settlement proceedings. If they do not lead to a satisfactory solution within 60 days, the EU can request the WTO to set up a panel to rule on the matter. 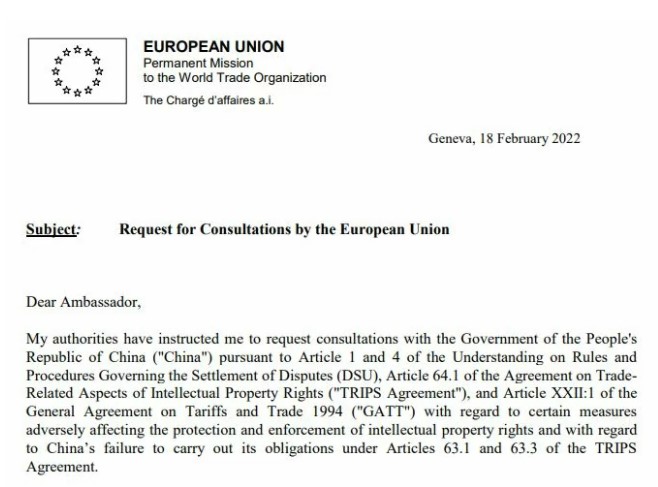 The patents concerned by this case are standard-essential patents (SEPs). SEPs are patents that are essential in order to manufacture goods that meet a certain international standard. Because the use of the technologies protected by these patents is mandatory for the production of, for example, a mobile phone, patent owners have committed to licensing these patents to manufacturers under fair, reasonable, and non-discriminatory (FRAND) terms. A mobile phone manufacturer should, therefore, obtain a license (subject to a license fee negotiated with the patent holder) for these patents. If a manufacturer does not obtain a license, and/or refuses to pay, a patent holder can enforce these patents and get a court to stop the sales of the products incorporating that unlicensed technology.

As explained by the Request:

In its decision of 28 August 2020 in the case of Huawei v Conversant1
the SPC decided (“SPC decision of 28 August 2020”) that Article 1002
of the Civil Procedure Law of the People’s Republic of China (“Civil Procedure Law”) allows a Chinese court to put in place a provisional
measure prohibiting a party from applying for enforcement of judgments of a non-Chinese court or from seeking judicial relief out with the jurisdiction of China. Furthermore, it decided that in case of violation of that “anti-suit injunction”, a Chinese court can impose the maximum fine provided for under Article 115 (1)4 of the Civil Procedure Law of 1 million RMB (138,983 EUR / 156,845 USD per day and order that it accumulate on a daily basis. The SPC decision of 28 August 2020 gave a further interpretation of the relevant provisions of the Civil Procedure Law, building on a previous judicial interpretation provided in “Supreme People’s Court’s Provisions on
Several Issues Concerning the Application of Law in Examining Act Preservation Cases in Intellectual Property Disputes”.

The SPC decision of 28 August 2020 was taken in the context of an appeal by Conversant against a decision of 16 September 2019 by the Nanjing Intermediate People’s Court of Jiangsu Province, which had determined the license rate for a 4G standard essential patent owned by Conversant and
implemented by Huawei in 4G mobile terminal products.6 On 27 August 2020, Huawei applied for act preservation ordering Conversant not to apply for enforcement of an injunction granted by the District Court of Düsseldorf, Germany on 27 August 2020. On 28 August 2020, the SPC
issued the anti-suit injunction order, prohibiting Conversant, under the sanction of daily penalties, from applying for the enforcement of the first-instance injunction judgment issued by the District Court of Düsseldorf before the SPC final judgment becomes effective.

This decision also made the Supreme People’s Court Top 10 Cases List of 2020 indicated this decision was important and not a one-off.

After the SPC decision of 28 August 2020, two lower Chinese courts (Intermediate People’s Courts), issued anti-suit injunctions in four cases.  At least one was affirmed by the Supreme People’s Court as discussed here.

The full text of the Request is available here.