You’ve heard all about them.

But is there a connection?

Might the two most critical pieces of ATDS lingo in America today be read in harmony?

Find out in three days when I take the stage at PALOOZA and break it down!

I mean I will be talking Florida and Facebook at the Great Vegas Compliance Palooza in a  TWO HOUR segment on Friday. And yes it will be the most definitive discussion–with Q and A–on the topics I have given yet.

But I’ll share some thoughts now as well–just in case any of you are going to miss the big show.

Look I don’t mean to be a conspiracy theorist here, but the more I look at these two ATDS formulations, the more I see similarity.

Let’s look at the language here.

An ATDS is Florida is “[an] automated system for the selection or dialing of telephone numbers.”

See that phrase: “automated system for the selection… of telephone numbers.”

One can read this a couple of different ways–perhaps it means merely automation in the process of selecting numbers to be part of a campaign. No biggie–very few people select campaign parameters without human decision making. But there is another read here as well–allowing a system to choose the sequence of dialing (i.e. in a blast campaign or a campaign where many different numbers will fit within campaign parameters) may trigger the Florida statute. And this might have implications even in a click to dial environment.

For instance, one piece of click to dial software has been described in a court opinion as operating thusly: “the agent merely clicks from the bottom to the top through the list, can only stop clicking numbers if he or she goes on break or logs out of the system altogether, the agent cannot decide to skip calling a number or to call a different number, and the system makes the call without a live person on the line, only transferring the call to a live agent if it detects a human being has answered the phone.”  (Emphasis added).

That lack of any ability to change course in a campaign may mean that the system is “selecting” numbers to be dialed in an automated way that triggers the Florida statute. We’ll need case law to develop to know for sure.

“For instance an autodialer might use a random number generator to determine the order in which to pick phone numbers from a pre-produced list.”

Mercifully a couple of courts have read this language narrowly (and quite properly so), but that phrase “determine the order” is still pretty spooky. It sounds very similar to the Florida bill that potentially looks at automation to determine dialing sequence!

To be sure Facebook requires the use of an R&SNG to determine the sequence of dialing–not just automation–so it is definitely narrower than Florida. But as many folks have discovered recently, drilling down and identifying PRECISELY how dialing sequence is determined by dialers can pose quite the challenge.

And then, of course, there is little discussed but critical FN6 sitting out there.

In Facebook the Supreme Court seemingly rejected the use of human intervention as the determining criteria for ATDS usage:

“[A]ll devices require some human intervention, whether it takes the form of programming a cell phone to respond automatically to texts received while in “do not disturb” mode or commanding a computer program to produce and dial phone numbers at random. We decline to interpret the TCPA as requiring such a difficult line-drawing exercise around how much automation is too much.”

You read all of this together and I can’t shake the idea that traditional click to dial systems may not safely achieve compliance objectives in light of Florida and Facebook. It seems to me that systems, where the computer is selecting the order of numbers to be called, may trigger both the TCPA and the Florida bill, even where a human is clicking to initiate each call–human intervention simply may not be the standard anymore. And THAT may end up being the second most important piece of Facebook in the long term.

There’s no case law on this yet–and I still think the vast majority of courts will continue to read Facebook narrowly– but I definitely don’t want to see a bunch of folks thinking they are compliant when they may not be. Talk it over with your counsel. Human SELECTION dialers are out there where an agent doesn’t just click but actually chooses numbers to be dialed (I know of Safe Select, but there are probably others out there–so do your homework.) And building in a high degree of intelligence in your list management and campaign software is critical. (I can help with that, of course ;)).

The other big category of outreach that falls outside of either bill–it seems to me at least–is triggered or AI texting. When an event IN THE REAL WORLD must occur in order for a text campaign to start then neither an R&SNG or a computer system is choosing dialing sequence– the dictates of fate, nature, and the deterministic laws of physics are. (I mean, or free will if you believe in that sort of thing.) For instance the case with the alarm-triggered SMS messages is the classic case where Facebook is on all fours.

That’s why my stoplight looks the way it does: 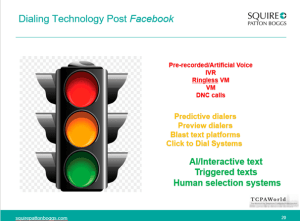 Eric J Troutman is known as one of the country’s prominent class action defense lawyers and is nationally recognized in Telephone Consumer Protection Act (TCPA) litigation and compliance. He has served as lead defense counsel in more than 70 national TCPA class actions and has litigated nearly a thousand individual TCPA cases in his role as national strategic litigation counsel for major banks and finance companies. Eric also helps industry participants build TCPA-compliant processes, policies, and systems.

Eric's perspective allows him to...