Fourth Circuit Weighs In On Pandhandling and Fortune Teller Ordinances

Today, we're looking to land use issues decided in the recent past by the federal courts.  Specifically, we're looking to the United States Court of Appeals for the Fourth Circuit, which encompasses North Carolina, South Carolina, Virginia, West Virginia and Maryland.  I think the reasons for our particular interest in the Fourth Circuit are either obvious or easily discoverable.  Ok, they're obvious.

We've been alerted to these decisions by Professor Patricia Salkin through her Law of the Land blog, which the North Carolina Land Use Litigator finds very helpful in keeping sharp on the shape of legal landscapes.  And yes, it happens that Professor Salkin links to our blog in her esteemed "blogroll".

Land use issues are not a common topic in the federal courts, but they are always interesting when they do arise.  Let's review.

Clatterbuck v. City of Charlotte (4th Circuit 2013).  The City of Charlottesville, Virginia enacted an ordinance prohibiting the solicitation of "immediate donation of money or other thing of value" by "spoken, written, or printed word" on the City's "Downtown Mall" when "those streets are open to vehicular traffic."

A group of "impecunious" men "reliant to a certain extent on begging" filed suit pursuant to 42 U.S.C. 1983 to challenge the ordinance, claiming the ordinance "violates their First Amendment right to beg, impermissibly restraining their protected speech activity and livelihood."  The trial court held that the plaintiffs had standing, but dismissed the complaint for failing to state a "cognizable" First Amendment claim.  The trial court reasoned the ordinance to be "a content-neutral, permissible time, place, and manner restriction".

On appeal, the Fourth Circuit affirmed on standing but reversed the trial court as to the "cognizability" of plaintiffs' claim.  First, the Fourth Circuit recognized the protected place of a "downtown mall" in a First Amendment analysis, calling such a location the "archetype of a traditional public forum" and a "quintessential public forum over which the First Amendment's shield is strongest."  Second, the Fourth Circuit rejected the trial court's conclusion that the panhandling ordinance is "content neutral", stating that the "content based" restriction (therefore, subject to strict scrutiny) distinguishes between solicitation for things of value/solicitations for things of no value and between solicitations for future donations/immediate donations.

Would the ordinance have fared better on appeal had it applied throughout the City, as opposed to only the downtown mall?  What about an ordinance leaving the value/no value distinction but eliminating the timeframe distinction?  The trial court will have the chance to review on remand consistent with the opinion.

Moore-King v. County of Chesterfield (4th Circuit 2013).  A "psychic", who sought to open her business, refused to pay a license fee pursuant to a County ordinance regulating fortune tellers.  Instead, she filed suit against the County alleging violation of the federal constitution and federal statutes, most notably First Amendment free speech and free exercise clause, Equal Protection and Religious Land Use and Institutionalized Persons Act (RLUIPA) claims.

The Fourth Circuit also affirmed summary judgment on the First Amendment claim, finding in favor of the fortune teller though with a little more pizazz.  First, the Fourth Circuit determined that the trial court was wrong to conclude telling fortunes is "inherently deceptive speech" outside the confines of the First Amendment.  Rather, the Fourth Circuit reminds the world of the fortune teller's own website disclaimer ("Sophie does not provide a 100% guarantee, as people, perceptions, and decisions, can fluctuate, and circumstances out of everyone’s control can happen.") and intimates that such an "inherently deceptive" exception is reserved for the likes of Geritol and New York Mets preseason advertisements.

Second, answering the "more challenging question", the Fourth Circuit concludes that the ordinance is a content-neutral regulation within the "professional speech doctrine":  "Under the professional speech doctrine, the government can license and regulate those who would provide services to their clients for compensation without running afoul of the First Amendment....  And a state’s regulation of a profession raises no First Amendment problem where it amounts to 'generally applicable licensing provisions' affecting those who practice the profession." 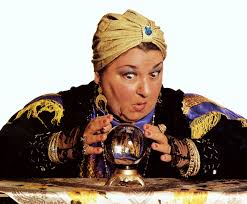 Man, I really did not see this ruling coming.