Gambling With Graffiti: Using Street Art on Goods or in Advertising Comes With Significant Risks

Graffiti. Guerrilla Art. Street Art. Aerosol Art. Tagging. It appears on the sides of buildings, highway signs, boundary walls and subway cars. Sometimes, graffiti is applied with permission and, on occasion, works may be commissioned. More often, and consistent with the renegade spirit of many of its creators, graffiti is affixed to a public surface illegally.

Some consider graffiti an eyesore; an act of vandalism that should be covered over at the earliest opportunity. In fact, the renowned UK street artist, Banksy, once joked, “People say graffiti is ugly, irresponsible and childish... but that’s only if it’s done properly.” Yet, others consider street art to represent one of the purest forms of free expression by marginalized voices with little or no access to mainstream media.

Love it or hate it, graffiti is considered one of the fastest growing artistic movements. Some have characterized it as a twentyfirst century successor to the Pop Art movement of the 1960s. Once associated with rock and roll and later linked to the antiestablishment punk rock movement, contemporary graffiti styles more recently have been heavily influenced by hip hop culture. Today’s street art often conveys a sense of urban grittiness and the rebelliousness and hipness of youth culture.

No wonder that it has become increasingly popular and legitimized — indeed, street art has begun to be taken so seriously that well-known street artists have had exhibitions at venues like the Bristol Museum and Art Gallery in England, the Los Angeles Museum of Contemporary Art, the Corcoran Gallery of Art in Washington, DC and the Palazzo Cipolla in Italy. Works by celebrated street artists also have been sold for staggering prices at prominent art auction houses.

Therefore, it should also be no surprise that street art has become increasingly commercialized. Fashion designers have incorporated distinctive and colorful graffiti designs into apparel and footware; major corporations have featured wall murals and other street art in their marketing campaigns; and social media influencers pose in front of urban artwork in the promotional photographs and videos they post to YouTube, Instagram and Facebook. Typically, the artists have not consented to these uses. In fact, they may not even have been asked.

More and more frequently, those who create such works have been fighting back, asserting rights under copyright (for the unauthorized copying of their artwork) and trademark law (for example, when the copied artwork includes the artist’s pseudonym or “tag”). The list of retailers who have found themselves in disputes with recognized street artists over unconsented-to uses of graffiti includes American Eagle Outfitters, Coach, Fiat, General Motors, H&M, Epic Records, McDonald’s, MercedesBenz, Moschino, Roberto Cavali and Starbucks.

Many questions about the intellectual property rights of street artists remain unsettled. Commissioned works and works that have been applied to buildings and other public spaces with permission may be entitled to copyright protection. But what about works that were applied illegally? Proponents of copyright protection argue that copyright law should be agnostic towards works created by illegal means and should only be concerned with protecting artistic expression.

Opponents question how copyright law could permit graffiti artists to benefit from their crimes. They assert that one cannot reconcile rewarding them with copyright protections on the one hand, while punishing them criminally on the other hand.

Assuming that legality is not a bar to copyright protection, then graffiti also would be subject to the various requirements and limitations of copyright law. For example, in order to receive protection under copyright law, a work of street art must be a work of authorship that is original and fixed in a tangible medium of expression. In other words, the work must have originated with the author and must be sufficiently permanent or stable for it to be perceived, reproduced or otherwise communicated for a period of more than transitory duration.

Even if it satisfies these basic characteristics, not every piece of graffiti would be eligible for copyright protection. Copyright law does not protect, for example, titles, names (including pseudonyms, like a street artist’s “tag”), mottos, short phrases or slogans, familiar symbols or designs, or mere variations of typographic ornamentation, fonts, lettering or coloring. So, if a particular piece of graffiti consists only of these elements, it may not be eligible for copyright protection even if it was legally created.

As this issue of Kattison Avenue was going to press, a muralist named Allison Tinati, who signs her works as “Hueman,” filed a copyright infringement lawsuit against Alaska Airlines in federal court in Los Angeles. She alleges that her company is the registered copyright owner of a large mural, entitled “Bloom,” that she painted on commission (not illegally) in the Arts District of Los Angeles, and that the airline used the mural without her consent in its marketing of flight sale promotions. Hueman LLC v. Alaska Airlines, Inc., Case No. 20-cv-06539 (C.D. Cal. Filed July 23, 2020). This is just the latest instance of a dispute over unconsentedto use of street art.

Given this challenging landscape, companies must take care when incorporating graffiti-like elements or patterns into apparel and other goods, when designing marketing campaigns that will include filming or photography in locations where street art is prominently displayed and when instructing social media influencers on the types of imagery and settings they should use. An important initial step is to engage in due diligence: investigate who the artist is and whether he or she can be located and contacted; determine whether the work was painted 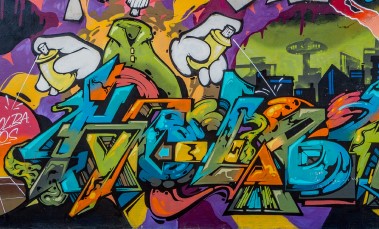 with permission or applied illegally; and evaluate whether the work in question satisfies the requirements for copyright protection. If appropriate, a company should then attempt to obtain consent to incorporate the work into the company’s merchandise, apparel and/or marketing campaign. If the artist cannot be reached or is unwilling to give his or her consent, the company should consider using an alternative piece of street art whose creator can be found and will consent. In the case of social media influencers, companies should ensure that their influencer agreements prevent the influencer from appearing in promotional photographs in which street art is prominently displayed and/or clearly recognizable without first consulting with the company.

Using graffiti on goods or in promotional campaigns may bring “street cred” to a retailer or advertiser. But unless the decision to incorporate such artwork is evaluated carefully, it could end up being more trouble than it was worth.

Leonard v Nike: Copyright in the Klaw
By
Jack Blakey
2019 IP Law Year in Review: Copyrights
By
Jodi Benassi
Back to the Future—Supreme Court to Review Rule On Post-Expiration Patent Royalties
By
Paul Devinsky
Non-Consumer Confusion May Factor into “Likelihood of Confusion” Analysis
By
McDermott Will & Emery
Ex-Guitarist Must KISS Royalties Goodbye to Satisfy Judgment
By
Elisabeth Morgan
The Ninth Circuit's Holding in Levi Strauss v. Abercrombie & Fitch - "Degree of Similarity" Is But One of Six TDRA Factors, Not the Threshold Test -- Marks An Important Decision Elucidating The Proper Dilution Standard
By
Fashion and Apparel Team
Advertisement