In the latest salvo exchanged between two competing drainage product companies, Invisaflow, LLC ("Invisaflow"), based in Alpharetta, Georgia, filed a complaint in the Northern District of Georgia against competitors Euramax International, Inc. and Euramax Holdings, Inc. (collectively "Euramax"), both based in Norcross, Georgia, alleging that Euramax infringes its patent directed to gutter downspout extension attachments.

The complaint alleges that Euramax's "Extend-A-Spout v2 Low Profile Drainage System" product infringes the '195 Patent, and further alleges that Invisaflow met with Euramax on May 22, 2014, to notify Euramax of its infringement and requested that Euramax cease and desist from further production and sale of the accused product.  Representative Figure 1 of the '195 Patent is shown below: 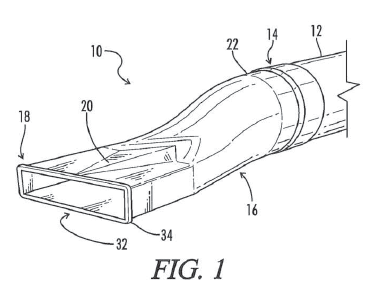 On October 27, 2014 Invisaflow filed an amended complaint, which revised some details regarding giving notice of the patent, but also added three new counts to the action for alleged trade dress protection relating to the StealthFlow downspout extension product.  The amended complaint added counts for federal trade dress infringement and unfair competition under Section 43(a) the Lanham Act (15 U.S.C. 1125(a)), and violation of the Georgia Deceptive Trade Practices Act (O.C.G.A. 10-1-370 et seq.).

Invisaflow alleges that the StealthFlow product incorporates a distinctive and nonfunctional "long low-profile shape beginning with a gradual transition that emanates from a round-shaped piping." Invisaflow claims that the StealthFlow trade dress has acquired secondary meaning among the consuming public and further alleges that Euramax purposefully designed the accused "Extend-A-Spout" product to replicate the unique look and feel of the StealthFlow product.  Invisaflow alleges that it has "received numerous inquiries from consumers who believe that the "Extend-A-Spout" product originates from, or is sponsored or approved by, Plaintiff Invisaflow."  A comparison of the two extension products is depicted below: