The Longest Dance – The WOTUS Two-Step

We are on the eve of a new regulatory definition of "waters of the United States" for the Clean Water Act.

The United States Environmental Protection Agency ("EPA") and Army Corps of Engineers ("Corps") completed step one of the two-step "repeal and replace" process ordered by President Trump in 2017 by finalizing a new rule on September 12, 2019, to repeal the 2015 Clean Water Rule (the "Clean Water Rule").

How Did We Get Here?

Since 1972 the Clean Water Act ("Act") has prohibited the unpermitted discharge of pollutants and dredged and fill materials into navigable waters. "Navigable waters" is defined in the Act as "waters of the United States, including the territorial seas," but Congress has never defined "waters of the United States" ("WOTUS").  For the last 40 years, the EPA, the Corps, the courts, and the regulated public have grappled with exactly what waters are subject to federal jurisdiction.

In the early 2000s, two Supreme Court decisions expanded the interpretation of WOTUS from its then-accepted definition—rivers, lakes, coastal waters, tributaries, and wetlands that affect interstate commerce—to include those waters with considerably less direct subsurface connection to traditional navigable waters.  One of these decisions, Rapanos v. United States (2006), was decided by a split court with no controlling opinion.  The lower courts, the EPA, and the Corps routinely began following now-retired Justice Anthony Kennedy's concurring opinion rather than the plurality opinion by the late Justice Antonin Scalia.  Justice Kennedy's lone opinion advocated use of a "significant nexus" test—that jurisdiction under the Act extends to bodies of water and wetlands, alone or combined with other similarly situated lands that significantly contribute to the chemical, physical, and biological integrity of traditional navigable waters.  But the application of this significant nexus test on a case-by-case basis to waters in different states across the country led to inconsistent and unpredictable results for the regulated community. 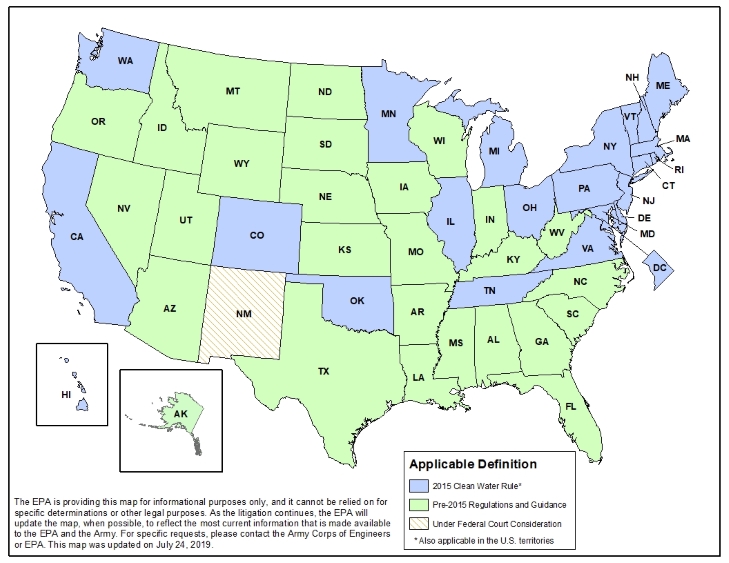 Two Steps Forward, One Step Back

For Step One, the EPA and the Corps, in February 2018, suspended implementation of the Clean Water Rule until 2020.  But this effort, often called the Applicability Rule or the Suspension Rule, was immediately challenged and struck down in two federal courts.  The agencies appealed.

Meanwhile, for Step Two, the agencies crafted a new definition of WOTUS, interpreting the term as expressed by Justice Scalia in the Rapanos plurality opinion.  Under this opinion, jurisdiction of the Act extends only to those waters which are: traditionally used in commerce; interstate; relatively permanent and connected to traditional navigable waters; and wetlands with a continuous surface connection.  Such a definition narrows the scope of waters subject to jurisdiction under the Act and also retracts some of the coverage broadened under the significant nexus test.

In February 2019, the EPA and Corps published in the Federal Register for public comment a revised definition of WOTUS to clarify the uncertainty still surrounding the Clean Water Rule.  According to the agencies, the proposed WOTUS definition generally includes:

The EPA and Corps then took stock of the challenges to the Applicability Rule across the country.  On March 8, 2019, the agencies voluntarily dismissed the appeals to focus collective efforts on finalizing the revised definition of WOTUS based on public comment received during the notice period.

Finally, on September 12, 2019, EPA and the Corps announced the formal repeal of the Clean Water Rule to return to national uniformity under the pre-2015 regulations.  The final rule repeal was published in the Federal Register on October 22, 2019, and will take effect 60 days thereafter, on December 23, 2019.  At that time, Step One will be complete.  The agencies then will implement the pre-2015 regulations until a replacement rule is effective.

Unfortunately, companies now have the same regulatory uncertainty that prompted nationwide efforts to define WOTUS over the last 12 years.  Those with interests in real estate development, agriculture, and manufacturing should make sure advisory teams carefully review current regulations, agency guidance documents, and longstanding agency practice before engaging in land-disturbing activities.

Be on the lookout for the Finale in early 2020 – publication of the Replacement Rule.

Amy leads the Environmental practice with a focus on the environmental aspects of real estate and business transactions, including coastal development.  She has built trust with her clients by providing practical business advice regarding regulatory compliance; conducting due diligence; remediating contaminated properties; meeting the requirements of water, wetland, and stormwater permitting standards; and, devising strategies for sensitive and contaminated properties through Brownfields redevelopment and green building practices.  Amy's philosophy of communication and...