Mexico’s federal government will soon cease updating its COVID-19 pandemic monitoring system on a biweekly basis, Dr. Hugo López-Gatell, Mexico’s undersecretary of prevention and health promotion, said in a recent press conference. The announcement comes on the heels of the four-tiered system showing all thirty-two states in green status—the only status without restrictions on business and social activities—for the second period in a row.

An announcement by the General Health Council that the monitoring system will no longer be updated every two weeks has not yet been published in the Official Gazette of the Federation, but Dr. López-Gatell’s statement provides a strong indicator that the federal government sees the pandemic as winding down in Mexico. Aguascalientes, for example, is not currently reporting any hospitalizations due to COVID-19, Baja California reports less than 1 percent of the population with active cases, and Coahuila recently reported only thirty-four people with active cases, thirteen of whom were hospitalized.

Face masks are no longer mandatory under federal guidance, but they are still recommended in closed spaces, Dr. López-Gatell said. Mexico City, however, still requires the use of face masks in private offices and other indoor places, as well as the following measures to prevent the spread of COVID-19:

The monitoring system was implemented in June 2020, and it is used to alert residents to the epidemiological risks of COVID-19 and provide guidance on restrictions on certain activities in each of the country’s states. As seen in the map below for the period of April 18 through May 1, 2022, all states and the capital are in green status, according to federal designations. 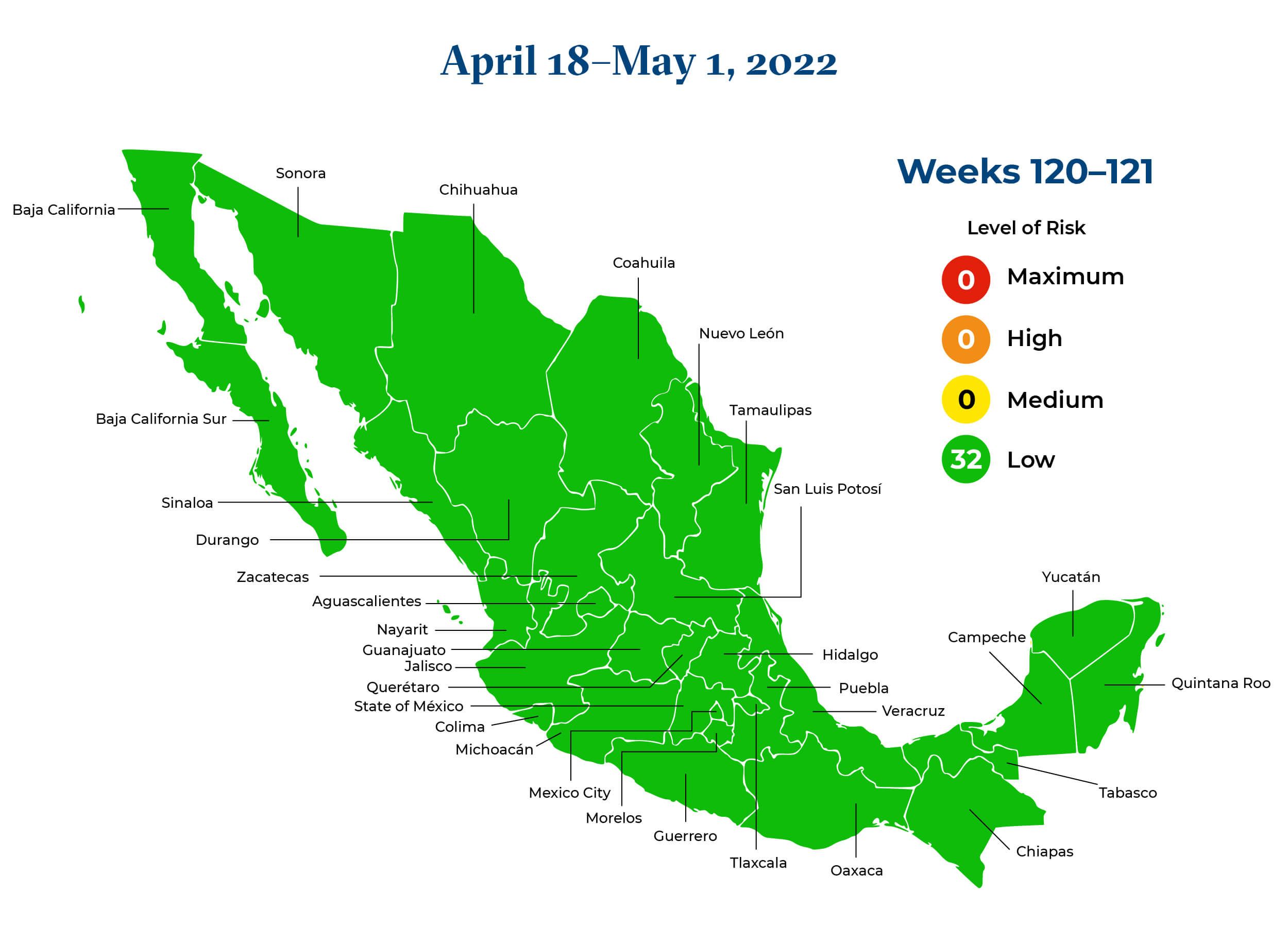 This chart presents the traffic light status of each state, and, as applicable, variations between federal and local traffic light statuses based on publications of the federal Ministry of Health and status reports provided by each state. As some of Mexico’s thirty-two states have implemented their own monitoring systems, local statuses may at times vary from federally designated status restrictions. Puebla, for example, has designated five of its six regions in yellow status (medium risk) and the sixth, Puebla, home to the state’s capital, in orange status (high risk). Veracruz has instituted limited restrictions, although the vast majority of its 212 municipalities are in green status, and none in red status (lockdown except for essential activities).

An employer that contests a worker’s allegation that he or she was forced to resign and given instructions to sign a resignation letter would have to show evidence of the original letter, “which must contain the elements [that] … convincingly and consistently” demonstrating the “will, autonomy and spontaneity of the worker,” according to a recent isolated (i.e., nonbinding) decision of a Collegiate Circuit Court of Mexico City.

After proving the existence and elements of the letter, the worker would be required to show “the alleged physical, moral or economic influence, deception, coercion or intimidation,” the court held.

In light of the opinion and complementary to an employee’s resignation letter, an employer may want to have the employee who has announced the intention to voluntarily terminate the employment relationship sign a Letter of Work Certificate and a document pertaining to the severance payment.