Nearly all of Mexico’s central and northern states have been directed by the federal government to limit the number of people on-site for business and social activities to half their normal capacity in order to prevent the spread of COVID-19, according to the government’s latest pandemic tracking system update.

Limiting on-site activities to 50 percent of normal capacity is one of several measures the government recommends when states are designated at orange status under the nation’s four-tiered COVID-19 traffic light monitoring system, which was introduced in June 2020. The government uses the biweekly system—updated currently through the 111th week since its implementation—to alert residents to the epidemiological risks of COVID-19 and provide guidance on restrictions on certain activities in each of Mexico’s states. The federal Ministry of Health’s “Guidelines for Risk Estimation of the COVID-19 Traffic Light by Region” explains the procedures to be followed by local governments and the federal government to determine traffic light statuses.

Baja California Sur, the only state in northern Mexico that is not in orange status, is in yellow status. The government recommends that states in yellow status—a total of thirteen states in the current report—limit on-site business and social capacity to 75 percent of normal capacity, among other recommended measures to curb the spread of the pandemic.

Only four states—Campeche, Chiapas, Tlaxcala, and Veracruz—are in green status, down from twelve in the report for January 24–February 6, 2022. States may operate business and social activities without restrictions upon reaching green status. However, wearing face masks is recommended in closed public spaces and is mandatory on public transportation.

State governments may increase or decrease restrictions on certain activities. For example, in Aguascalientes, which is in orange status, the head of the state education ministry announced that in-person classes would resume on February 14, 2022, although remote learning options will continue to be provided for students whose parents decide to keep them at home. Aguascalientes was the only state in red status—the strictest status—in the previous report. No states are in red status in the current report.

Below is a map for the period of February 7–20, 2022, indicating the COVID-19 risk level in each of the states and the capital. 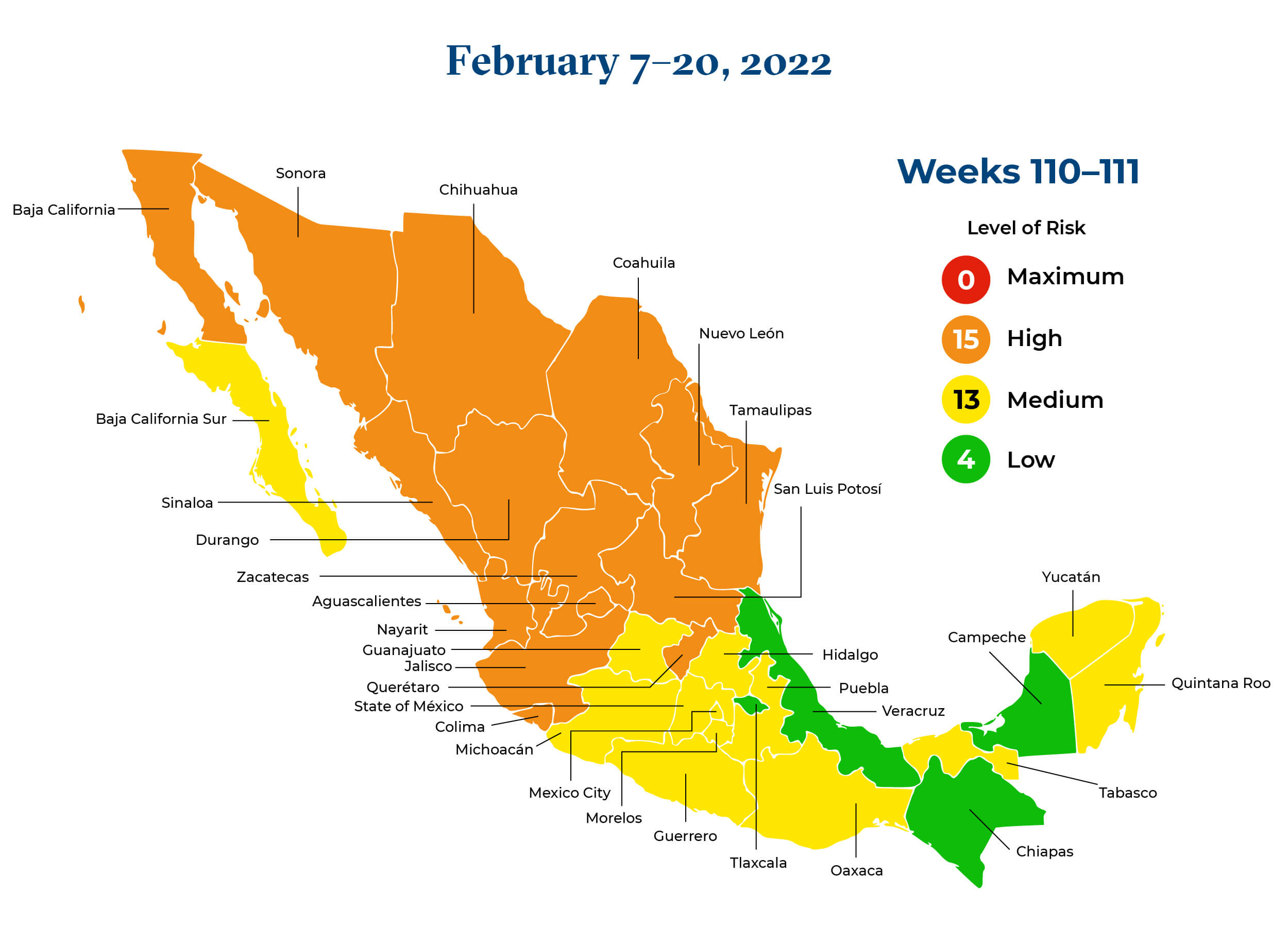 Mexico is in the fifth and final stage of vaccinating the population, with 64 percent vaccinated during this stage as of February 10. The government initiated the fifth stage in July 2021 and is aiming to complete it next month.

In its February 15, 2022, “Daily Technical Report,” the Ministry of Health stated that there have been 5,321,744 confirmed cases since the start of the pandemic in Mexico, with 140,530 confirmed cases added over the two-week period of February 1–14, 2022. The government has also reported that there have been 313,608 total deaths due to COVID-19 nationwide. However, the number of deaths associated with COVID-19 could be significantly higher than the confirmed number, when factoring in “excess deaths”—i.e., the number of deaths that exceeds what would be expected if not for the pandemic.

In addition to sending data to the federal government, state governments have also been issuing regular updates for the public. Morelos, for example, stated on February 9, 2022, that to date 61,091 people in the state had been confirmed to have contracted COVID-19, and 10 percent of them had died. The state’s Ministry of Health emphasized the toll on healthcare professionals, pointing out that the virus had claimed the lives of forty doctors, thirteen nurses, and eighteen other healthcare workers.

Mexico City will remain in yellow status through February 20, 2022, the Mexico City government announced. Mexico City, in whose metropolitan area about a fifth of the country resides, entered yellow status on January 21, 2022, after having operated in green status since early November 2021. Government officials stated that no economic activities would be closed due to the change in status, but they urged the population to continue complying with public health measures and practices, such as mask wearing and social distancing.

Finally, the Administrative Verification Institute, along with other Mexico City government authorities, will continue to visit businesses to verify compliance with general and specific sanitary measures for the protection of health in the workplace. The authorities may levy fines against employers found to be out of compliance with the health and safety measures. Noncompliant employers may be subject to the total or partial temporary suspension of work centers for up to fifteen calendar days. Noncompliant employers may also be subject to other applicable sanctions.