This post follows up on Judge Ross’s Order of June 6, 2016, in which she allowed Modtruss, Inc. (“Modtruss”), to clarify its intent with regard to a prior motion for a temporary restraining order and preliminary injunction against Defendant, Battlefrog LLC (“Battlefrog”). Escaping the technical mooting of its motion by the filing of an intervening amendment, Modtruss accepted the Court’s invitation to adopt is prior briefing and arguments and Battlefrog similarly went along with the suggestion – thus positioning the motion for the current ruling.

Judge Ross described the underlying patent, U.S. Patent No. 8,418,425 issued on May 13, 2014, as protecting “beams, which allow for temporary structures to be efficiently constructed.”  Battlefrog incorporates rectangular beams in components on the obstacle course races it designs and operates.  The alleged infringing beams were referred to by the Court as the “Accused Obstacles.”  Two figures from the patent are depicted below: 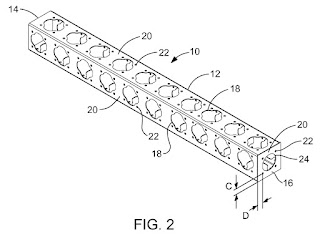 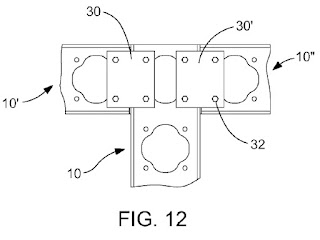 A plaintiff seeking the extraordinary relief of a preliminary injunction must establish four factors: “that he is likely to succeed on the merits, that he is likely to suffer irreparable harm in the absence of preliminary relief, that the balance of equities tips in his favor, and than an injunction is in the public interest.”  Quoting Trebro Mfg., Inc. v. Firefly Equip., LLC, 748 F.3d 1159, 1165 (Fed. Cir. 2014) (quoting Winter v. Nat. Res. Def. Council, Inc., 555 U.S. 7, 20 (2008)).

In this case the Court focused on one disputed word in the asserted claim – “same.”  The patent covered beams “that the sides have a fastener hole pattern and the end plates have the same fastener hole pattern.”  The movant, Modtruss, argued that “same” meant “match.”  Judge Ross noted that the patent never mentioned the word match or otherwise sought to alter the ordinary meaning of the word “same,” which is “not different” and “exactly like . . . something else.”  Citing, e.g., Merriam Webster Dictionary, “same,” (last visited June 22, 2016).

The Court next turned to the trade dress allegations, noting three necessary requirements for Modtruss to prove:  “(1) the defendant’s product is confusing similar to its product; (2) the similar features of the two products are primarily non-functional; and (3) the plaintiff’s product is distinctive.”  Miller’s Ale House, Inc. v. Boynton Carolina Ale House, LLC, 702 F.3d 1312, 1322 (11th Cir. 2012).

Judge Ross noted that the primary distinctive characteristic of Modtruss’s product on which it relied for its trade dress claim was that its product was primarily a “sparkly aluminum” color, which the Court agreed was non-functional. Yet Modtruss’s evidence showed that it achieved its “sparkly brushed aluminum” finish through a unique process.  On the other hand, the evidence was that Battlefrog’s aluminum color was merely the raw aluminum.  In addition, both parties used different colors and Modtruss failed to establish that its “sparkly aluminum color” had acquired secondary meaning in the mind of the public.  Therefore, there was no likelihood of success on the merits on Modtruss’s trade dress claims.

The Court turned next to irreparable harm, noting that its analysis was effected by the failure of Modtruss to establish a likelihood of success on the merits of either of its substantive claims.  In addition, Judge Ross noted that Modtruss had raised safety concerns with Battlefrog’s product and potential harm to its reputation and goodwill from product failures.  However, the Court went over evidence that the product had been changed and no further safety failures had occurred, making this potential loss too remote and speculative.

In turning to Modtruss’s loss of market share arguments, the Court noted that Defendant does not sell the Accused Obstacles (but merely uses them in providing services) and, thus, Modtruss and Battlefrog are not competitors.  ActiveVideo Networks, Inc. v. Verizon Commc’ns, Inc., 694 F.3d 1312, 1339 (Fed. Cir. 2012) (there was no irreparable harm where the parties did “not share a customer base”).  Modtruss’s loss of market share is from Battlefrog’s failure to purchase from Modtruss – a loss compensable by damages.  A pre-suit offer by Modtruss to license Battlefrog was also found to undercut its irreparable harm assertions.

Due to potential cancellations of upcoming events and the necessity to reconstruct its obstacles, the Court found that the balance of the equities favored Battlefrog.  Similarly, the lack of likelihood of success on the merits prevented the public interest from favoring Modtruss.

In short, Modtruss failed to carry its heavy burden of persuasion for the extraordinary relief sought, and the Court denied the motion.