July 2015 marks the second anniversary that the whistleblower protection provisions of the 2013 Defense Authorization Act (NDAA) became effective. The broad scope of protected whistleblowing, favorable causation standard and wide range of remedies render the NDAA an effective tool to combat whistleblower retaliation against employees of government contractors and grantees.

The scope of protected whistleblowing under the NDAA whistleblower protection provisions includes the disclosure of information that the employee reasonably believes is evidence of:

To be protected, the disclosure must be made to a Member of Congress or Congressional committee, an Inspector General, the GAO, a federal employee responsible for contract or grant oversight or management at the relevant agency, an authorized official of DOJ or other law enforcement agency, a court or grand jury or a management official or other employee of the contractor or subcontractor who has the responsibility to investigate, discover, or address misconduct.

The burden of proof and causation standard in NDAA whistleblower cases are very favorable to whistleblowers.  The complainant prevails merely by demonstrating that the protected disclosure was a contributing factor in the personnel action, which can be met by showing knowledge and temporal proximity. Remedies include reinstatement, back pay, uncapped compensatory damages (emotional distress damages) and attorney fees and costs.

Whistleblowers that have suffered retaliation for disclosing fraud on the government or attempting to stop fraud on the government can also bring a retaliation claim under the whistleblower protection provision of the False Claims Act. There are important differences between these remedies, which are summarized in the following table. Some of the advantages of the False Claims Act’s anti-retaliation provision include double back pay and no requirement to exhaust administrative remedies (as opposed to NDAA retaliation claims, which must be filed initially with an Inspector General). The NDAA protects a broader range of disclosures and the burden of proof is more favorable to whistleblowers than the burden under the FCA.

Whistleblower protections under the False Claims Act and the NDAA: 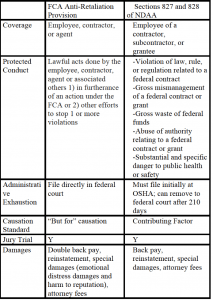