Comcast’s complaint informs the court that it serves millions of cable subscribers and has its central headquarters in the district.  Eclipse does business out of Delray Beach, Florida, but does not “manufacture, produce, and/or sell any products or services.”  Entities, who hold patents and bring infringement actions, but do not manufacture, produce, and/or sell any products or services are often referred to as “Non-Practicing Entities” or NPEs in legal proceedings and, on occasion, by more pejorative terms in informal settings by their legal adversaries.  Specifically, Comcast alleges that “Eclipse is in the business of patent licensing through the threat of litigation.”  This allegation was supported by a letter to Comcast attached as an exhibit, which “warns that Eclipse ‘aggressively litigates patent infringement lawsuits.’”

As background to its claims, Comcast discloses that the inventor is an attorney in a law firm named after him, who resides in the District.  The complaint discusses another case, United Parcel Service, Inc. v. Eclipse IP LLC, Case No. 1:11-cv-02138-CAP in the Northern District, was resolved by Eclipse’s delivery of a covenant not to sue to United Parcel.  Comcast further refers to another case in the District between Eclipse and FedEx Corporate Services, Inc. - Case No. 1:13-cv-00275-AT, which was also resolved by a covenant not to sue and reported in our blog.  The implication is that Eclipse has previously threatened suit, engendered a declaratory judgment action from the threatened party, and then quickly ended the litigation with a covenant not to sue.

The patents relate to “[s]ystems and methods . . . for automated notification systems.”  Inventors are permitted to be their own lexicographers and, in this instance, the inventor repeatedly uses the term “Mobile Thing,” as can be seen in some of the selected figures from the '110 patent that appear below: 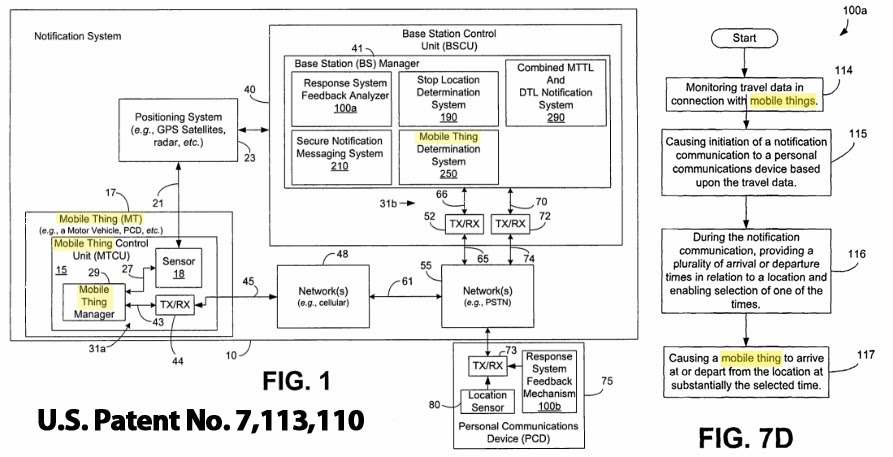 After receiving the letter alleging infringement of the ‘681, ‘110, and ‘716 patents, Comcast requested the factual and legal bases of the allegations.  According to the complaint, Eclipse refused, advising Comcast the “'the next step will be litigation.’”  This prophecy was fulfilled by Comcast with the filing of this action seeking a declaratory judgment of no infringement by Comcast’s “automated dynamic dispatch technology” and a further declaration that the relevant claims of the patents are invalid because (1) they “purport to cover subject matter that is not patentable;” (2) “they are anticipated and/or rendered obvious by the prior art;” (3) “the applicant and sole inventor did not himself invent the subject matter sought;” and (4) “they are indefinite, not enabled, and/or lack sufficient written description.”  Therefore 35 U.S.C. §§ 101, 102, 103, and 112 were all invoked.

Comcast also seeks to have the case declared exception under 35 U.S.C. §285 and requests the award of attorney fees.