The North Face Apparel Corporation can add its name to the growing list of retailers who have been sued for allegedly making unauthorized use of graffiti artists’ intellectual property. In a lawsuit filed in federal court in California on January 12, Leonard Hilton McGurr, a graffiti artist better known as “Futura,” claims that the manufacturer of winter outerwear has made unauthorized use of one of his distinctive design elements, which appears in many of his works. Coupling that design with the product line name “FUTURELIGHT,” the lawsuit contends, intentionally misleads consumers into believing that there is an association between the graffiti artist and the apparel company.

According to the complaint, McGurr began his career in the 1970s as one of the pioneers of street art in New York City. Although he is known primarily as a graffiti artist, he has also worked as an illustrator and graphic designer of album covers,  first becoming involved with British punk rock group, The Clash. In fact, McGurr toured extensively with the band, spray-painting backdrops on stage while the band played. He has also collaborated with a number of well-known retail brands, including Nike, Uniqlo, the New York Mets, the New York Yankees and BMW. In addition, McGurr designs his own clothing under the label Futura Laboratories.

McGurr claims that over the years, he has become known for a “signature element” that appears repeatedly in his various works, which he describes as a particular stylized depiction of an atom. This “atom design” can be seen in the images accompanying this article. According to the complaint, McGurr has “often” used this “atom design” as “a traditional logo, to identify himself as the source of consumer products he offers, including apparel.”

Samples of McGurr’s “atom design,” as it appears in his artwork and on certain goods: 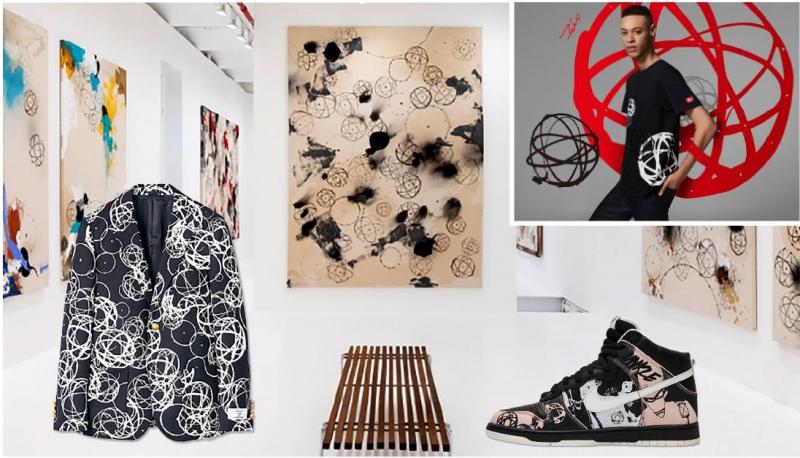 The North Face is hardly the first retailer who has been accused of co-opting the distinctive designs of street artists. To the contrary, the company is only the latest addition to a list of defendants that includes American Eagle Outfitters, Coach, Fiat, General Motors, H&M, Epic Records, McDonald’s, Mercedes-Benz, Moschino, Roberto Cavali, and Starbucks. Read “Gambling With Graffiti: Using Street Art on Goods or in Advertising Comes With Significant Risks” in the Summer 2020 issue of Kattison Avenue.

But McGurr’s claims are somewhat different from the claims that street artists have typically asserted against retailers. For one thing, the primary claim that most street artists assert is for copyright infringement, based upon the alleged uses of the artists’ works in fabric designs, on product labels, or in advertisements. McGurr alleges in the complaint that he “brings this action for copyright infringement,” but he does not actually allege any such claim. This may be due to the fact that McGurr has never registered his “atom design” with the U.S. Copyright Office, an essential prerequisite to commencing a copyright infringement action.

Instead, McGurr alleges unfair competition under the Lanham Act. The Lanham Act generally prohibits the use in connection with goods and services of “any word, term, name, symbol, or device” or any “false designation of origin” that is likely to cause confusion or mistake (1) as to the affiliation, connection or association of such goods or services with another person, or (2) another person’s sponsorship or approval of those goods or services. McGurr also seeks to cancel The North Face’s trademark registration for its “FUTURELIGHT” logo.

McGurr is certain to face any number of challenges as his litigation proceeds. For one thing, it is not clear from the allegations of his complaint that McGurr has, in fact, used his “atom design” as a “source identifier” for goods or services. It is also not clear that this “atom design” is so uniquely affiliated with McGurr that any purchasers of gear sold by The North Face did so because they believed the items were sponsored by, or somehow affiliated with, McGurr.

Nevertheless, the retailer now faces at least some risk of liability, which could include the disgorgement of any profits The North Face earned as a result of its use of the “atom design” in combination with the “FUTURELIGHT” mark. And it certainly will incur legal fees unless the company quickly settles the lawsuit.