Not Taking it Lying Down: Lawsuit Launched over MATTRESS SAFE® 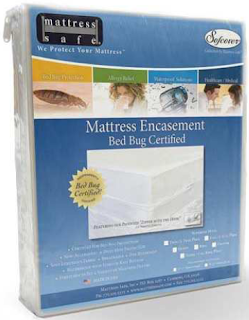 Mattress Safe is the named owner of record of the following U.S. Trademark Registrations, each for certain specified bed products: Nos. 3,224,992and 3,184,575, for the marks MATTRESS SAFE, the latter including the design shown at left (respective assignment records here and here); No.3,149,778, for the mark SOFCOVER (assignment record here); and No.3,507,477 for the mark KLEENCOVER (assignment record here).  Collectively referring to these marks as "the Mattress Safe Marks," the complaint alleges that Mattress Safe has sold bedding products under the MATTRESS SAFE and SOFCOVER marks for at least the last 8 years, and under the KLEENCOVER mark for the last 5 years.  Mattress Safe refers to Exhibit B to its complaint (excerpt shown at left) as an example of such trademark use.

"Mattress Safe previously attempted to terminate the Second Distributorship Agreement on July 12, 2012 by written notice to Defendant," states the complaint, but Hospi-Tel's counsel threatened to file a temporary restraining order to prevent such termination.  The parties then "agreed to a 45-day standstill" to expire on September 9, 2012, for the purpose of trying to resolve their differences without legal action, according to the printout of an e-mail chain between counsel attached as Exhibit I to the complaint.

The parties were unsuccessful, however, in resolving their differences, despite continuing to engage in discussions past September 9, according to the complaint.  Mattress Safe alleges that it then sent an "affirmative written notice," on December 10, 2012, that it would not renew the Second Distributorship Agreement at the end of December 31, 2012.

The complaint asserts counts for trademark infringement and federal unfair competition under the Lanham Act, violation of the Georgia Uniform Deceptive Trade Practices Act, common law misappropriation and conversion, and for a declaratory judgment.  On that last count, Mattress Safe contends that it validly exercised its option to not renew the Second Distributorship Agreement, and that, in the alternative, the agreement was terminable at will for lacking a finite term provision.  In addition to that declaratory relief, Mattress Safe seeks injunctive and monetary remedies under the Lanham Act, as well as attorneys' fees which it says are due pursuant to § 13 of the agreement.