In October, the German Federal Cartel Office (Bundeskartellamt, "FCO”) published new guidelines on its leniency program and on the setting of fines in cartel proceedings.1 The guidelines substantiate the changes in the law resulting from the 10th Amendment to the German Act against Restraints of Competition (Gesetz gegen Wettbewerbsbeschränkungen, “ARC”) earlier this year2 and provide important information on how the competition authority exercises its discretion.

Until recently, the FCO had not explicitly promoted systematic compliance efforts by companies since (i) the fulfillment of antitrust obligations is the sole responsibility of the companies, and (ii) an antitrust violation with an existing compliance program might indicate that the latter was not functioning (properly). To the extent that a compliance program enabled violations to be uncovered at an early stage, immunity from or a reduction in fines could have been obtained through self-reporting under the leniency program.

As a result, compliance systems were recommended to avoid organizational culpability, but were not taken into account in the calculation of fines.

While they continue to be relevant for avoiding personal liability of the company owner, who is otherwise uninvolved in the specific antitrust violation, for breaches of supervisory and organizational duties,3 the FCO has reconsidered its approach to the assessment of fines and, on the one hand, has aligned itself with the established practice of antitrust authorities such as the British Competition and Markets Authority and the Competition Bureau Canada and, on the other hand, has probably also reacted with foresight to a decision of the German Federal Court of Justice (Bundesgerichtshof, “BGH”).4

In the future, pre-offense efforts to prevent and detect infringements can be taken into account in the calculation of fines, both according to the text of Section 81d ARC and according to the FCO’s new guidelines on fines set on this legal basis – provided that the “objectively necessary precautions for the effective prevention and detection of antitrust infringements” have been taken.

The guidelines state that the requirement of effectiveness of a compliance management system can be affirmed if the precautions taken have led to the detection and prompt reporting of the infringement. The real news is that – deviating from its own prior position – the FCO then goes on to state that the effectiveness cannot per se be denied merely because the precautions taken did not lead to the detection and reporting of the infringement if the acting person has disregarded the company’s compliance code to an extraordinary extent and with deliberate deception of his or her superiors in order to achieve personal advantages. Thus, acknowledging that even a very good and robust compliance system can be circumvented by individuals with premeditation, the new guidelines provide that a company´s compliance efforts to prevent breaches can still lead to a reduction of fines in such cases.

However, a compliance defense is excluded if a person responsible for the management of the company (e.g., managing director or board member) was involved in the infringement.

Precautions taken after the offense to effectively prevent and detect corresponding offenses may in the future have the effect of reducing the fine within the framework of an overall consideration of the positive post-offense behavior.

For this purpose, the respective company must convincingly demonstrate the precautions taken to effectively prevent future comparable violations and clearly show a commitment to act in accordance with the law.

In order to draw conclusions about the seriousness of the compliance system, it will also be relevant whether the company is actively cooperating with the authorities to clarify the facts in question and to what extent the company has made efforts to repair the damage. 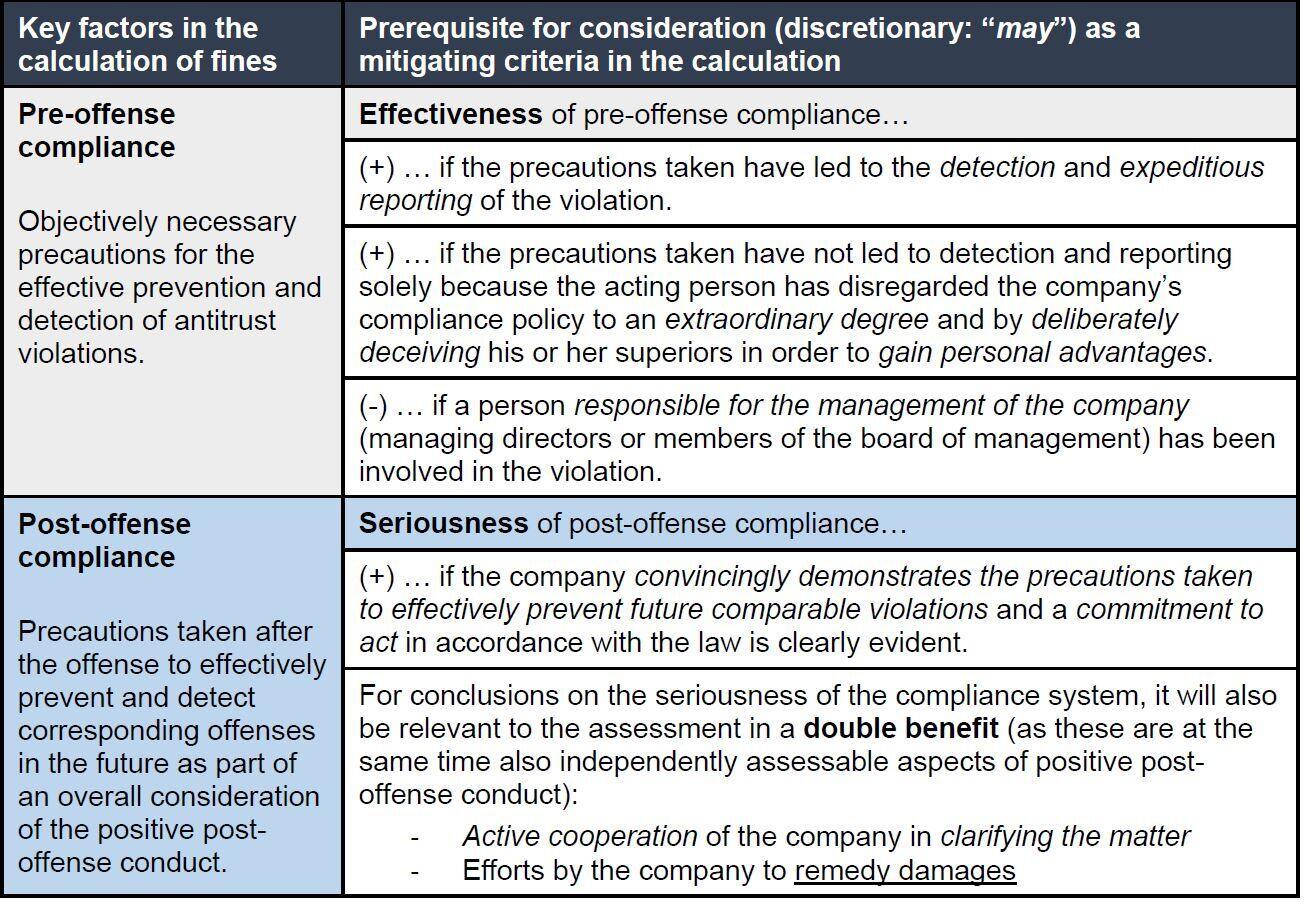 1 The guideline is available only in German, here.

How to Manage a Small Law Firm in 2022
By
Lawmatics
Supreme Court to Address Role of “Prejudice” in Evaluating Waiver of Arbitrability
By
Vedder Price
New Bill Clarifies Statute of Limitations For Community Association Transition...
By
Stark & Stark
NYC Job Postings Must Include Salary Ranges Effective May 15, 2022
By
Epstein Becker & Green, P.C.
Advertisement
Advertisement
Advertisement

Dr. Annette Mutschler-Siebert is a partner in the firm’s Berlin office. She advises clients on public procurement law as well as European and competition law. She is particularly experienced in advising clients on the design of and participation in complex procurement procedures, privatization projects and public private partnerships for both the bidding and the contracting party.

Jens Steger has been advising on international antitrust and competition law as well as antitrust compliance for several years. He and his team focus on antitrust litigation, both on the plaintiff’s as well as the defendant’s side, usually in follow-on damage litigation cases.

He also advises and represents clients in merger control proceedings before the German Federal Cartel Office and the European Commission, as well as coordinates international merger cases, which require notification to various global authorities.

Sven Klüppel is an associate in the firm’s Frankfurt office. He is a member of the Antitrust, Competition, and Trade Regulation practice group.

Alexander Rospert is an associate at the firm’s Berlin office. He is a member of the Government Contracts and Procurement Policy practice.