Python Safety sells a variety of products relating to drop prevention solutions including items such as hard hat tethers, single tool holsters, safe buckets and dual tool holsters.  Examples of these products are depicted below.  According to the complaint, Python Safety has developed an inherently distinctive trade dress for its products which is essential to its business and to customers’ identification of Python Safety as the source of the products and includes a particular appearance and color contrast.

According to the complaint, Ty-Flot offers virtually indistinguishable products to each of the Python Safety products depicted above.  Examples of products offered by Ty-Flot are depicted below. 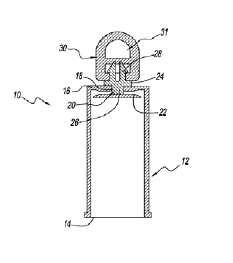 According to the complaint, Ty-Flot sells tool holders which infringe one or more claims of the '768 patent under its Grip-Fit line. An example of a Grip-Fit holder (“Accused Product”) is shown to the left.  Still according to the complaint, Ty-Flot’s Grip-Fit line also comes in six sizes, two of which have the exact diameter and four of which have a diameter approximately within a tenth of an inch of Python Safety's products.  Accordingly, Python alleges that the case is an “exceptional case” pursuant to 35 U.S.C. § 285 because of “excessive copying.” 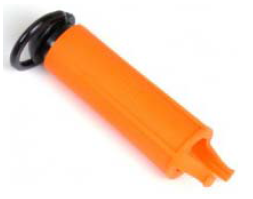 The complaint goes on to allege that Ty-Flot’s unauthorized use of the Python trade dress constitutes deceptive trade practices under the Georgia Deceptive Trade Practices Act, O.C.G.A. §10-1-370, has been with the intention of deceiving and misleading the public, and thereby attempting to encroach upon the business of Python Safety in violation of O.C.G.A § 23-2-55, has been for the calculated purpose of passing off Ty-Flot’s products as those of Python, constitutes copying and imitation of the Python trade dress, falsely designates the origin of Ty-Flot’s products, causes confusion, mistake and deception in the marketplace, and is likely to cause further confusion, mistake, or deception in the marketplace and therefore infringes Python’s common law rights in the Python trade dress in violation of the common law of the State of Georgia, and that the unauthorized use in connection with the advertising, promoting, and sale of Ty-Flot’s goods and services has unjustly enriched Ty-Flot.

Accordingly, Python seeks judgement that Ty-Flot has directly or indirectly infringed one or more claims of the ‘768 patent in violation of 35 U.S.C. § 271, an injunction restraining Ty-Flot from using the Python trade dress or doing any act that might cause confusion as to the source of products, including a compliance report and surrender or destruction of infringing materials, judgement and an order for accounting and payment of all damages for infringement of the ‘768 patent, to be trebled because of allegedly willfulness and deliberateness, ,judgement in the amount of Python’s damages for trade dress infringement, and judgement for enhanced damages, punitive damages, reasonable attorneys fees, and costs.

Jonathan Howell is an attorney with the Intellectual Property Practice Group and the Mechanical Patent Team in Womble Carlyle’s Atlanta office. Jonathan regularly assists clients with various phases of obtaining protection for their intellectual property.

Jonathan has experience in performing patent searches and in drafting patent applications and responses to Patent Office Actions, both in the United States and abroad.  He has represented clients in a broad scope of industries including product packaging,...