In a complaint filed in the Atlanta Division of the Northern District of Georgia on December 10, 2012, The American Registry of Radiologic Technologists (“ARRT”) seeks to enjoin Antonine X. Brown (“Brown”) for trademark infringement and to recover damages.

According to the complaint, ARRT is a national credentialing organization – the largest such organization of radiologic technologists – and the only one that maintains a registry of these professionals.  According to the complaint, ARRT adopted the ARRT service mark in or around 1962 and has continuously used it since that time to identify individuals who meet its educational, testing, and other requirements, and are consequently registered with the organization.

According to the complaint, Brown submitted an application to take the ARRT examination in Radiography and took the exam on February 22, 2006.  Brown did not pass the exam and has never registered with ARRT.  ARRT awards certification to individuals passing the exam and meeting other requirements of its rules and regulations.  The individual can thereafter be registered on an annual basis as long as the individual meets ARRT’s continuing education and ethics requirements.

According to the complaint, Brown repeatedly requested applications to retake the exam, was provided with those applications, but never turned them in or retook the exam.

The complaint next reports that ARRT received a request in May 2012 from Southern Regional Medical Center (“SRMC”) for the status of Brown’s ARRT status.  Upon being informed that Brown was not credentialed, SRMC allegedly sent a forged ARRT credential card bearing Brown’s name.  A facsimile copy of the allegedly forged card was included as an exhibit in the complaint.  The below image was derived from that exhibit. 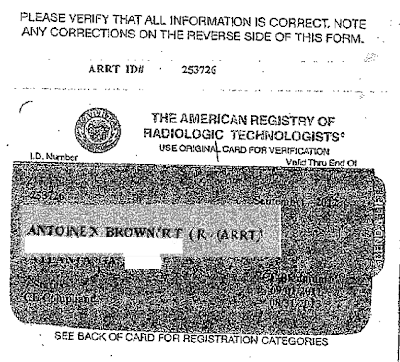 ARRT sent notices to Brown to cease and desist to which no response was received, according to the complaint.

The case is The American Registry of Radiologic Technologies v. Antoine X. Brown, LLC, No. 1:12-cv-4272, filed 12/10/12 in the U.S. District Court for the Northern District of Georgia, Atlanta Division, and has been assigned to U.S. District Judge Orinda D. Evans.