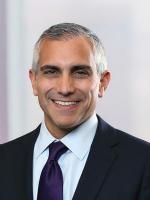 Adam is an experienced trial attorney and litigator whose practice encompasses a wide range of matters focusing on business and securities litigation, internal investigations, and government enforcement actions. Adam represents corporations, officers, directors, accountants, and other individuals in SEC investigations and enforcement proceedings, as well as in civil litigation. He routinely counsels public and private companies and others in matters involving compliance issues, including matters arising under the Foreign Corrupt Practices Act (FCPA).

Adam is Co-chair of the firm's Securities Litigation Practice.

As part of the firm’s EB-5 practice working group, Adam also represents regional centers, issuers, and borrowers in connection with both routine and complex issues that arise in EB-5 transactions. He also counsels EB-5 regional centers and issuers in risk mitigation and policy development, as well as on FCPA issues in connection with the marketing of EB-5 investments outside the United States.

In 2001 to 2002, while on leave from the firm, Adam practiced as a Special Assistant District Attorney in the Middlesex County (MA) District Attorney’s Office. During that time, he prosecuted and tried numerous drug, assault, domestic violence, and motor vehicle cases in bench and jury sessions and argued bail hearings, motions to suppress, and probation violations and surrenders.

In addition to his litigation experience, Adam has published numerous articles on securities-related topics and co-authored the Securities Litigation chapter in the definitive Massachusetts Continuing Legal Education compilation, Business Torts of Massachusetts. He has also served as a trial advisor to the Harvard Law School Trial Advocacy Workshop.

During law school, he served as executive case and note editor of the New England Law Review. Adam was also a New England Scholar, and was twice a recipient of the Trustees' Academic Scholarship Award.

Adam also serves as a member of the Joint Bar Committee on Judicial Appointments, an independent and nonpartisan entity responsible for reviewing the qualifications of applicants for judicial appointment to all courts of the Commonwealth of Massachusetts.