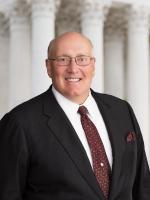 First-chair intellectual property litigator and counselor Brad Olson advocates and protects the rights of businesses and individuals across the United States and internationally. Decades of experience aid Brad in analyzing even the most complex problems quickly and efficiently – with the goal of better positioning his client against the opposition to achieve the desired outcome.

Brad has been involved in virtually all aspects of patent litigation, including the handling of discovery, motion and trial practice, retaining experts and consultants for trial, coordinating jury focus groups, and preparing witnesses for deposition and trial testimony. He has prepared and negotiated complex intellectual property rights transfer agreements, including patent litigation settlements, patent licenses, and computer software and hardware agreements.

Brad represents clients in high-stakes IP disputes under Section 337 of the Tariff Act of 1930 before the International Trade Commission (ITC). He also has experience in virtually all aspects of patent and trademark litigation in U.S. District Courts, ITC Section 337 hearings and patent litigations in the U.S. and in several European countries.

Moreover, Brad advises clients on patentability, infringement and validity issues, including anti-counterfeiting enforcement and industrial design matters with an emphasis in the biomechanical technology and biomedical and medical device fields. He has also published numerous legal articles about intellectual property issues.

While in law school, Brad served as an extern for The Honorable Senior Judge Shane Devine of the U.S. District Court for the District of New Hampshire.

Knighthood: Chivalric rank of Commander, Swedish Royal Order of the Northern Star (Kommendör av Kungliga Nordstjärneorden), bestowed by King Carl XVI Gustaf of Sweden for achievements in promoting cultural and business exchange between the United States of America and the Kingdom of Sweden, awarded April 4, 2016