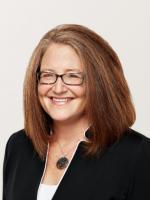 Dori has argued more than a dozen cases before the U.S. Court of Appeals for the Federal Circuit, where she served as a law clerk to the Honorable Giles S. Rich. Her experience spans a wide range of technologies, but has focused in the electrical area on semiconductor, the Internet, electronics, smartphone, and telecommunications technologies.

Dori has received numerous recognitions from The Legal 500 and Intellectual Asset Management for her patent litigation practice, including specifically for appellate work, ITC litigation and for contentious patent licensing work. In 2012, she was featured in the firm’s profile for The American Lawyer Litigation Department of the Year.

Dori spent the early years of her career involved in patent application drafting and worldwide prosecution. She worked as a patent examiner at the U.S. Patent and Trademark Office (USPTO) for three years. She has ongoing experience in reissue, reexamination, and inter partes review (IPR) proceedings before the Patent Trial and Appeal Board (PTAB) of the USPTO.

Dori has lectured on a wide range of patent topics, including defensive litigation strategies particularly as they relate to non-practicing entities (NPEs), FRAND and injunction issues, claim construction, opinion drafting, and litigation strategy. She has taught several patent litigation workshops and courses and served as an adjunct professor of patent law at Howard University School of Law.

As part of her pro bono practice, Dori represents veterans in the firm’s pro bono program, successfully briefing and arguing several appeals to the Court of Appeals for Veterans Claims and the Federal Circuit. She is listed on the Capital Pro Bono Honor Roll.