Among cases settled in 2019 with accounting-related allegations, only 6 percent involved a named auditor codefendant. This was the lowest rate in the past decade and a decline from a high of 24 percent in 2015.

The proportion of cases with accounting-related allegations that also involved associated criminal charges was 27 percent in 2019, well above the rate of 11 percent among cases settled during 2010–2018.

Figure 8: Median Settlements as a Percentage of “Simplified Tiered Damages” and Accounting Allegations 2010–2019 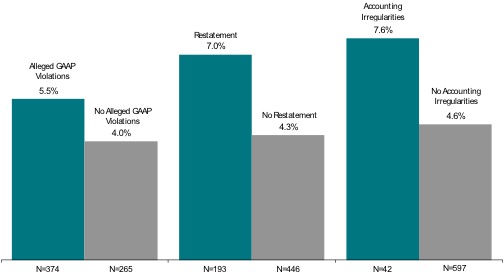 Note: N refers to the number of observations.

While settled cases involving an accompanying derivative action are typically associated with both larger cases (measured by “simplified tiered damages”) and larger settlement amounts, this was not true in 2019.

This may be due at least in part to a substantial increase in derivative actions involving smaller issuers. In 2019, 70 percent of cases involving issuers with less than $250 million in total assets also had an accompanying derivative action, compared to only 46 percent over the prior nine years.

53 percent of settled cases involved an accompanying derivative action, the second-highest rate over the last 10 years.

In 2019, 36 percent of derivative actions were filed in Delaware, the highest proportion in the past decade. The second most common filing state for derivative suits was California. 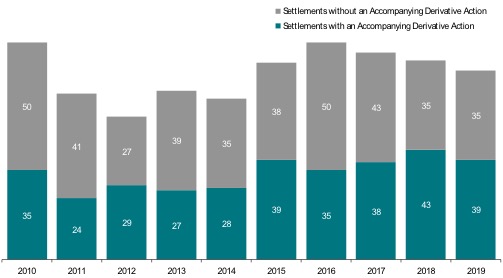 Cases with an SEC action related to the allegations are typically associated with significantly higher settlement amounts and higher settlements as a percentage of “simplified tiered damages.”[iii]

For cases settled during 2015–2019, 42 percent of cases with a corresponding SEC action involved issuer defendants that had either declared bankruptcy or were delisted from a major U.S. exchange prior to settlement.

Cases involving corresponding SEC actions may also include allegations of criminal activity in connection with the time period covered by the underlying class action. In 2019, more than 40 percent of cases with an SEC action had related criminal charges.

30 percent of settled cases involved a corresponding SEC action, the highest rate over the last 10 years. 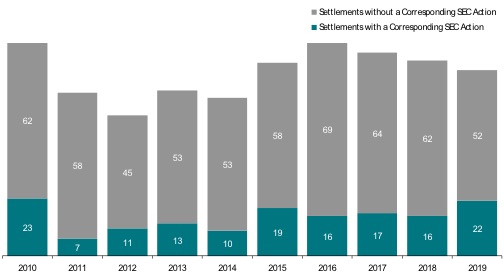 The proportion of settlements with a public pension plan as lead plaintiff reached its lowest level in the decade.

Over the last 10 years, institutional investor lead plaintiffs have also been associated with lower attorney fees in relation to “simplified tiered damages.” This may reflect their tendency to be involved in larger cases, in which attorney fees often represent a smaller percentage of the total settlement fund, as well as their potential ability to negotiate lower fees.[iv] 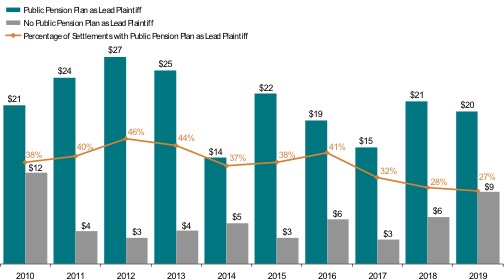 [iv]       It could be that the merits in such cases are stronger, or simply that the presence of a corresponding SEC action provides plaintiffs with increased leverage when negotiating a settlement. For purposes of this research, an SEC action is evidenced by the presence of a litigation release or an administrative proceeding posted on www.sec.gov involving the issuer defendant or other named defendants with allegations similar to those in the underlying class action complaint.

Laura Simmons is a certified public accountant (CPA) and has more than twenty years of experience in accounting practice and economic and financial consulting. She has focused on damages and liability issues in litigation involving securities and the Employee Retirement Income Security Act, as well as on accounting issues arising in a variety of complex commercial litigation matters. She has served as a testifying expert in cases involving accounting analyses, securities case damages, and research on securities lawsuits.

Prior to joining Cornerstone Research, Dr. Bulan had a joint appointment at Brandeis University as an assistant professor of finance in their International Business School and in the economics department.