Another Artist, Another Retailer, Another Claim of Appropriation

Over the course of several issues of Kattison Avenue, we have been reporting on the increase in litigation commenced by artists against retailers — clothing brands, automotive brands, and food and beverage chains — for the alleged copying of their distinctive artwork in fashion designs and marketing campaigns. So-called “street artists” — many of whom started out illegally “tagging” subway cars, bridges and overpasses but have since acquired a level of legitimacy — are largely responsible for this recent trend. More often than not, their lawsuits have asserted claims of copyright infringement, either because their works were incorporated into the design of apparel or other merchandise, or because photographs of their publicly viewable works were included in advertising materials. (Read “Gambling With Graffiti: Using Street Art on Goods in Advertising Comes With Significant Risks” in the Summer 2020 issue of Kattison Avenue and “The North Face’s ‘FUTURELIGHT’ Apparel Line is Alleged to Infringe Upon Graffiti Artist’s Name and Distinctive ‘Atom Design’” in the Spring 2021 issue of Kattison Avenue).

Roberts is a recognized “multidisciplinary” artist who works in sculpture, graphic design and painting. He has received commissions from a number of high profile clients, and his works have been exhibited at numerous venues and events, including Lyons Wier Gallery in New York, NBA Allstar Week in Chicago, NBA Art Week in Vancouver, Widen+Kennedy in Portland, New Gallery of Modern Art in Charlotte, Long View Gallery in Washington, D.C., Mocada Museum in Brooklyn, and Royal Ontario Museum in Toronto. 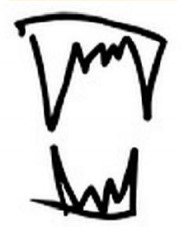 Roberts is particularly well-known for a series of sculptures that he created using recycled Nike shoeboxes. He is featured on Nike’s website and at the retailer’s flagship store in New York City, as well as at Staples Center in Los Angeles. Because of this, Roberts is also renowned among “sneakerheads,” or individuals who collect and trade sneakers as a hobby and who, typically, are knowledgeable about the history of athletic shoes. (For more information, visit https://en.wikipedia.org/ wiki/Sneaker_collecting.)

According to Roberts’ complaint, he uses a mark, which he refers to as the “Roar” mark, as his “brand image” and “calling card.” It consists of a hand-drawn outline of a set of jagged teeth:

The “Roar” mark is registered with the United States Patent and Trademark Office. Roberts alleges that he uses this mark widely, not only in connection with his artwork and art installations but also on social media and in connection with the sale of branded t-shirts, jackets, hats, posters and pins.

According to Roberts, beginning on or around June 2018, Puma started publicly using the Roar mark on merchandise and in the marketing and promotion of Puma merchandise. Specifically, Puma is alleged to have wrongfully appropriated Roberts’ “Roar” mark by extensively incorporating a similar calligraphic ink outline and contoured depiction of teeth in various lines of its apparel and other goods. Roberts seeks, among other relief, a permanent injunction prohibiting Puma’s use of the “Roar” mark, a court order that all of Puma’s merchandise, signage, advertising, labels and packaging that bear the “Roar” mark be destroyed and unspecified damages, including the disgorgement by Puma of any profits attributable to its use of the “Roar” mark.

On April 14, Roberts filed a motion for a temporary restraining order and preliminary injunction to prohibit Puma’s continued use of its allegedly infringing design on apparel and in marketing and advertising during the pendency of the litigation. On April 20, Puma opposed Roberts’ motion, arguing that a preliminary injunction is inappropriate because, among other things, it purportedly developed its teeth designs as part of “a continued focus on feline imagery, which has become closely associated with the brand known by its world-famous leaping cat logo.” According to Puma, the “designers involved in this project did not know Roberts, did not know of his art, and did not copy his work, but instead developed their own different and unique take on feline teeth.”

The court heard arguments on the motion on April 26 but has not yet issued a ruling. Because the decision whether to grant a preliminary injunction involves a judicial assessment of Roberts’ probability of succeeding on the merits of his claims (and Puma’s defenses), this ruling could have a profound impact on the course of the litigation. But, once again, a retailer’s creative decisions have, at a minimum, exposed the company to substantial litigation costs and, potentially, far more significant consequences. It is a reminder to all businesses that seek to generate “street cred” by incorporating contemporary imagery (such as graffiti-like elements) into their fashions and advertising campaigns that they should proceed with caution and have experienced counsel assess the legal risks before proceeding.