The U.S. Department of Justice Antitrust Division has inserted itself into a case that questions whether the Anti-Malware Testing Standards Organization, Inc. (AMTSO) and some of its members are creating standards in a manner that violates antitrust laws.

AMTSO says it is exempt from such per se claims by the Standards Development Organization Act of 2004 (SDOA). Symantec Corp., an AMTSO member, says the more flexible “rule of reason” applies – that it must be proven that standards actually undermine competition, which the recommended guidelines do not. 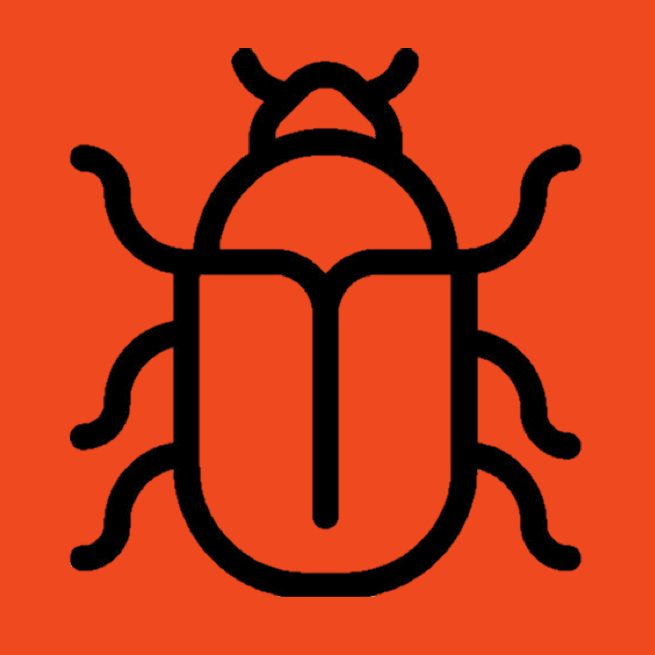 In addition to Symantec, AMTSO members include widely recognized names like McAfee and Microsoft, as well as names known well in cybersecurity circles: CarbonBlack, CrowdStrike, FireEye, ICSA, and TrendMicro. NSS Labs also is a member, but says it is among a small number of testing service providers. The organization is dominated by product vendors who easily outvote the service providers like NSS, AV-Comparatives, AV-Test and SKD LABS, NSS maintains, claims disputed by the organization.

The case is before U.S. District Judge Beth Labson Freeman in Palo Alto, who has presided over a number of high-profile matters.

AMTSO moved to dismiss NSS Labs’ suit, citing its exemption from per se antitrust claims because of its status as a standards development organization (SDO). Further, it argues that the group is open to anyone and, while there are three times more vendors than testing service providers in the organization, that reflects the market itself.

On June 26, the DOJ Antitrust Division asked the court not to dismiss the case because further evidence is needed to determine whether the exemption under the SDOAA is justified.

AMTSO countered that the primary reason the case should be dismissed has “nothing to do” with the SDOAA. NSS failed to allege that AMTSO participated in any boycott, the organization says. All the group has done is “adopt a voluntary standard and foster debate about its merits, which is not illegal at all, let alone per se illegal,” the group says, adding that the Antitrust Division is asking the court to “eviscerate the SDOAA.”

Symantec first responded to the suit with a public attack on NSS Labs itself, criticizing its methodology and lack of transparency in its testing procedures, as well as the company’s technical capability and it’s “pay to play” model in conducting public tests. NSS Labs’ leadership team includes a former principal engineer in the Office of the Chief Security Architect at Cisco, a former Hewlett-Packard professional who established and managed competitive intelligence network programs, and an information systems management professional who formerly held senior management positions at Deloitte, IBM and Aon Hewitt.

On July 8, Symantec responded to the Antitrust Division’s statement of interest. It argued that the SDOAA does not provide an exemption from antitrust laws. Instead, it offers “a legislative determination that the rule of reason – not the per se rule” to standard setting activities. “That simply means the plaintiff must prove actual harm to competition, rather than relying on an inflexible rule of law,” Symantec says.

The company wrote that the government may have a point, albeit a moot one. “Symantec does not believe so, but perhaps the Division is right that there is a factual question about whether AMTSO’s membership lacks the balance the statute requires for the exclusion from per se analysis to apply,” Symantec says. Either way, the company argues, it doesn’t matter to the motions for dismissal because the per se rule does not apply.

Judge Freeman has set deadlines for disclosures, discovery, expert designations, and Daubert motions, with a trial date of Feb. 7, 2022. 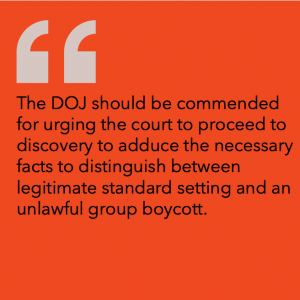 The antitrust analysis of standards setting is one of the sharpest of two-edged swords: When it works properly, it reflects a technology-driven process of reaching an industry consensus that often brings commercialization and interoperability of new technologies to market. When it is undermined, however, it reflects concerted action among competitors that agree to exclude disfavored technologies in a way that looks very much like a group boycott, a per se violation of Section 1 of the Sherman Act.

Accordingly, the Standards Development Organization Advancement Act of 2004 (SDOAA) recognizes that, when they are functioning properly, exempting bone fide standards development organizations (SDOs) from liability for per se antitrust violations can promote the pro-competitive standard setting process. But, when do SDOs “function properly”? The answer is entirely procedural, and is embodied in the statutory definition of SDO: an organization that “incorporate[s] the attributes of openness, balance of interests, due process, an appeals process, and consensus … “

The essential claim in the complaint by NSS Labs, therefore, is that the rules and procedures followed by AMTSO do not provide sufficient procedural safeguards to ensure that the organization arrives at a pro-competitive industry consensus rather than a group boycott for the benefit of one or a few industry players dressed in the garb of standard setting.

This is a factual inquiry that cannot be countered by a legal defense that simply declares the defendant is an SDO and, therefore, immune to suit under the statute. Whether the AMTSO is an SDO under the law or not depends on how it conducts itself, the make-up of its members, and its fidelity to the procedural principles embodied in the statute. The plaintiff’s claim is that AMTSO has not followed the procedural principles required to qualify as an SDO under the Act. This is a purely factual issue and, as such, cannot be resolved on a motion to dismiss.

The DOJ should be commended for urging the court to proceed to discovery to adduce the necessary facts to distinguish between legitimate standard setting and an unlawful group boycott and it should continue to be vigilant in the face of SDOs and would-be SODs that might be tempted to use the wrong side of the standard setting sword to commit anticompetitive acts instead of the right side to produce welfare-enhancing industry consensus.

This is particularly true in vital industries like cybersecurity. Government agencies, businesses, and consumers are constantly and increasingly at risk from ever-evolving cyber threats. It is therefore imperative that the cybersecurity market remains competitive to ensure development of the most effective security products.

This article was edited by Tom Hagy for MoginRubin.

Mr. LaComb is an Associate in MoginRubin LLP’s San Diego office and his practice focuses on antitrust, unfair competition, and complex business litigation, particularly as they relate to mergers and acquisitions. Prior to joining MoginRubin LLP, Mr. LaComb was an Associate at Robbins Geller Rudman & Dowd LLP where he helped secure several multi-million-dollar recoveries for shareholders in merger-related class action litigation.  Through his extensive experience in complex litigation, he has developed an expertise and proficiency in electronic and other discovery-related issues.  Mr. LaComb also worked as a Transaction Associate at David F. Grams & Associates, S.C. immediately after law school. He is admitted in both California and Wisconsin. Tim earned his J.D. from the University of Wisconsin School of Law, where he was on the Dean’s List and a member of the UW Law Moot Court Board, and earned his B.A. in Economics from the University of San Diego.