EEOC Roundup, Part I: 10 Things to Know About the 2020 Charges and Litigation Statistics

s 2021 begins to unfold, we thought employers might benefit from a glimpse into the U.S. Equal Employment Opportunity Commission (EEOC)—where it has been and where it is going. We will begin this multi-part blog series with a snapshot of the EEOC’s own fiscal year (FY) 2020 Enforcement and Litigation Statistics, which the agency released on February 26, 2021. Our analysis of the Enforcement and Litigation Data provides a granular view into the agency’s enforcement efforts during the past year and offers some insights into what employers can expect going forward in 2021.

Charges and Litigation in 2020 by the Numbers

An overall downward trend in numbers of charges and litigation, and an overall increase in recovery for private sector claimants were the overarching themes reflected in the EEOC’s FY2020 Enforcement and Litigation Statistics reporting. The agency touted securing $439.2 million for private sector claimants, including approximately $333.2 million through mediation, conciliation and settlements of charges, and $106 million through litigation in FY2020, significantly overshadowing the $385 million it secured for claimants in FY2019 and $407 million in FY 2018.

At the same time, FY2020 saw the lowest number of charges received from workers in more than two decades. The agency received 67,448 charges—continuing the steady downward trend since 2017 in the numbers of discrimination charges filed with the EEOC.

Despite increased recovery overall, monetary resolutions of charges decreased by $13.4 million, from $346.6 million in FY2019 down to $333.2 million.

Retaliation continues to be the most frequently filed claim included in charges with the EEOC—an astounding 55.8 percent of all charges filed in FY2020 included a retaliation claim, and we do not expect that trend to change any time soon. Categories of claims that showed a slight increase in frequency were disability and color, while genetic information claims saw over a two-fold increase from the prior year. Otherwise the remaining categories all saw slight decreases.

The breakdown, in descending order, of the frequency of claims filed in FY2020 are as follows: 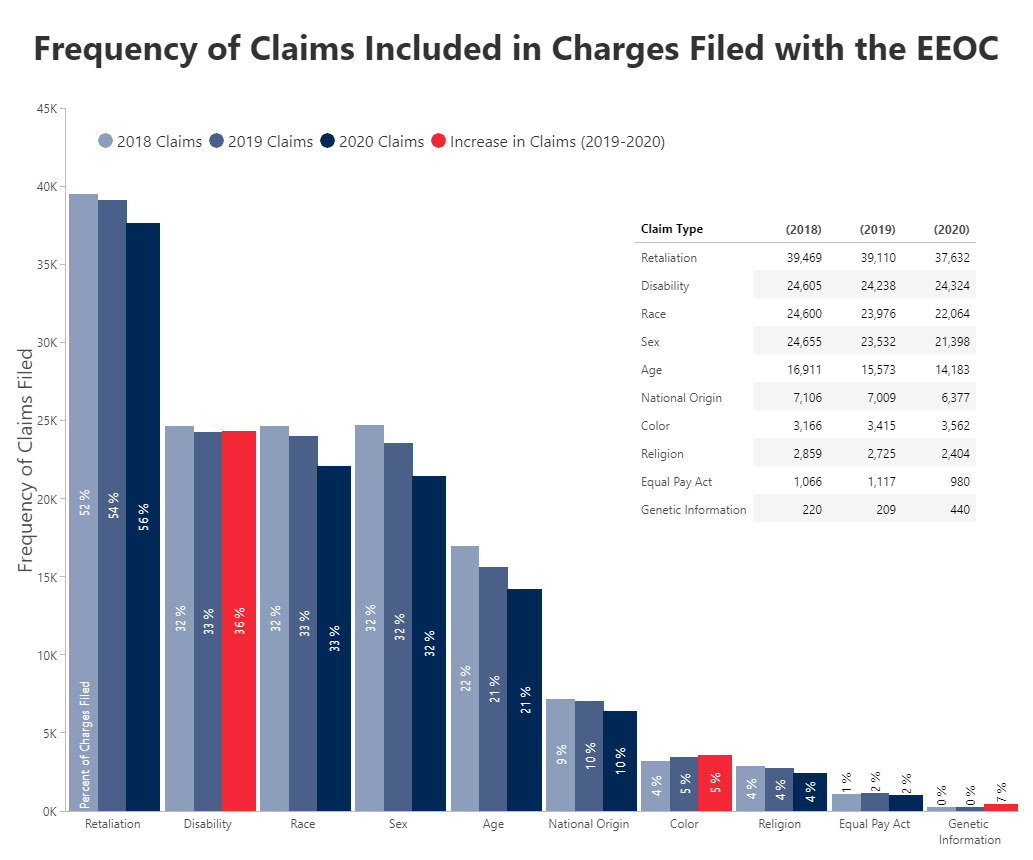 While COVID-19 significantly affected 2020 in many ways, the EEOC’s fiscal year 2020 statistics (which ran from October 1, 2019 through September 30, 2020) only encompassed data from approximately seven months of the pandemic. Recently, EEOC Chair Charlotte Burrows, who was newly appointed, emphasized her view that the pandemic is not only a health and economic crisis, but also a civil rights crisis. As noted above, during FY2020 claims of disability discrimination saw a small uptick in frequency, while genetic information claims saw a considerable increase. Charges that included claims of discrimination based on color also increased slightly. On the other hand, national origin and race discrimination claims showed a slight decrease in frequency despite concerns related to discrimination against Asian Americans and people of Asian descent in the workplace during the pandemic and the larger context of social justice issues that came to the forefront during 2020. The full impact of the pandemic and the social justice movement remains to be seen and a combined review of FY2020 stats with next year’s enforcement data will likely help shed additional light on the impact of these issues on charges filed with the agency.

Reducing its backlog of pending private-sector charge inventory continued to be an area of focus for the agency. Pending charges again decreased in FY2020, this year by 3.7 percent to 41,951 charges—which is the lowest in 14 years.

Once again, in 2020 more charges were filed in Texas than any other state, with 6876 and Florida came in second with 5868. Pennsylvania followed in third with 4599. The visualization below shows by state where claimants filed most frequently in 2020. 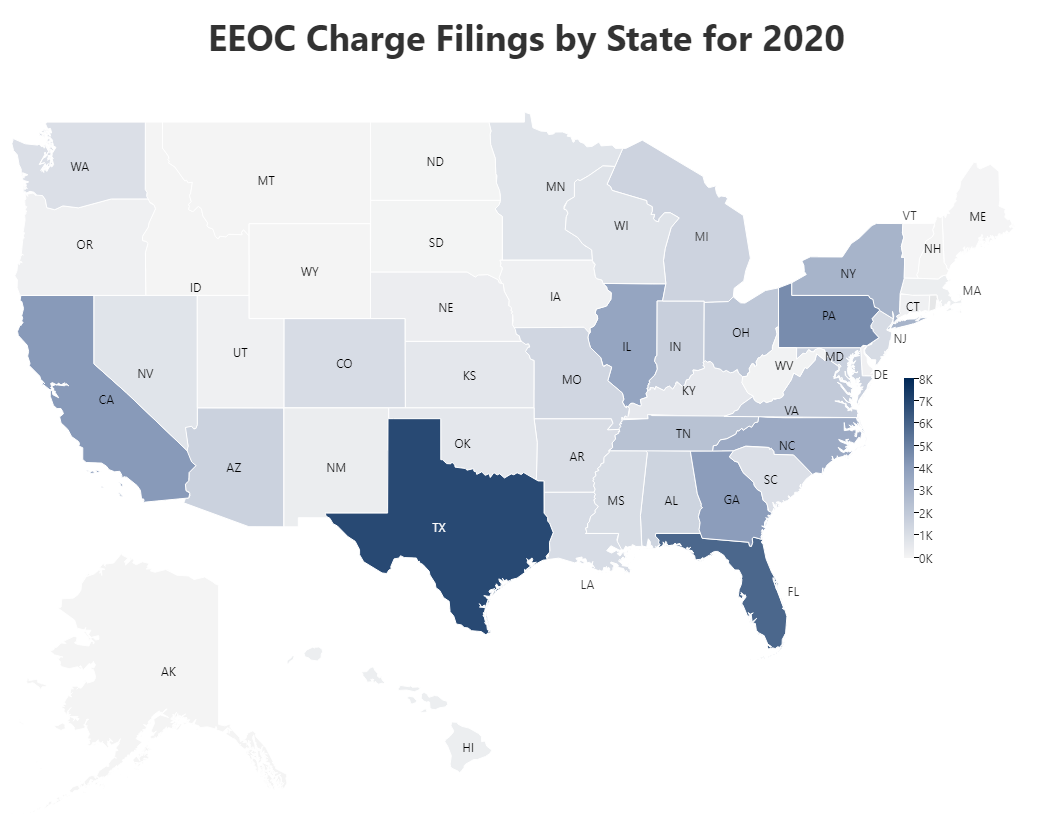 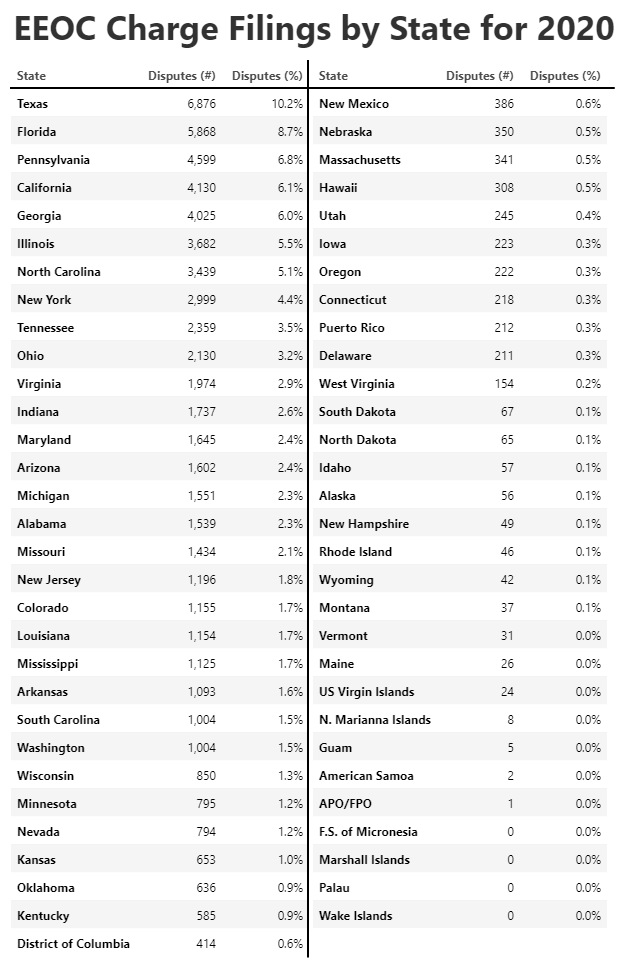 For FY2020, during part of which the EEOC utilized a mediation pilot program that expanded opportunities for mediation and incorporated video technology for virtual mediation, the EEOC reported that it achieved 6,272 successful private sector mediations resulting in over $156.6 million to claimants—slightly less than $159 million in FY2019.

Stay tuned for part two of our EEOC Roundup series, where we will discuss policy and personnel issues at the agency.

Ogletree Deakins’ employment lawyers are experienced in all aspects of employment law, from day-to-day advices to complex employment litigation. Our litigation practice includes deep experience with myriad laws governing the workplace, including Title VII of the Civil Rights Act of 1964, the Civil Rights Act of 1991, the Equal Pay Act, the Age Discrimination in Employment Act, the Americans with Disabilities Act of 1990, the Family and Medical Leave Act of 1993, the Fair Labor Standards Act, the WARN Act and many other federal and state laws. Our workplace dispute...