On April 4, 2014, Judge Thrash issued an opinion and orderconstruing a number of claims of U.S. Patent Nos. 5,725,564 ("the '564 patent"), 5,987,359 ("the '359 patent"), 6,104,958 ("the '958 patent"), and 7,280,873 ("the '873 patent").  The four related patents, owned by Plaintiffs VitalStim, LLC, ESD LLC, DJO LLC, and Empi LLC, relate to methods and devices for treating dysphagia, a medical condition characterized by difficulty in swallowing.  The patents disclose a procedure called "neuromuscular electrical stimulation therapy," in which controlled electrical currents are applied to a patient's throat to facilitate swallowing.  Plaintiffs asserted the four patents against eSwallow USA, LLC ("eSwallow"), and the parties disputed the meaning of eight claim terms (some of which were common to multiple patents).  Judge Thrash adopted the Plaintiffs' position on each and every disputed claim term and refused to accept eSwallow's invitation to depart from the plain language of the claims. 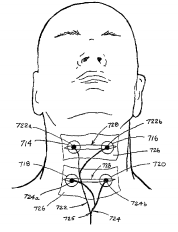 With respect to the claim term "selectively placing a plurality of electrodes," eSwallow argued that the specification only disclosed the use of "pairs" of electrodes, and thus should be so limited.  The Court disagreed, first noting that "although the Court may look at the whole patent" in construing claim terms, "particular embodiments appearing in the written description will not be used to limit claim language that has broader effect."[1]

Means-plus-function in absence of word "means"

Next, eSwallow argued that the term "governor for regulating" should be treated as a means-plus-function claim term because it lacks sufficiently definite structure.  The Court pointed to the general rule that "a claim term that does not uses 'means' will trigger the rebuttable presumption that §112, ¶6 does not apply."[2]  Judge Thrash found that eSwallow did not meet its burden to overcome the presumption, and found that "governor" was sufficiently definite.  Thus, the Court ruled that the term is not a means-plus-function claim term.

"Predetermined" limited to values in specification?

The Court again rebuffed eSwallow's attempt to limit certain claim language to the values of embodiments disclosed in the patent specifications.  Four different claim terms used the word "predetermined" (e.g., "predetermined frequency," "predetermined duration"), and the Plaintiffs argued that the word simply means a "value that is determined prior to application of the therapy."  Judge Thrash stated that "[o]nce more, the Defendant impermissibly attempts to use the specification to limit the scope of the claim terms," and noted that at no point in the specification did the patentee express an intent to deviate from the plain and ordinary meaning of the term.  As a result, the Court adopted the Plaintiffs' construction of the term "predetermined."

Finally, eSwallow argued that the word "programmed" should be ignored or eliminated from the term "output protector circuit is programmed to limit said intensity."  But again, the Court held that there was no basis in law or fact to omit the word and noted that "it is a well-established rule that claims are interpreted toward giving effect to all terms in the claim." [3]  The complete constructions adopted by the Court are as follows: